The only problematical behaviour you are likely to encounter from your budgie have been mentioned in the sections above – aggression due to hormones or jealousy, and sexual behaviour triggered by the mating season madness. Wherever one bird is causing grief to another on a regular basis, it is good policy to separate them. Don’t leap to conclusions and isolate birds as soon as they quibble, though – low level nagging is the budgie norm. 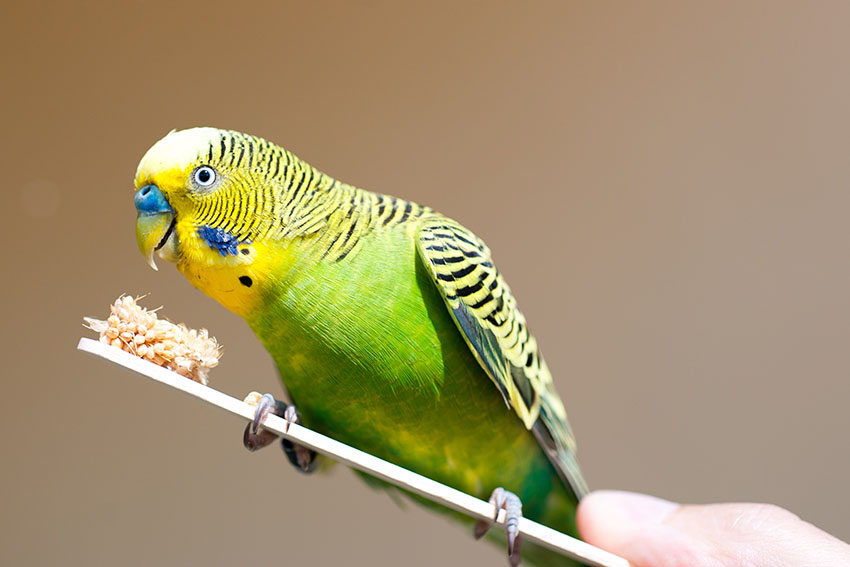 A millet stick is a handy distraction


Unwanted sexual behaviour, including the budgie rubbing its rear end on your hand or shoulder, can be discouraged by distracting him with a toy or tasty treat. Diverting his enthusiasm in this direction can help to prevent a recurrence of unwanted physical affection.

A budgie gently nibbling a finger is one thing; an aggressive attack is something else. The birds bite for a number of reasons. In the early days it’s most likely to be due to fear. You’re probably moving too fast with the relationship, and the budgie still sees your hand as a potential threat.

Some birds become territorial and will defend their cage space. Ironically, this often happens after you have finger-trained them. The problem usually stems from allowing the bird to go to and from the cage without your assistance. When you bring him out for free-flight sessions, always remove him by letting him perch on your finger first, and always return him in similar style if possible.

A bird that has bonded with you may react out of jealousy. If you have a strong one-to-one relationship, he may come to view you as his mate. Should you give anyone else your attention, your budgie may express his displeasure by biting. The only way round this is to break the monogamy, and have other people socialise more with the bird too.

Tired birds occasionally resort to biting. A budgie who is being played with when he’d rather be in bed is liable to become irritable. The answer here is to establish a regular bedtime (no later than nine o’clock), and not to play with him after that hour. 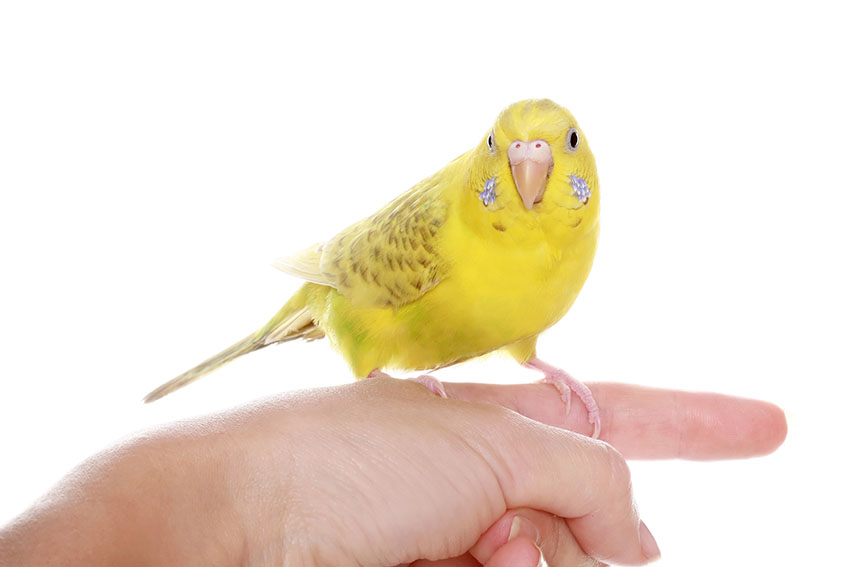 Your budgie should be perching on your hand, but not biting it


There is also the possibility that a bird is biting because he thinks you like it. Odd as this may sound, a budgie craves action and attention, and if you respond to his bite with some stern but affectionate words, they may reinforce the behaviour. You are unlikely to yell at the bird, so he is unlikely to be afraid, and the vicious circle will continue. If your pet bird has been finger-trained you can respond to his aggression by ignoring it or, ideally, removing yourself from his vicinity. With no positive feedback, the bird will eventually get the message that biting brings no reward.

Some birds bite because they know you’re about to put them back in their cage, and they don’t want to go. The best thing in this situation is to break the routine – take him out at different times, return him before the play session has finished, and give him a treat once he’s back behind bars. If the biting is a nuisance, hold the budgie gently but firmly in your hands when you return him to the cage. (See Holding a budgie, below).

If your bird regurgitates seed, don’t assume he’s sick. It’s a natural response in a male budgie, usually directed at his female mate. Hens will throw up their seed too if their breeding urge is strong but unfulfilled. Sometimes the instinct misfires, and the budgie happily offers the contents of his stomach to a mirror, a toy, or even you. Before the seed reappears, the bird will bob his head and stretch his neck – further clues that he is feeling amorous rather than ill.

A bird who is sick will vomit without head-bobbing. He will also display other giveaway symptoms, such as loose or discoloured droppings (compared to the colour of the budgie’s normal droppings), a humped posture with feathers fluffed up, a messy tail and vent, or general lethargy. If the regurgitating is ever accompanied by these signs or other out-of-character behaviour, consult a vet. 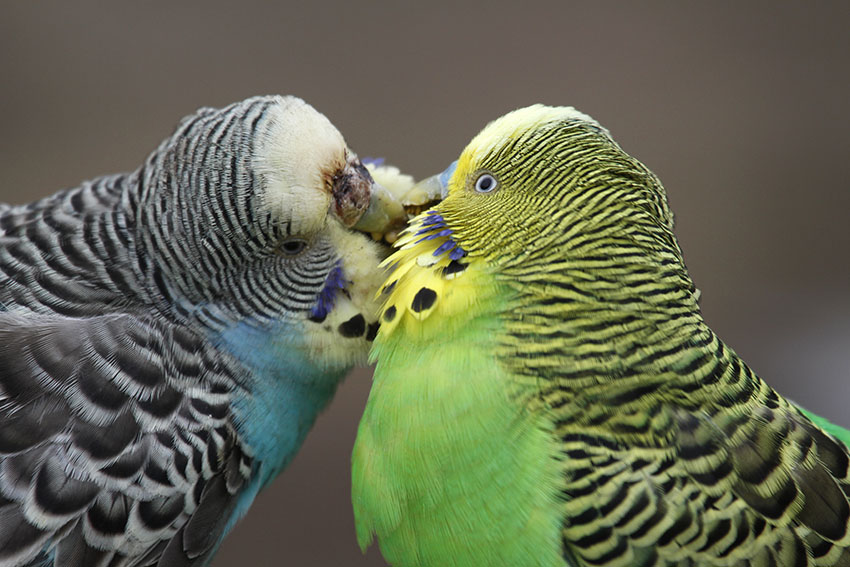 
Budgie Regurgitating on Toys or People

If your budgie is parking his undigested seed on people, on furniture, or on any object that would be better off without his messy attentions, you might want to discourage the behaviour. He’s only being affectionate, but most owners are unappreciative.

If the budgie is outside the cage when the incident happens, put him back inside. If the problem is centred on a toy in the cage, remove it. The budgie should, with time, come to realise that regurgitating on things results in those things being taken away from him, and will mend his behaviour. Don’t raise your voice or speak angrily as you return him to the cage, or the bird will become anxious and confused.

As noted above, a budgie who regurgitates regularly needs the stimulation removing. However, a bird who throws up anything more liquid than a seed-puree, or who allows the vomited food to make a mess on his feathers, is not being affectionate – he is ill, and needs treatment. There are a number of possible causes – see the Budgie health section below.

Budgie Sleeping in the Day

A couple of brief rest periods during the day – anything from ten minutes to an hour – is normal budgie behaviour. Birds in a flock will tend to nap at the same time. Some just fluff themselves up and drop to sleep; others perch on one leg; some rest their heads on their backs and tuck their heads under their wings.

If your bird seems unusually sleepy, however, it may mean that his night’s sleep was disturbed. This could be down to a number of factors, but artificial light, a prowling pet (such as a cat) or nocturnal noises are the usual culprits. A tired budgie could also be showing symptoms of an illness, so watch him closely for other tell-tale signs (see the Budgie Health section, below).

If your budgie is perched quietly (sometimes on one leg), but showing no inclination to sleep, he is probably bored. This is something you will only encounter if you keep a single bird. You should help him out at once, by socialising with him, and/or changing his toys around or maybe rearranging the cage furniture. Budgies require mental stimulation, and a dull cage with no companions is as bad as it gets.

Check for other symptoms if your bird is unusually quiet, as there is always the chance that he is ill.

Any change in your budgie’s normal behaviour is likely to be the result of hormones in the mating season (as described above). It could, however, indicate a health problem, so study your bird carefully. Changes to watch out for include: 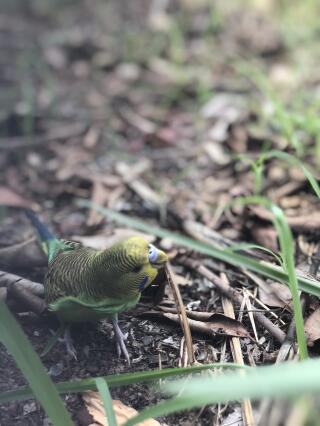 I have 4 Budgies, 2 male and 2 female. My oldest bird (1yo) She has been clinging on to the side of the cage with her beak and feet. I don't know why she dose that. She also won't eat her fruits and veggies, i am worried that she is not getting the stuff she needs. She has been more puffed up than usual today.

My Chirpy is constantly in the floor corner of the cage pulling at the side of cage. He does go up and down the side doing the same thing. We have had him a week and a half. Don’t now if he is trying to get out, bored or stressed.

Hi..I have a group of 4 Budgie..one of my female Budgie has this thing where she gets hold of a tail or wing of one of the male Budgies with her beak and i have to step in for her to let go. I have 2 Males and 2 Females..she is scared of the other Female she wont go near her..so she only does this to the males..what can i do or what is wrong that i need to change. Thank you

My budgie sits with one leg on perch, the other leg on cage and the top of her head on the perch, as if she is looking through her legs at nothing in particular, why is this?