The single, staccato chirrup! or chirp! is probably the budgie’s commonest utterance. It’s the sound of busy contentment, and means your bird is happily getting on with his life. The noise acts as a non-stop reassurance that everything is okay, and helps bond the bird in his flock. It also has a “Here I am!” function, just in case anyone was worried about his whereabouts. It’s the kind of noise a bird that can’t stop making noises needs to make when there’s nothing of particular importance to say – a bit like a person who can’t abide silence and has to fill it with monologue.

The chirrup is a versatile sound. In addition to the context given above, it can be used for getting your attention, and alerting you to the fact that there’s no food or water, or some other cage-related problem. If the chirrup is a louder, insistent tweweet!, the budgie is getting excited. This can be due to the proximity of new birds or bird sounds (chirruping sparrows shouting through an open window, for example). He may be shouting a contact call, in the hope of a reassuring response from his companions, (or from you, if you are the main companion). It can also be a sign of escalating alarm, in which case the chirruping will soon turn into squawking. 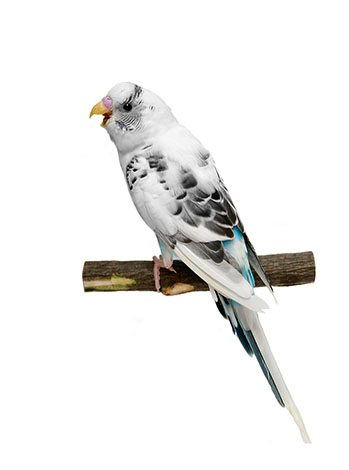 Excited or unhappy sounds are accompanied by an open beak

This is the noise no one – including the other budgies in your cage – want to hear. It means something is amiss. The bird may have been startled or frightened by something, he may be hurt, he may have sensed a predator (real or imagined), or he might just be angry because you haven’t replenished the food yet. Alternatively, it may just be a case of hormone-fuelled tempers flaring in the cage, in which case it will pass eventually. Hen birds in mating mood tend to be short-tempered and noisy.

A reassuring voice will often make her calm again. If her feathers are close to her body it means she's frightened. A cover over the cage will quieten her down, while you investigate what the problem might have been. Noise, fumes, other pets, naughty kids?

The chatter of a budgie is a sign of contentment. The sounds he makes in this mood are like a mumbled conversation; and, if you’ve taught him, there will be recognisable words and phrases in there too. He will sit still while he chatters, with his feathers fluffed up in a visible sign of happiness.

If your bird is a male, he will also chatter to show off and court females. In the absence of a flesh-and-blood object of their affections, budgies will often chatter and twitter into their mirrors, believing that the reflected bird is paying attention to their every tweet. This amorous warbling chatter is often accompanied by head-bobbing movements and erect head feathers.

Budgies use a medley of chirrups, whistles, chatter, trills and various other snippets they’ve picked up (including human speech), in a barrage of bubbling, tuneless put pleasant song. They often sing together, reassuring each other that all is well and everyone is safe. Singing is always a good sign, showing that the birds are happy and healthy. 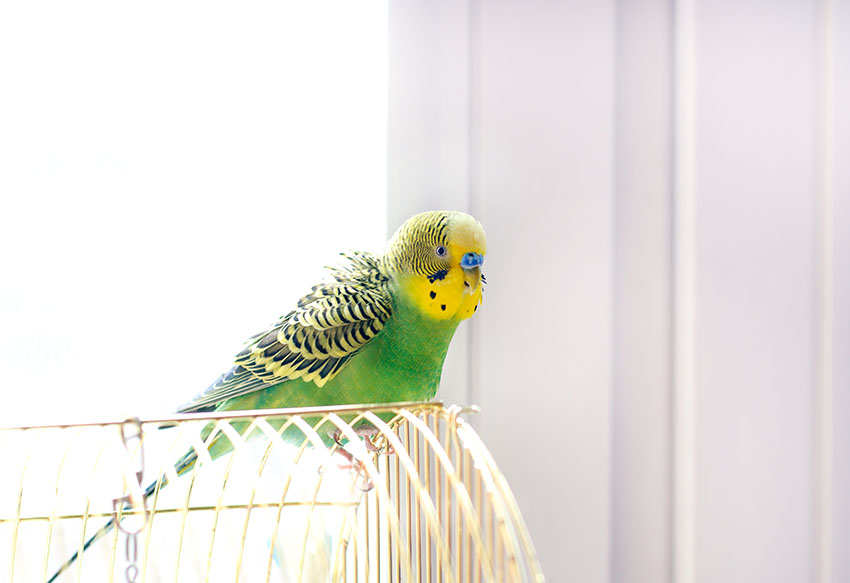 A singing budgie is a happy budgie

Budgies have a loud hiss-like noise in their vocabularies, sounding a bit like tssssk! They utter it if their personal space has been invaded and they’re feeling defensive. It will be most commonly heard when the birds are nesting, or in an overcrowded corner of a cage. It’s a warning that whoever or whatever is annoying them hasn’t intimidated them, but has merely got their temper fired up. If you hear this noise a lot, it may be a sign that there's not enough room in your cage, and the birds are forever treading on each other’s toes. In a larger aviary, chiding is simply part of the territorial push and shove of everyday budgie life – especially at crowded feeding stations.

Budgie’s aren’t chewing food when they sit on a perch making a crackling, grinding sound with their beaks. This is the budgie equivalent of a cat’s purr. It means they're deeply content, and will probably settle down to sleep very soon.

Budgies have a wide vocabulary, both musical and unmusical. They will often stumble upon a tweet or warble that they find particularly pleasing, and will repeat it from then on as part of their regular repertoire. Some birds are inspired by the noises around them – telephones, music, other pets, cars in the street, and human voices, whether real and televised. Other sounds just seem to bubble up from the bird’s musical imagination. 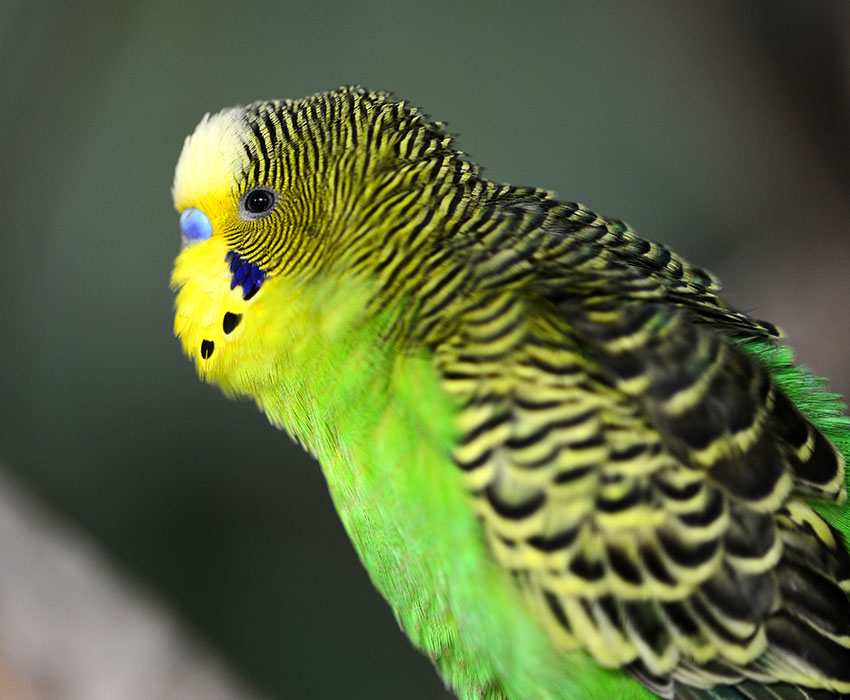 
Budgies, for all their inability to hold a good melody, are very musical little souls. They will stop what they're doing to listen to the music you’re playing, and will usually join in, maintaining a disappointed silence when the music ends. Your bird will have his preferred genres, even a favourite song that will cause great excitement every time it’s played. Sometimes a piece of music will make your budgie angry for no obvious reason, so always take note of how he behaves when music is playing, and avoid winding him up with death metal, opera, or whatever it is your bird doesn’t like.

Body language gives you additional clues to the budgie’s mood when he’s vocalising. If his feathers are drawn close to his body, making him look thinner than usual, he’s afraid or stressed. If he’s flapping his wings or spreading them away from his body, that’s another sign that he’s deeply unhappy about something. If he’s his usual, slightly fluffed-up self, he’s happy. 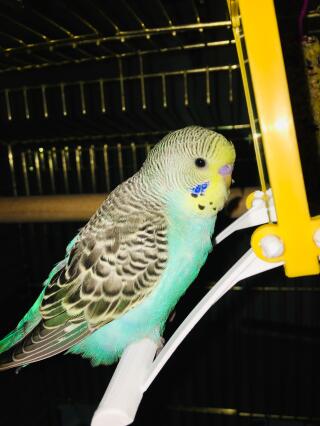 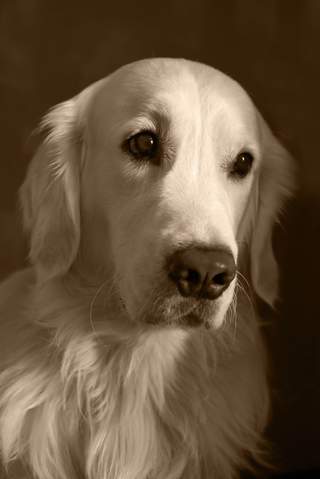 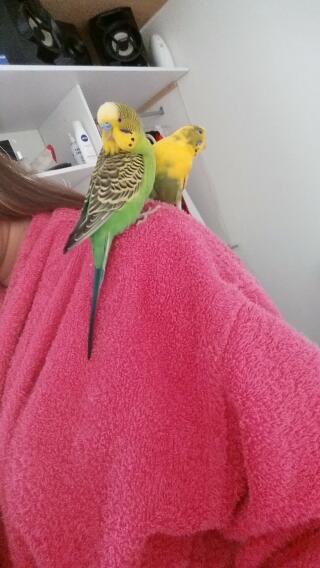 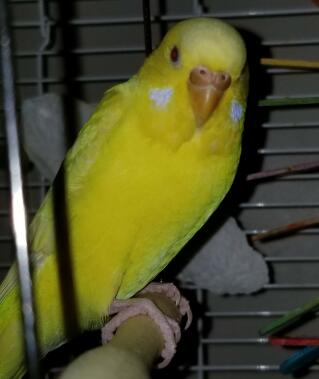 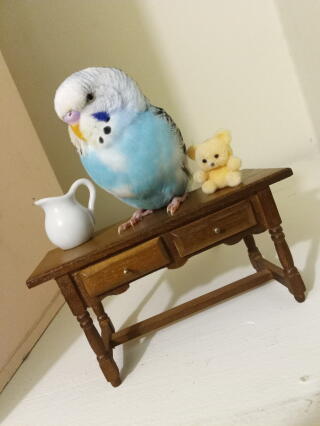 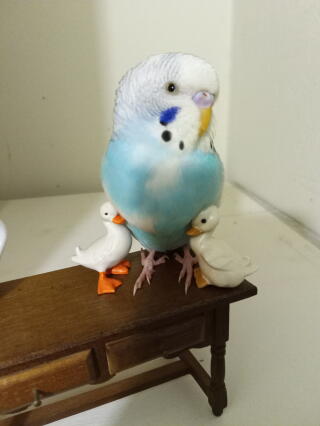 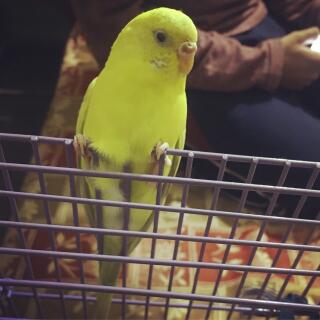 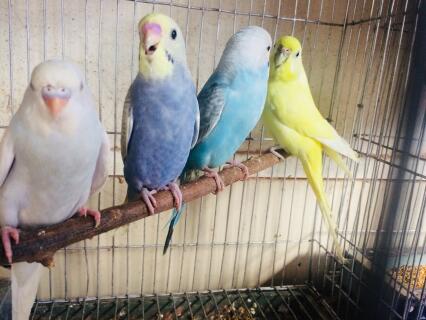 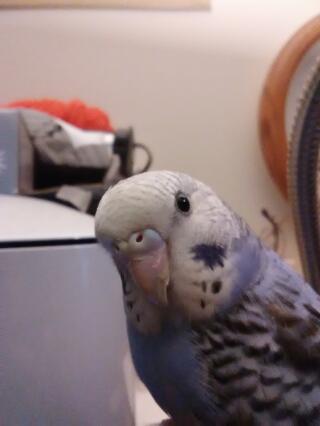 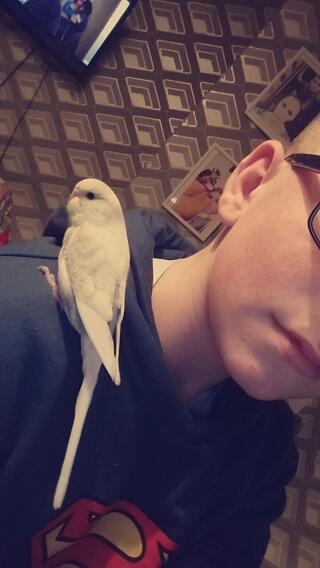 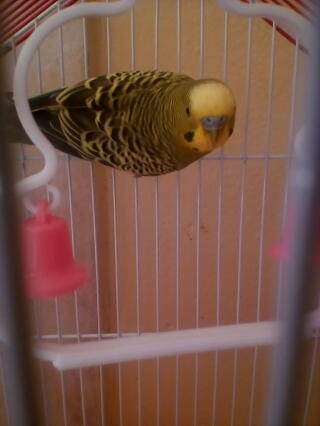 I have just got 2 young budgies a couple of days ago (from the same flock) and one is silent and the other very occasionally makes a noise, they do not explore their cage and have as yet not found the seed hoppers, (they have eaten the millet that I've hung near to the hoppers) So far the TV, music or me talking to them produces little or no response. However they become very vocal, moving about and moving from perch to perch, feeding from the millet more whenever I play budgie sounds. Should I continue with this or is that detrimental to them. They are not verbally communicating with each other even if I leave the room.

Hi, I was just wondering- my budgie makes a funny stuttering-purr sound sometimes (like a guinea pig), and we can't figure out what it means. He does this when about to sleep, being talked to (loves that), or when his space is invaded (hates that); it doesn't seem to correlate with his situation whatsoever. I really want to know in case it's a sound of discontent so I can fix the problem. Do you know what he means when he does that sound?

Responding to memememe below, yes it is. Sometimes when you disturb them in their sleep or try to pick them up when they're not in the mood, they chirp like that but it's not as fast as a raccoon makes it sound

Is it normal for my budgie to be making..... raccoon noises when threatened?