Agoutis have distinctive multicoloured ‘ticked’ coats, with two colors alternating across their back, head and legs. Only the stomach is monocoloured on most Agoutis, and often the fur around the eyes too. The Solid Agouti is a new variation, having flecked 'ticking' pattern on the stomach too. This is a relatively new type, and still very rare.

Agoutis come in various colors. Animals with sharply contrasting ticking colors are easier to identify as Agoutis than those with more uniform hues. In competitions, Agoutis with even ticking across the body tend to do best. 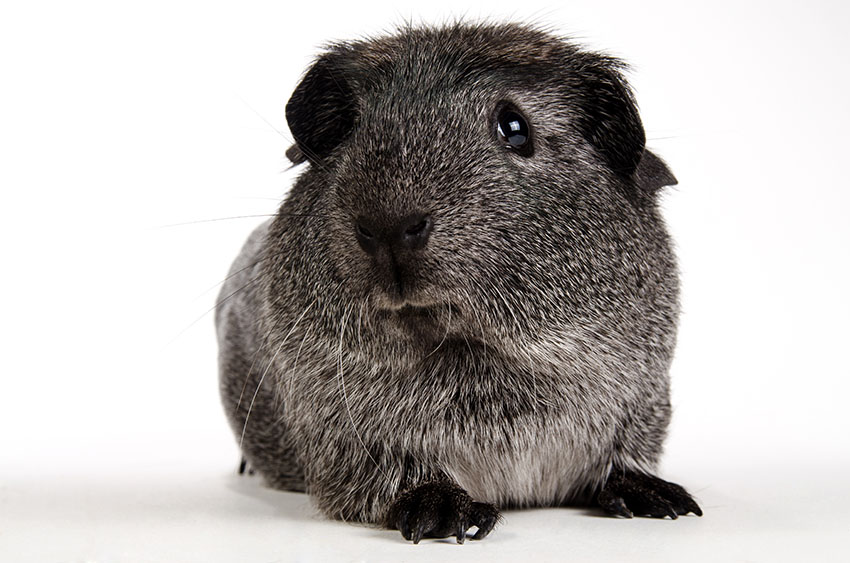 Argente guinea pigs are similar to Agoutis, having 'ticked' coats. The ticking is different on the Argente, though. They have multi-colored hairs, and the ticking/flecking effect is the result of single, dual-colored hairs rather than lots of different colors.

Argentes come in a limited range of light colors, from white and lilac to golden and beige. Unusually, they have a noticeable pink tinge to their eye. This, along with their unique coat, makes them easy to spot in a group. 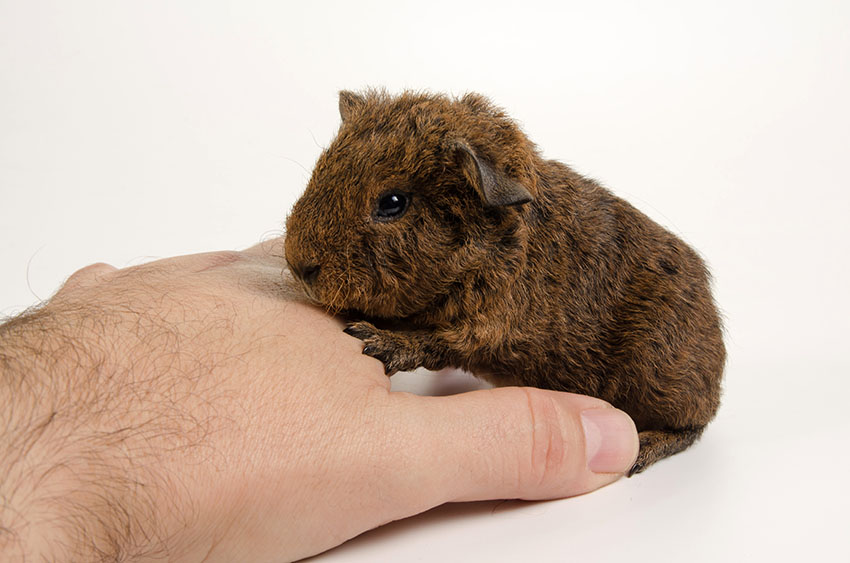 Each hair on an Argente Guinea Pig is multicoloured

Bicolors have two colors distributed in patches across the body. These patches can be almost any color; although if they are black and red the variety is called Tortoiseshell.

Successful exhibition Bicolor guinea pigs have square-cut patches made up of solid color, with a minimum of overlap and brindling, and with the patches positioned on either side of the animal's back, rather than in the middle or on the extreme edges. 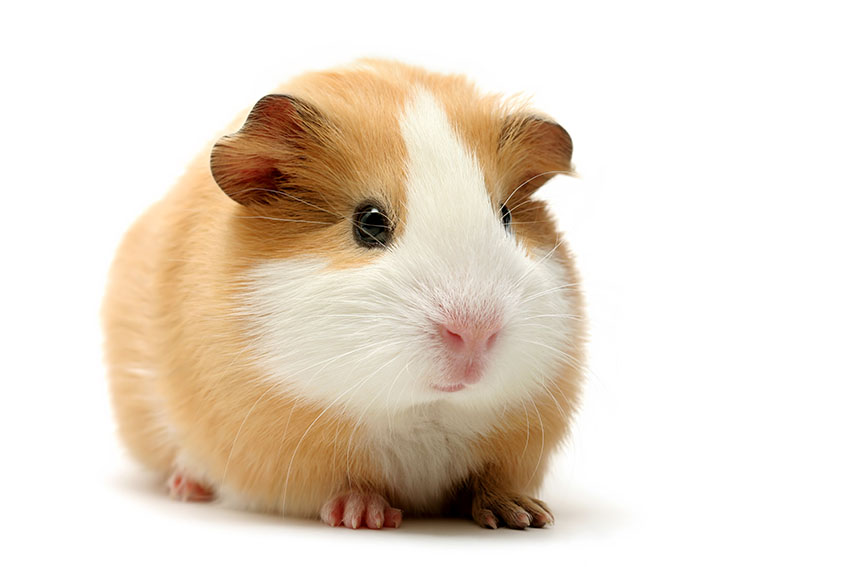 Brindle guinea pigs are similar to tortoiseshells in coloring, but with mixtures of colors rather than square patches of color. For show purposes, Brindles should have the hair as intermingled as possible, but patches of predominantly red or black do still occur.

Brindles have bright eyes and glossy fur. The fur can be smooth, and of the hairier 'Abyssinian' variety. 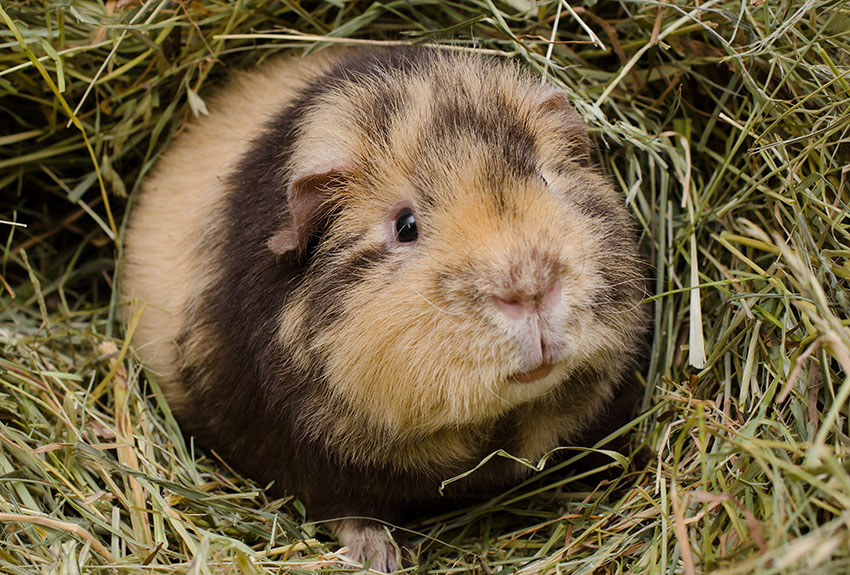 The Dalmation guinea pig has markings similar to the famous breed of dog of the same name. These GPs have large patches of color on their faces, with little of no spotting in that area. Show-winning specimens have a bright white streak down the centre of their face, and coloured feet.

A word of warning: if you’re thinking of breeding Dalmation guinea pigs, beware. Breeding two Dalmations together comes with a one in four chance of producing a malformed pup. This is because the Dalmation gene causes problems if it’s the only gene inherited. Mating a Dalmation with a non Dalmation ensures that no single pup will inherit two Dalmation genes. Such a pairing results in a 50-50 split of Dalmation and non-Dalmation babies.

Dutch guinea pigs, like Dutch rabbits, have very distinctive coats with a white chest and front legs, and a different color (or colors) on the lower stomach and rear. There are five monocolor varieties and five Agouti colors, all of them having a white area towards the front end of the animal. For show purposes, the Dutch GP's face should be the same color as its stomach, with a white triangle around the muzzle tapering off towards the top of the head. The color should be even and the coat glossy, with fine white hair on the feet and neat white toenails. 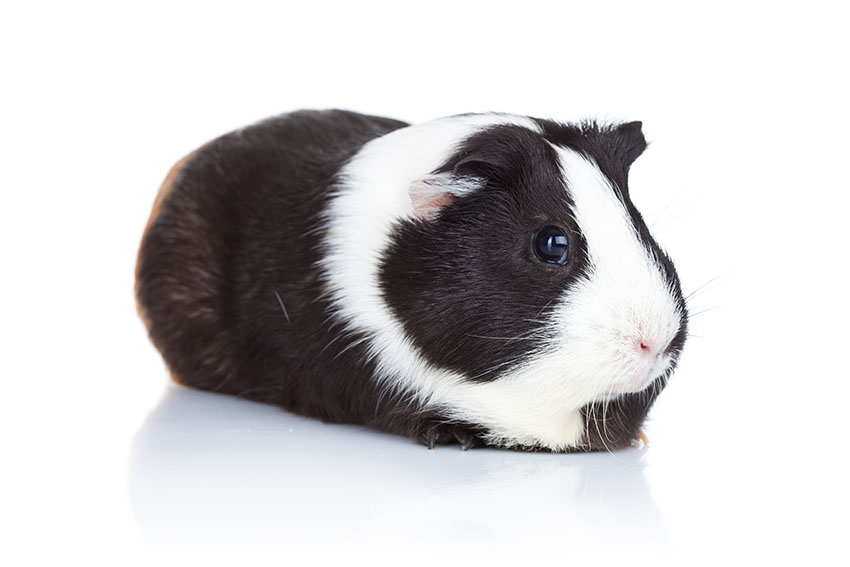 Fox guinea pigs are similar to Selfs, but with colored areas that distinguish them. the Fox has a pale area around the eyes, chest and stomach, with white ticking elsewhere on the body. They also have features called pea spots - small, white areas next to the ears. Otherwise, the main color is solid and in show animals should be clearly delineated from the white patches. The Fox comes in just four shades – chocolate, beige, black and lilac. 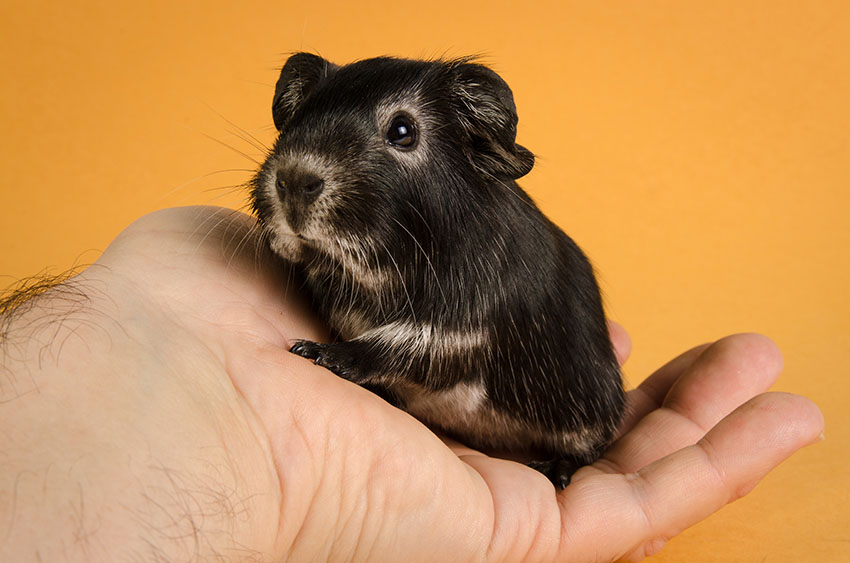 Fox guinea pigs have lovely pale areas on their coats

Himalayan guinea pigs are an albino variety, with a predominantly white coat and bright red eyes. They are the guinea pig equivalent of a Siamese cat, having a striking white coat with darkly pigmented noses, ears and feet

Himalayans come in two shades – black and chocolate. If you’re looking to show your Himalayan, one of the judging points is how stark a contrast there is between the white coat and the dark points. Rather than fading out gradually, the best examples of this breed have very small area of transition between the two colors. 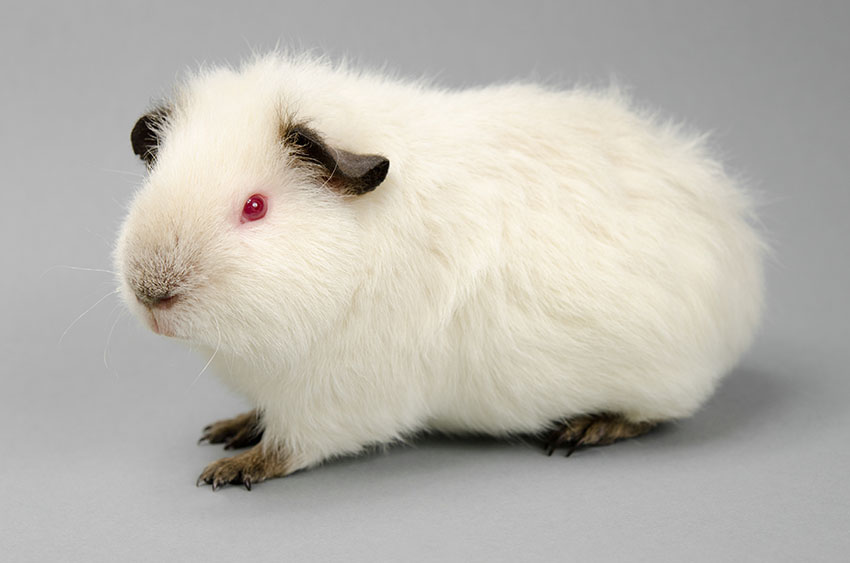 Himalayan guinea pigs have dark patches on their eyes, nose and feet.

Roan guinea pigs are bicolored without patches, but with white hairs mixed in with the dominant color. This pattern usually covers the body but not the face or feet. Roans come in various GP colors and a variety of coat types, from smooth short-haired ones to wiry and long-haired individuals.

Like Dalmation guinea pigs, Roans have a gene that causes problems in pups that inherit two copies of that gene. To avoid this, Roans should ony be mated with non-Roans. This doesn't mean you won’t get distinct Roan babies, as the laws of genetics dictates that half the litter will be Roan, as in 50% of the pups the Roan gene will be dominant.

Selfs are monocolored guinea pigs, a very common type, but with twelve different colors possible. These include cream, black, chocolate and lilac. Self guinea pigs hve smooth, non-wiry coats. Depending on the hair color, they may have eyes that differ from the usual guinea pig black, being red or pink instead.

For show purposes, Self guinea pigs should not have areas of differently-colored hair, and no darker patches on the ears. They should also have a graceful dip in the back and large, bright eyes. For non-show purposes, though, they're all cute and adorable, even if one or two hairs are a different hue! 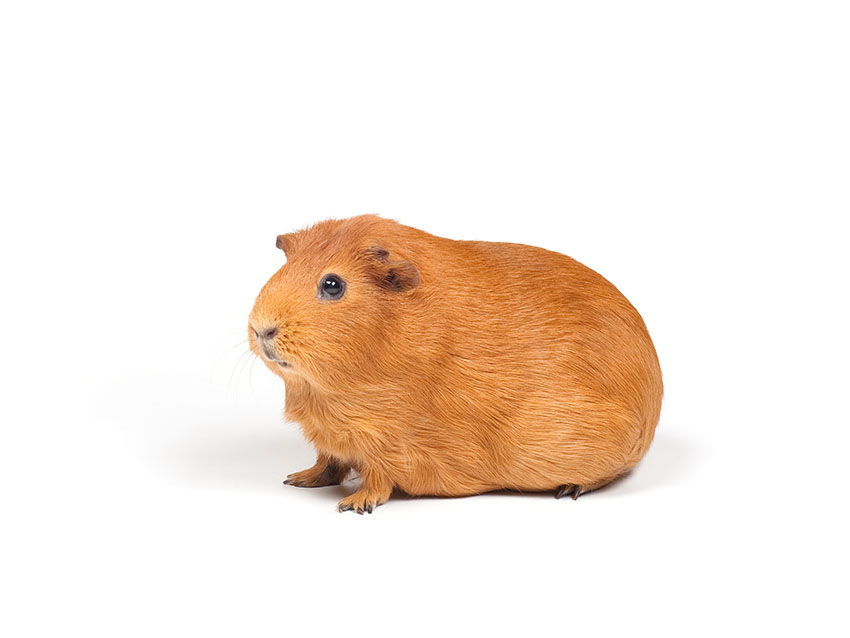 Self guinea pigs have a uniform color across their bodies

The Tan guinea pig has a single base color with tan areas. The markings are usually on the eyes, muzzle and belly, and these GPs also have little patches of color known as ‘pea spots’ next to the ears. Tan guinea pigs come in chocolate, black, lilac and beige, often with a clean band of orange around the chin (something judges look for in shows). 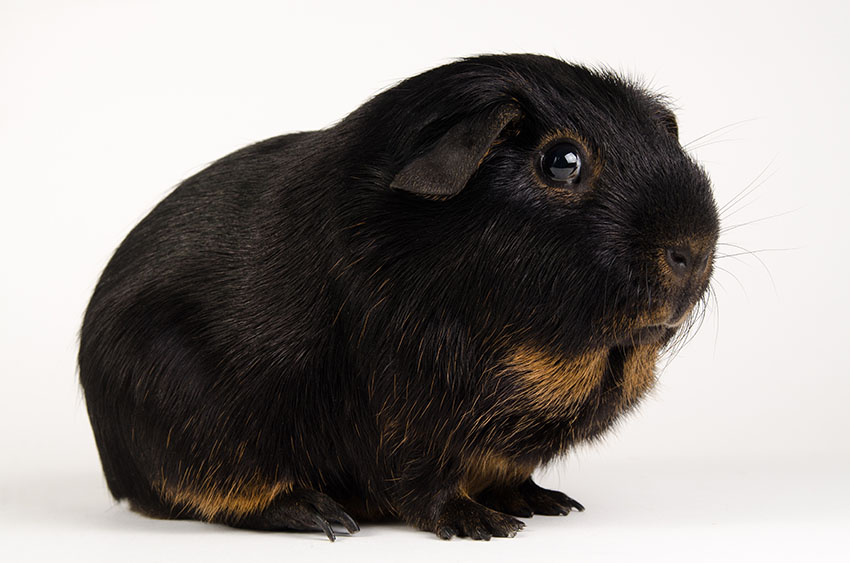 The Tortoise and White guinea pig is hugely popular, and is a real beauty. It has three colors - red, white, and black - and show-winning individuals have clear and neat delineation between these colors, to great visual effect.

There is no set show standards for where the colors should be, only that they should be arranged neatly, roughly even sized, and of a square shape. The head should be two colors, black and white, red and white, or even white and red. Judges at shows penalize T&W GPs that sport the marking known as brindling. This is where a patch has some stray hairs of another color, (but frankly, we think this makes them look great!) 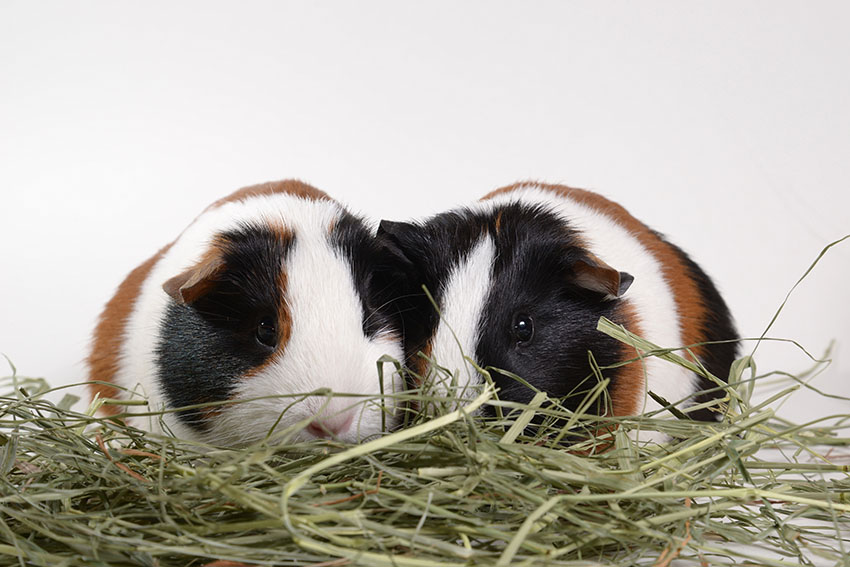 Tortoiseshell guinea pigs are red and black patched animals, with bright dark eyes - just like the more famous tortoiseshell cat, in fact. In shows, judges look for square-shaped and well-colored patches that don’t overlap with the line running down the centre of the animal's back. 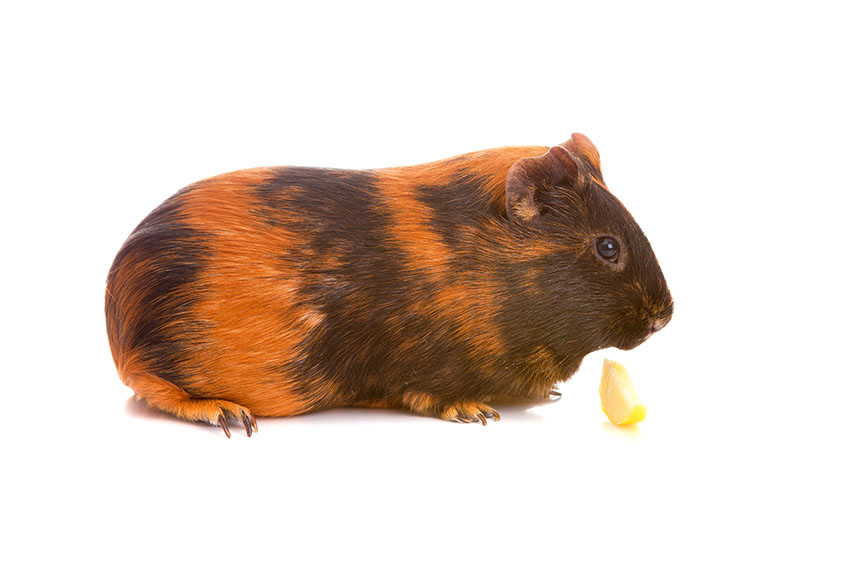 Tricolour guinea pigs have patches consisting of three different colors, with dark or pink eyes depending on their coat. Show-winning specimens have square patches that don’t overlap the line of the centre of their back, and with white patches as one of their three colors, and a minimum of brindling. 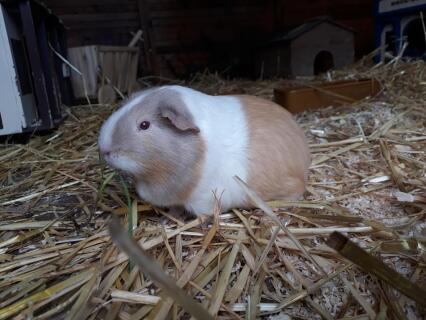 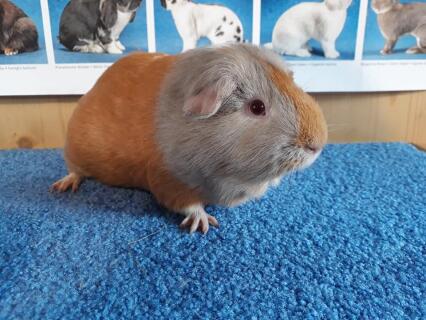