There are several guinea pig varieties available. They come in a range of colors and hair types. Here's a brief description of the most common varieties.

Most of the guinea pigs you see in pet stores and other people's homes are of the American breed. Their distinguishing feature is short, smooth hair. Colorwise, they come in all sorts of combinations. Their short coats make them very low-maintenance and easy to keep.

If entering an American guinea pig in a show, it has to adhere to one of the 19 accepted color specifications, and must have a short, smooth coat. 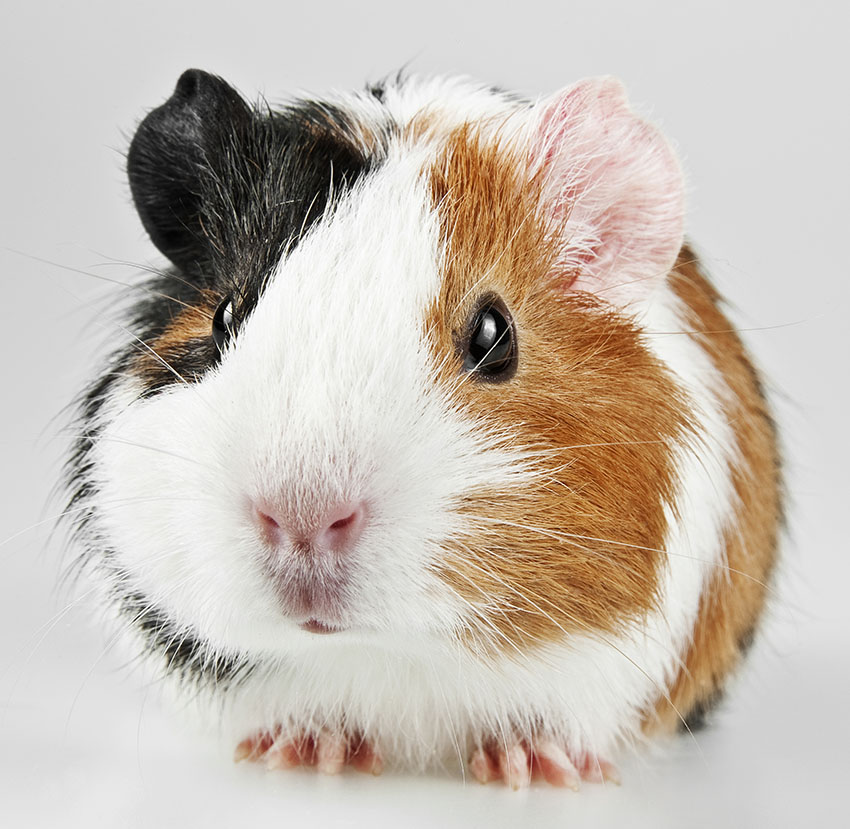 Americans are the most popular guinea pig variety

Coronet guinea pigs are very similar to Silkies, having very long, smooth hair. The feature that distinguishes them from Silkies is a feature that looks like a crown in the centre of their foreheads. This is an area of fur radiating out from a central point, often at odds with the rest of their fur and forming ridges. 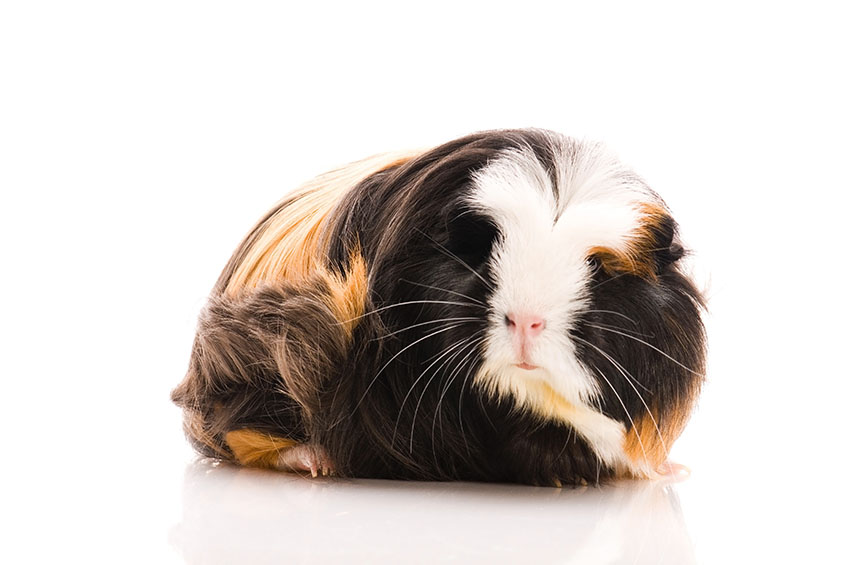 Coronets are named after their 'crown' of ridged fur

These varieties are the exception to the rule that says 'All GPs are easy to look after'. Skinny Pigs are difficult to look after properly, requiring heated accommodation and a high energy diet. They are also very susceptible to infection.

The hairless guinea pig breeds are either naked, or have a smattering of fur on their faces and their feet. They are not hypoallergenic, in spite of their hairlessness.

Although experienced owners are able to care for hairless guinea pigs properly, they are not recommended for beginners. The varieties are controversial too, as their lack of fur makes them susceptible to health problems. So, should they actually be bred at all? It's one of those pet breeding questions you meet all too often (in the case of Pugs in the dog world, for example).

Skinny Pigs are guinea pigs with very little hair, or none at all

Peruvian guinea pigs are a common smooth, long-haired variety. Their fur sprouts in multiple directions, and if allowed to grow out without trimming (which is not recommended) it would be so long that the poor guinea pig would have trouble moving around, and its face would be covered. With regular trimming, the hair juts from the guinea pig's forehead, giving it a unicorn-like appearance. You may have spotted GPs of this type without realizing they require constant haircuts.

These guinea pigs are named for their shiny, lustrous, satin-like hair. the hairs are actually hollow, which makes them slightly reflective and can also alter the color of the guinea pig. A Satin guinea pig in a particular color is likely to look a little different to a non-Satin Self of the same basic colour. Although Satins are often Selfs (known as Solid Satins) they also come in other types such as Satin Abyssinian, Satin Himalayan and Satin Tricolour.

The Satin guinea pig breed is controversial due to inherent health problems. The breed has a tendency for a bone disease known as Osteodystrophy. The symptoms are a stiff, hopping walk, and loss of weight.

Silkie Guinea Pigs are a long-haired breed that requires regular trimming and/or grooming in order to keep it neat and tidy. Silkies have long, lustrous hair that can be several inches long, and they come in a wide variety of colors.

Teddy guinea pigs have very wiry hair. They are ridiculously cute animals with a halo of fluff surrounding them, and this appearance makes them very popular pets. They come in many different colors.

These guinea pigs have curly, long hair. Their coats form sweet little ringlets all over the GP's body, making them look larger than they actually are. Texels come in different color varieties. 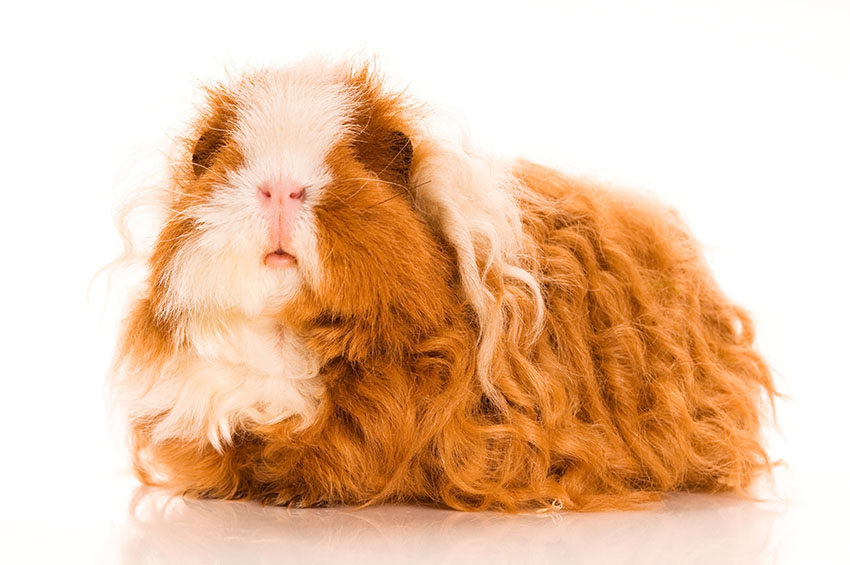 'White Crested' is the name given to any guinea pig that has a small patch of white hair in between the ears resembling a small white crown. It is the GP equivalent of a hair parting, with the fur radiating out from a single point. 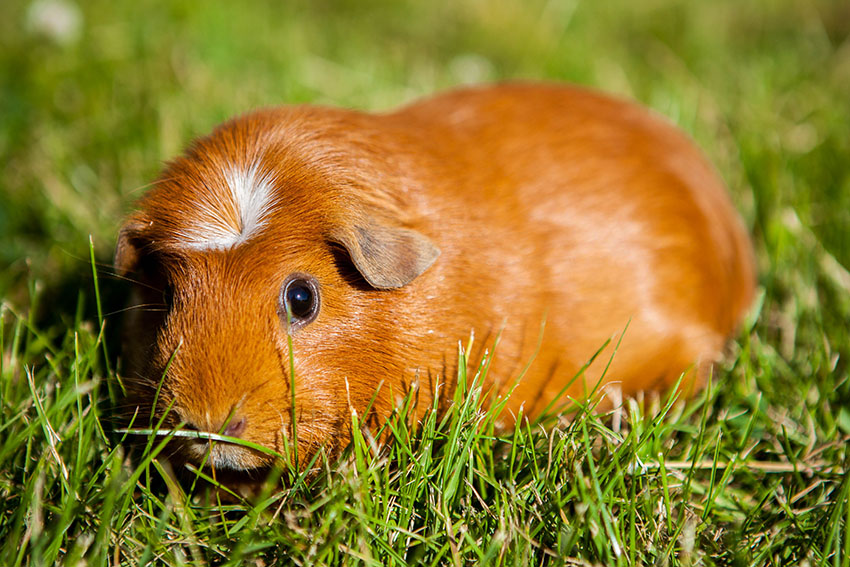 So many partings... white-crested guinea pigs have what look like little crowns on their heads

Guinea pig breeders all over the world are creating new varieties all the time. Some of these will disappear, but over time others will come to be accepted as 'recognized' varieties. Below we’ve listed a few of the newer varieties – the Lunkyara, the Magpie, and the Ridgeback.

i am getting 2 guinea pigs soon and i think i am set on an american guinea pig.