If your parrot has simply escaped from its cage, close the doors and make sure all windows are shut. Closing the drapes will prevent the bird flying into the window and injuring itself.

Keep all other pets away from the room while you recapture the escapee, and remove anything fragile that the bird might knock down as it investigates the room's nooks and crannies. Remove any potentially toxic house plants, foods or liquids. If the parrot is tame, it will be easy to lure him onto your hand. If the excitement of the escape has made the bird nervous, it may not want to perch on your hand; but it will return to the cage soon enough once it's had a look around and ants to return to the comfort of home. 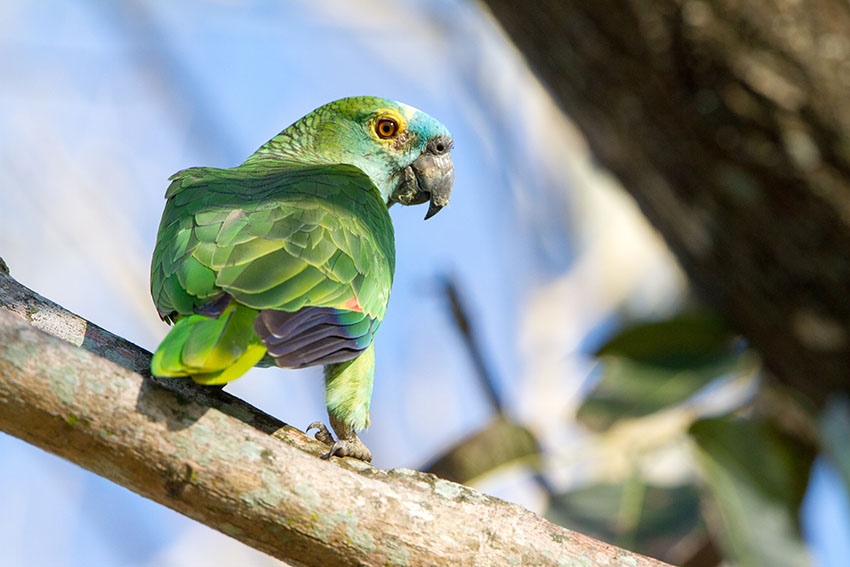 If the parrot has escaped outdoors, it's a much more serious problem. Your chances of recapturing the bird depend on how tame it is, and how content it has been in the aviary or bird house. A happy bird will usually head for home soon after escaping – unless it has flown too far and become lost or exhausted. A tame bird will respond to your familiar voice, so as long as he hasn't flown too far, you’re in with a good chance of calling him home. Most escapees will spend the early part of their freedom close to the aviary. 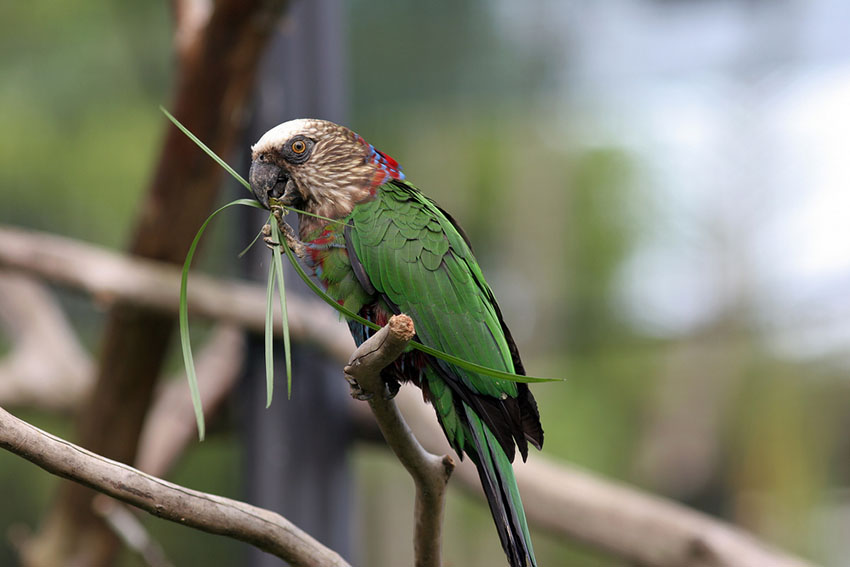 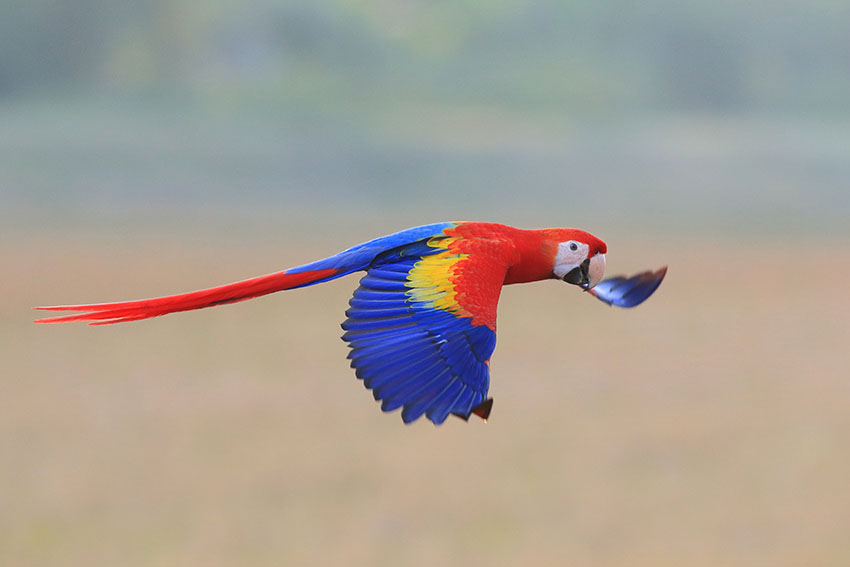 Scarlet Macaw on the wing

A parrot-catching net needs using with care; but sometimes it's the only way of recapturing an elusive and frightened parrot. It’s a handy piece of kit to have around, for when an aviary bird needs isolating or capturing for a visit to the vet. It also comes in handy if the parrot has escaped. 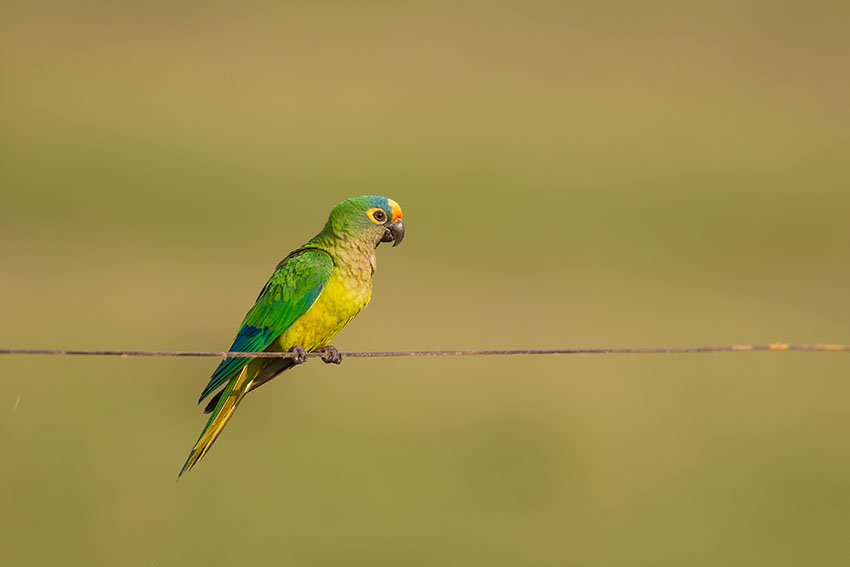 
Bird nets can be bought in online stores, or you can improvise one using a soft towel or pillowcase. The advantage of the net is that it comes on the end of a long stick, so you can catch the parrot while you’re still some distance away from it.

No matter how tame your parrot, and no matter how many times it has been netted, the process will be stressful for the bird, so a net is not something to use routinely – only in emergency situations such as an escape.

My Sun Conure has been gone since April 2nd I really hope he comes back or someone finds him soon ,I don't know how long they can stay out but hes 9 years old and he's used to loud sounds no sighting, every so often I think I hear him, I call for him and he never comes out if it's him. I miss him so bad , cage out poster up, posted on FB and paw boost and parrots 911.

My canary wing flew away Sunday around 11:30am I’m so sad it’s been 2days. She flew in the tree and was scared to get down. I called her name she responded something scared her and she flew through more trees. Shes green and when she spread her wings the colors are yellow and white She’s friendly she talks she say her name (pickle) she say hi what’s up go home pickle and hey pickle. She loves Honey Nut Cheerios Please if anyone spots her please call 856 870 6813. $300 reward???? she just leading how to fly she’s only 1.

i pray our birds are soon back close together with us. for my yellow headed amazon has been 5 days still looking listening left water several locations and food. seen hawks circling 2 days ago. i scared them off havent seen since. walked the area of tall grass didnt see or hear him left a shelter and waster for him still was very hot 95+ sure he tired and went down had flight feathers clipped week before didnt think he could get high up not to mention distance. if could would fly to me or call to have me pick him up and sit and wait. loves qoing w/ on my bicikle rides on my shoulder. something scared him for to fly off ? help help

REWARD!! Grady, LOST African Grey Parrot Grady is mostly grey with a red tail, white mask, and missing chest feathers. If you see him, please call or text 770-344-9000 immediately. Grady bonded with my sister but doesn't typically come to people so please don't chase him. He might come or stay with treats; he especially likes peanuts, almonds, and chicken. Last seen at Webb Gin & Janmar in the Raintree Forest neighborhood (Snellville, GA 30078 in Gwinnett Co.) My sister recently adopted Grady and it took several days for him to be comfortable enough to start talking he'll likely be quiet outside. He's got a lengthy vocabulary (including cusswords) and recent favorites have been Hello, Grady, Pretty Bird, and I love you. He also makes a variety of sounds and whistles, and likes when the calvary charge is whistled (https://www.youtube.com/watch?app=desktop&v=VY58inWev0E) REWARD for any info that leads to Grady's return!! Thank you for your time