Parrots are noisy! The range of sounds they make is astonishing, and most of it will be happy chatter. But make no mistake – sometimes parrots will shout and scream like a kid in a supermarket when Mom and Dad refuse to buy candy! You have to take the rough with the smooth. This section of the Omlet Parrot Guide describes some of the sounds your pet birds will make. 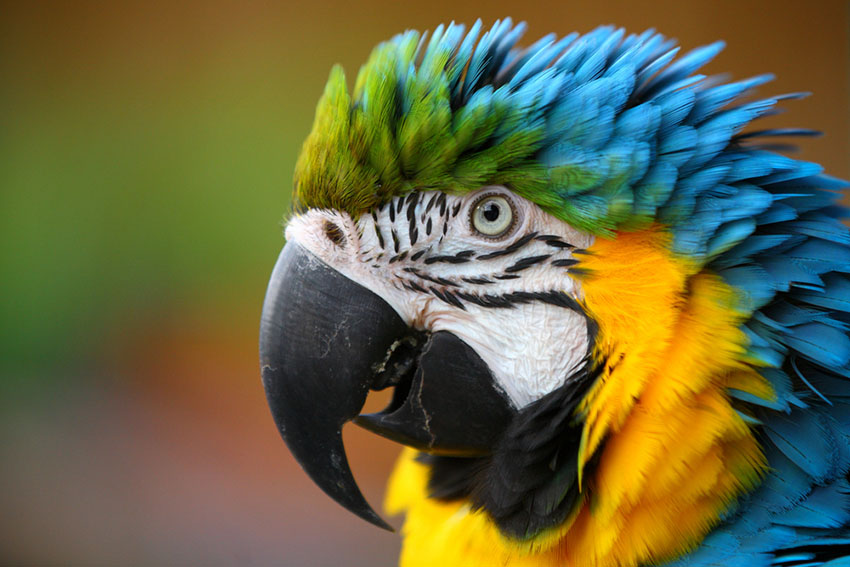 Noisy? Me? Blue and Yellow Macaws have a lot to say!

This is the sound of a chilled and contented parrot. The sound is a cross between grinding teeth and rustling in packet of potato chips, and the birds tend to settle into happy beak crackling in the evening as they settle down after a busy day, or whenever they’re taking time out from the activity of the cage or aviary.

This is very different to the contented beak-grinding described previously. Clicking is the noise made when parrots rattle the upper and lower parts of their beak together in a rapid-fire attack. It’s a threat, made by a bird defending its territory or its place at the feeding station, and sometimes directed at the parrot’s bird or human partner. The sound is accompanied by dilated pupils, which is always a sign of excitement in parrots. The wings and/or feathers may be raised too so that the parrot seems larger.

This is the general background ‘motor-mouth’ sound your parrot makes when he’s happily going about his business. Individual birds have their own repertoire of squawks, whistles and other vocalizations, and will often pick up background noise and human speech to add to the vocabulary. 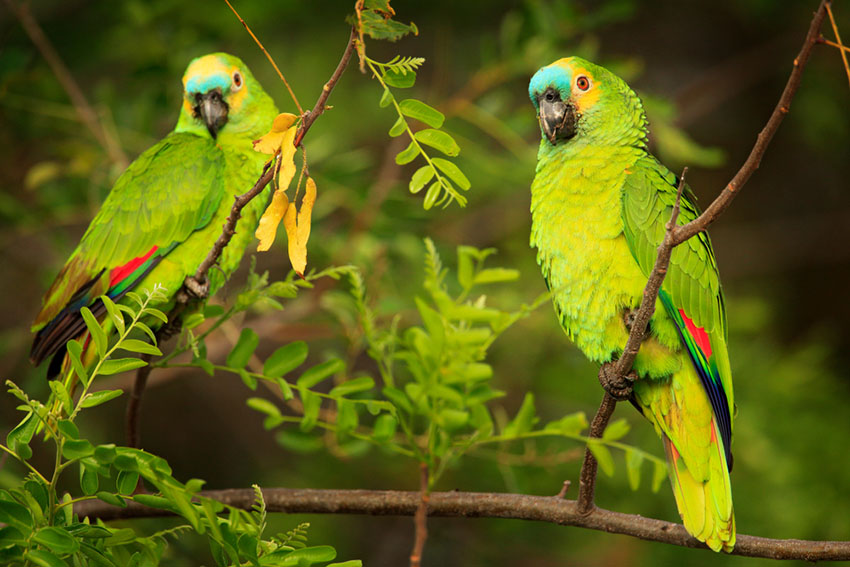 This is another aggressive sound, a warning to keep away or stop doing whatever irritating thing is being done! Larger species have a low, guttural growl; smaller species have a higher, but unmistakably angry, version. Growling means stress, and the angry bird will try to bite anyone who comes too close. The sound is accompanied by raised neck feathers and dilated pupils.

This is pure mimicry, and is particularly popular amongst cockatoos. Parrots soon learn that humans enjoy the sound of laughter, and that becomes an incentive for them to laugh back at us! It matches their sense of humour terrifically – they will often use the sound at inappropriate moments, such as when being scolded, and this ‘breaks the ice’ every time. The birds are very clever and learn to recognize the sound your voice makes before a laugh, and this enables them to ‘pre-empt’ laughter by starting before you do. The effect is hilarious if a joke is being told, as the bird will often laugh as the punchline is delivered!

However, the fun has its limits. If a parrot laughs when it has bitten someone or attacked a cagemate, it may be the result of someone laughing at bad behavior during the training period. So, bad behavior should never be met with laughter – a wicked sense of humor shouldn’t be encouraged, as someone might actually get a nasty bite at some point. 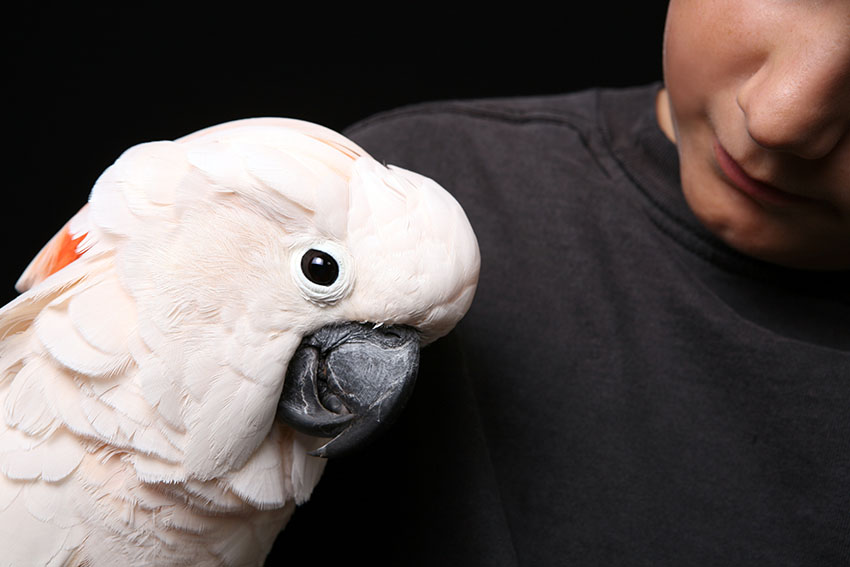 Laughing boy – the Moluccan Cockatoo is a master of comic timing!

Some species are quieter than others, but in general the parrots are a noisy bunch. Silence is usually reserved for sleep or when a bird is tired or bored. Feeding, chewing, and exploring bring moments of quiet too. However, silence can also be a sign of illness – if your bird’s usual noise stops for no obvious reason, give it a good visual health check (see the Parrots and Disease section of this guide).

Purring is a sound of happiness in parrots, just as it is in cats. It is lower and quieter than the angry growl (again, parallel to a cat purr). If you’re struggling to tell your parrot’s growl from its purr, body language gives you the clues. Purring birds are chilled out, with no raised wings or feathers and no dilated pupils. 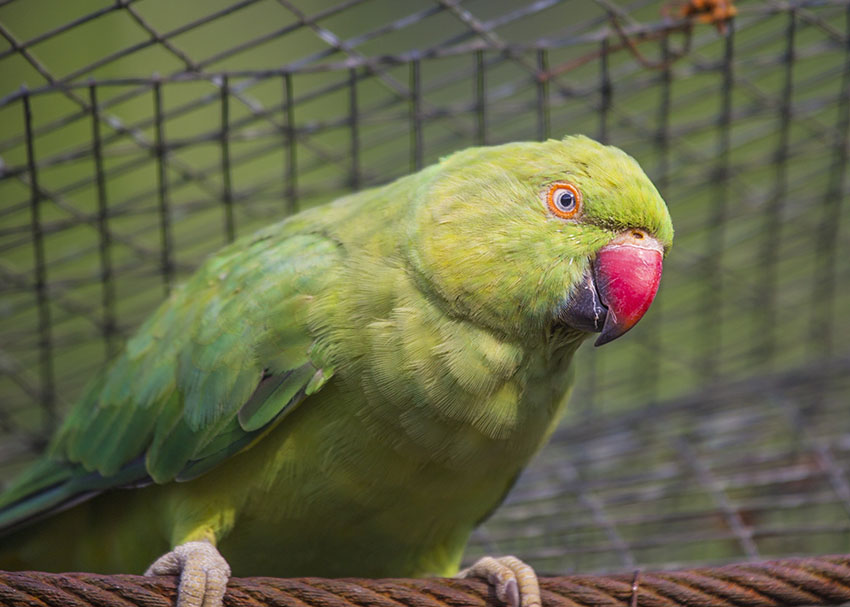 As in many animals, a scream is an alarm call, a warning for the benefit of all other parrots within earshot (and in the wild that can mean several square miles!) It is usually caused by something the parrot has spotted, and which looks dangerous. It might be a bird of prey passing overhead or it may be the sight of a hated household appliance such as a vacuum cleaner. New sights or sounds often inspire shrieks too. African Greys have a scream that sounds more like a very loud growl. This means the same thing.

Parrots are great singers, and their songs are an ever-changing mixture of the bird’s favorite noises, from gurgles and trills to whistles and squawks. Some species are more musical than others, and some are the bird version of tone-deaf. This will not stop them joining in with background music or conversation, and some (the macaws usually) seem to take wicked pleasure in singing off-key! 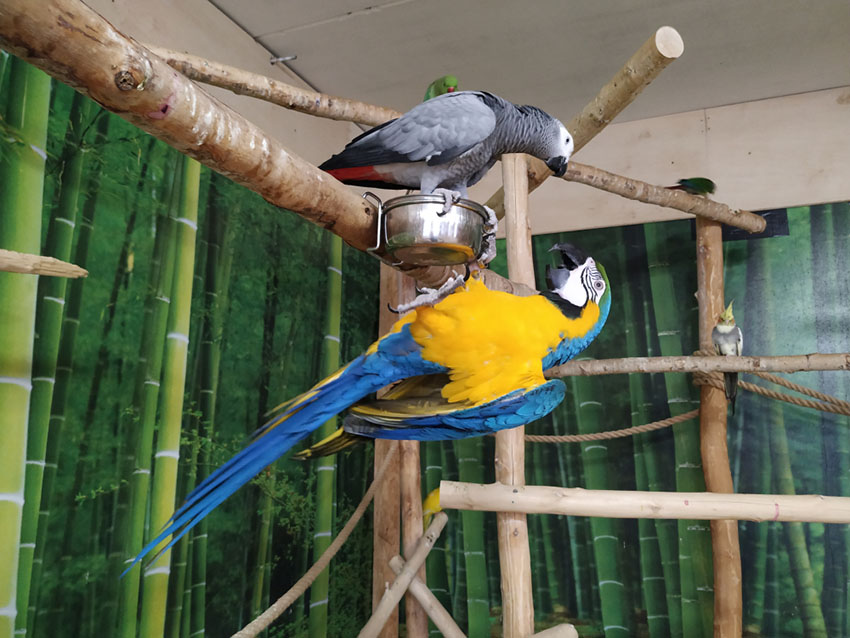 Sweet song or tuneless chorus? This African Grey and Blue and Yellow Macaw love to “sing”.

This is nothing other than annoying, for you and for all the other humans and animals in the house! It is often a sign of boredom or the early stages of anger. The best way to end the squawking is to offer a new treat or toy. Don’t offer lots of attention though, or the parrot will always squawk for attention, and that’s something no one wants! Shout at the birds will not help either – it will put everyone on edge and will probably lead to even more squawking.

This is an add-on to the ‘chatter’ described above. If a parrot has learned human words and sounds, it will use them when relaxed and chatty or inquisitive. Parrots soon come to realize that humans like to hear these sounds, and will often use a chosen word, phrase or whistle to get your attention. (For more info about talking parrots, see the Teaching Parrots to Talk section of this guide). 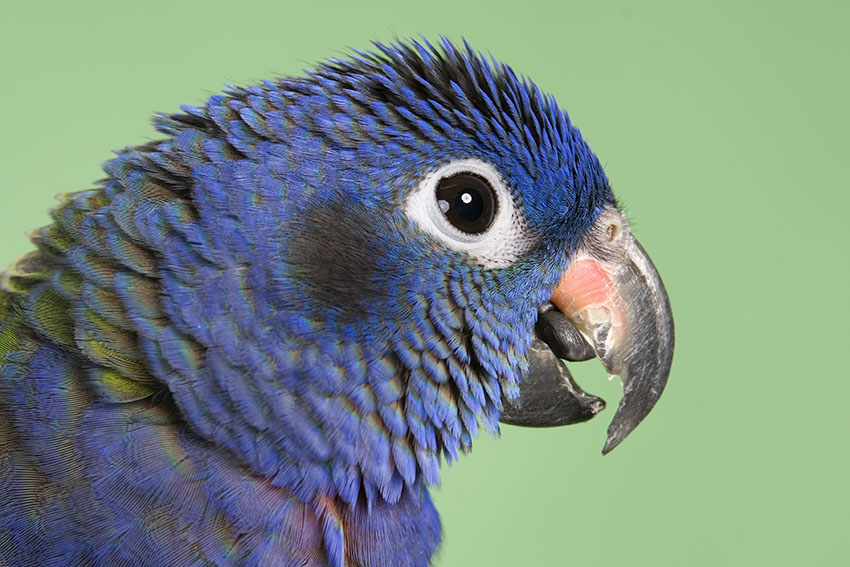 This sound is very similar to that of a human clicking their on the roof of the mouth. It’s a happy sound, and is used when the bird is seeking attention. Not all parrots use the sound, and you’ll hear it most often with cockatoos and cockatiels.

Another happy sound – parrots never whistle when angry. The sound is used to get someone’s attention. Cockatiels are great whistlers, and Cockatoos and African Greys often have a favorite whistle (sometimes learned from wolf-whistling humans). The whistle often becomes a form of comment, and is used if someone enters or leaves or room, or if a car passes by the window, for example.

I have a Gordon cockatoo who tends to be silent. Sometimes she’ll squeak or make an alarm noise, but I’d say 95% of her time she’s silent. I’ll try and entertain her, play music, or encourage her to make noise but she doesn’t do any of that (besides beak grinding which she does do often). The vet says she’s not sick but I’m concerned that she doesn’t make a lot of noise.

What does it mean when an Alexandrian parrot keeps rubbing beek on cage bars.

Sunday the 22nd of September the wife and I stumbled upon on a 39 year old Turquoise fronted Amazon that was surrendered of elder owners who could not take care of him anymore. So the wife was talking to him George and he was pretty laid back. Well I gave George a new home that day. George and I bonded very quickly and now I have a new friend that is just laid back and wants me every minute of the day. Which I think is cool so I go outside he goes with me I sit down to watch tv he is with me. But tonight we were watching YouTube videos on blue fronted parrots and George was sitting in my lap so I started rubbing his head and he started purring and cooing like we have been best friends for the last 39 years. But the previous owners let George get way over weight and I am looking for help getting him on a diet.

Thanks to share your knowledge with us and increasing ours