Breeders who keep Type Canaries are interested in form, shape and size, rather than color or song. Over the past 200 years or so, many different varieties have been developed. These are the most common and/or most popular ones; but this list is in no way a comprehensive one, as there are almost endless variations on the theme.

This variety, first bred in the late 17th century, was the first of the canary types to be bred specifically for looks rather than song. And a particularly odd look at that, these little birds are round-shouldered and have a vulture-like stoop. The original Belgium Canaries were around 155mm long, but the modern variation has shed a few millimetres. Birds of this type are uncommon - breeding lapsed during the first world war, during which the breeders most likely had other things on their minds. These birds were used to develop more popular breeds later on, such as the Yorkshire, and other regional variants like the Muenchener (from Munich), the Rheinlaender (from Hilden, Germany), and the Japanese Hoso.

These birds have very distinctive heads, the feathers giving the impression of a flat top with a protruding forehead. These birds also have a very erect stance, making them look even taller than their 160mm (6 inch0 length. The variety hails form Bern, Switzerland.

This variation gets its name from the Border region between England and Scotland, where it originally was bred in the early 19th century. Prior to 1890, the Border was known as the Wee Gem. Despite being originally given this name, it has now become one of the larger canaries at 146mm. 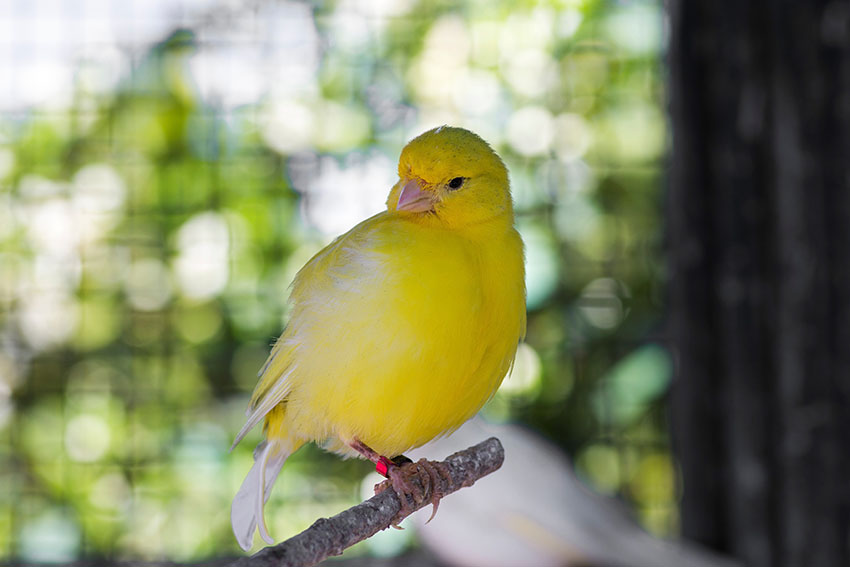 
Most Borders are yellow, but they can be found in a whole array of color combinations. The most defining features of the bird are the size, stance, the silky smooth coat of feathers they rock and a plump, rounded profile which bares some resemblance to an egg.

This variation is an American speciality. It was first bred in the 1920’s from a combination of Harz, Yorkshire, Lancashire, Gloster, and Norwich canaries. It’s named after the city in Ohio, rather than the man who sailed the ocean blue back in 1492. It measures in at around 150mm, and is one of the “stocky” varieties, with a short beak, a rounded head and chest and a thick neck. They also have a crest.

The Crested was bred in an attempt to create the ultimate crested bird by combining Norwich and Lancashire cresteds. As the name suggests, this type sport a crest upon their little heads. This bird is not as popular as the Gloster, and consequently is a lot rarer. It’s also a very large one, reaching around 170mm (6.7 inces) in size. 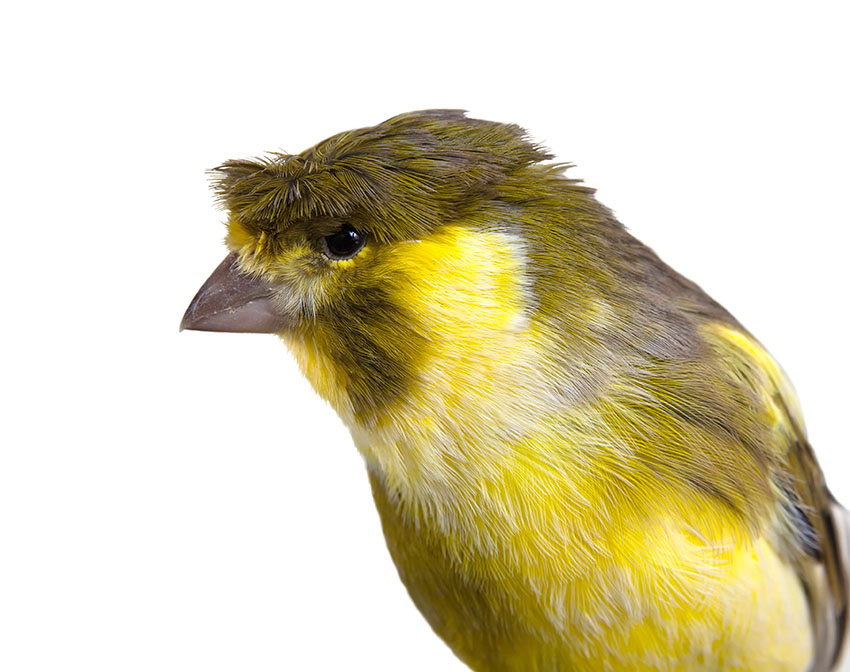 This is just a miniature version of the Border Canary. It was originally bred for cuteness in the mid 20th century. As the name states, it has its origins in Fife, Scotland. At only 114mm (4½ inches), it is the smallest common canary variety.

These birds have mutated feathers which make them look as if they are fresh out of a hurricane. The effect is either pretty or messy, depending on your viewpoint. The bird’s feathers curl inwards, upwards and outwards in various places, rather than straight down from head to tail. The areas affected by this mutation are the back, chest and flanks, with feather formations referred to as a mantle, jabot/craw and fins, respectively

The birds themselves are derived from Dutch Canaries in the 1800’s. There are many different types of frilled Canary around today, the most popular being the Parisian (also known as the Parisian Frill), a bit of a monster racking in at 210 (8.25 inches), which has been a feature at Canary shows since the 1850’s+ 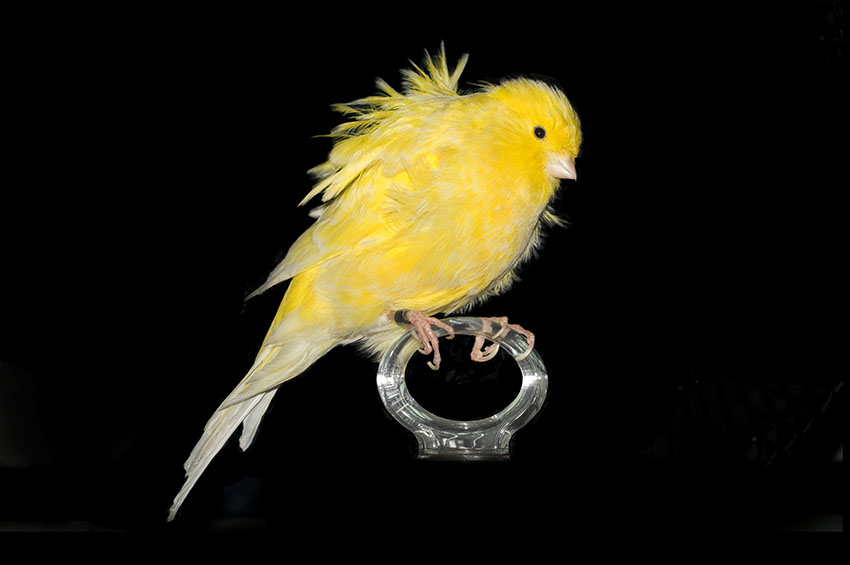 
The Northern and Southern Dutch Frill Canaries are also rather popular, measuring 4cm less than the Parisian. Rather confusingly, these birds weren’t originally bred in the Netherlands, but rather in Belgium and France respectively. They were originally bred from the hunchbacked Belgium variety. They are the genetic forebears of the vulture-like stoop seen in many frilled canary varieties today. This odd look is most prominent in the Humpback Frill Canary. Other misshapen varieties include the gibber Italicus from southern Italy; the Makige Frill from Japan; the Melado Tenerife; the Spanish Giboso; and the Swiss Frill.

In total there are around 20 recognised Frilled Canary types. Other popular variants include the Northern Frilled from France, the Paduan from Padua, Italy; the rather massive Italian Gigant Frill (also known as the Arricciato Gigante Italiano Canary), which has a minimum length of 8 inches!.

The Gloster, which was originally spelled Gloucester but this proved confusing for breeders outside of England, was first bred in Gloucestershire, England. This variety was first bred in the late 19th century and is now a very popular show bird. The popularity of this particular bird spiked in the mid 1960’s, as the arrangement of feathers on its head made it look like a little avian Beatle.

This bird is short and squat, measuring in at only 4.75 inches long. It is a combination of the Herz, Border and Crested Canaries. The feather “wig” which the birds are known for is not actually present in all birds - the ones that do have it are called Coronas, and those without it are called Consorts, or plainheads. Oddly, Corona’s can’t be bred together, this is due to the complexities of genetics and inbreeding. The chicks never survive. 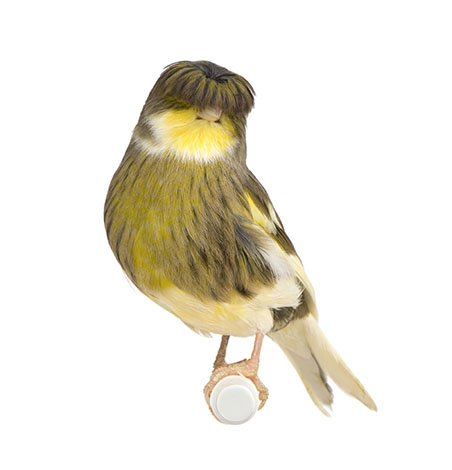 These birds are reminiscent of little Sergeant Majors, having a straight backed, round-chested stance. These birds also come in crested and non-crested varieties, and measure around 6.25 inches from tail to beak.

Ireland’s main contribution to the melting pot that is canary variations are these small, erect birds. This variation measures in at 5 inches from beak to tail and lacks the plumpness seen in most other smaller varieties.

This is a very new addition to the Canary family, only being developed in the last 10 years. It’s a bird with dilute or pastel colors and is the product of a dominant gene - i.e. a Jaspe bird bred with another Jaspe bird will always produce a Jaspe. The bird is a product of crossbreeding with three species of wild siskin, a;lthough the breed is now self-perpetuating without the need for hybridisation.

Also known as the Manchester Fancy or the Manchester Coppy, these birds are tall, thin and crested and can measure up to a huge 9 inches. They were developed in the early 19th century and are often used to add size to subsequent varieties.

Despite first being bred sometime in the 17th century, these bird’s popularity took off at the end of the 17th century after French Protestant Huguenots fled from persecution in their home country, taking their pet Lizard Canaries with them. The variety came close to extinction after the Second World War, when a combination of disease and a rather pre-occupied Canary-fancying community reduced specimens to a few dozen. After the war breeders - and subsequently the Lizards - rallied and made a comeback. To this day it remains one of the most popular types of canary. Its song is amongst the least impressive of its tribe; but, again, that’s not the reason why it was bred. 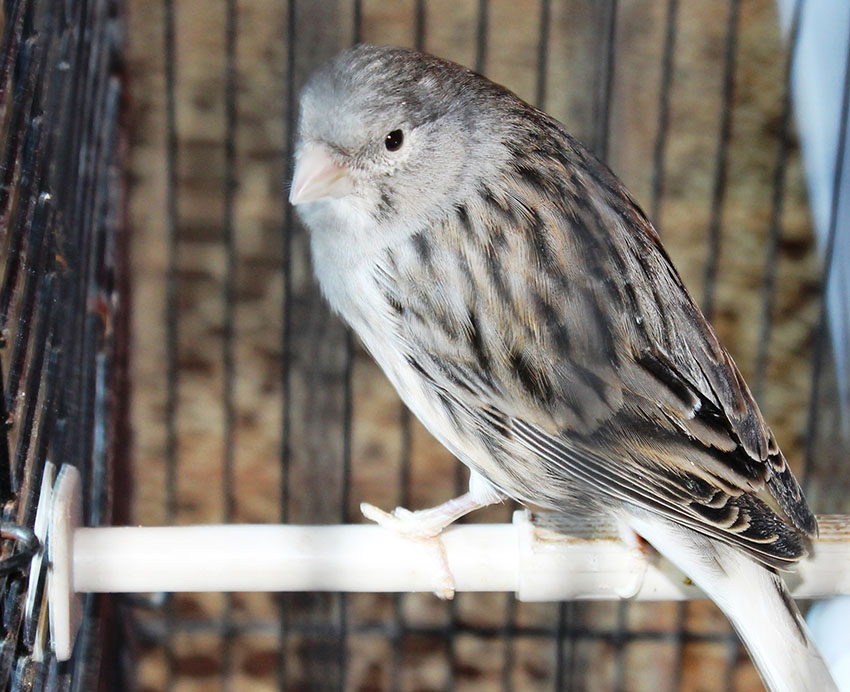 
The name is derived from the black crescent shapes on the bird’s back and breast, suggesting the scaly coat of a reptile. The effect is very eye-catching, and is referred to as spangling and rowing (on the back and breast respectively). Lizards also sport a circular mat of thicker-than-usual feathers on their heads, giving of the appearance of a cap. The scaly pattern gets less pronounced after the birds first moult and gradually disappears as the Canary gets older. This means that show winners are always young birds pre-first-moult.

These birds are the original “mop-tops” and combined with crested Lancashires to produce the Crested, which in turn were thrown into the gene pool of the aforementioned Gloster. The bird was brought over to east Anglia by Flemish immigrants in the early 18th century. These birds are larger than average,with fluffy, bulky head feathers, even when the cap is absent

Unlike the others, this bird is a genuine hybrid. Being a cross between a yellow Canary and a red siskin (Carduelis cucullata). The hue can range anywhere from pinky-oranges to deeper shades of red, and the bird is often combined with other types of canary to introduce red coloration to other variants. Red factor birds require a diet rich in beta-carotene to help maintain their color when they are moulting and sprouting new feathers. 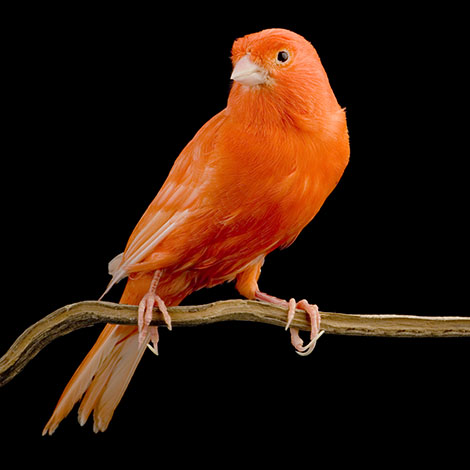 This particular type was developed from Belgium canaries in the early 19th century, with a focus on the hunch-backed posture. Glasgow and central lowland Scotland were the original breeding grounds for this variety, hence the bird’s earlier name, the “Glasgow Don”. 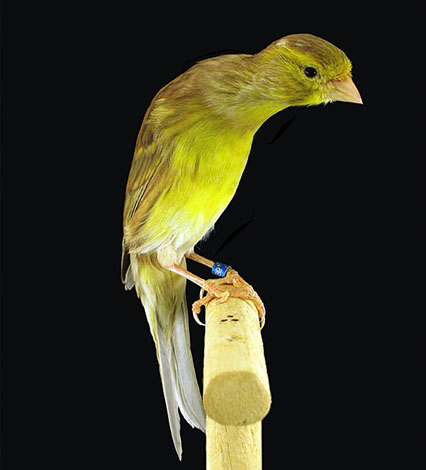 
The thin, bent back posture of the bird has also lent it the nickname The “Bird o’Circle. It is certainly a peculiar little bird, asa it has been bred to come as close as physically possible to a semi-circle in profile (or a quarter-circle, to be more accurate), from the tip of its beak to the end.

This is another bird that was bred for a slender length and upright stance (sitting at a žé degrees angle to the perch). It’s also one of the larger variants, measuring in at 6.7 inches, with a noticeable long, narrow tail with a forked tip. It was first bred in the Castelo and Valencia regions of Spain.

This bird was first bred as a small songster in 19th century Spain, despite this it isn’t counted as a “Song Canary” in bird shows. The bird is small, only coming in at 4.5 inches, with a small build and small head.

This is another more recent bird, first bred in the 1980’s in Staffordshire. It was developed from a successful attempt to produce a small-crested bird with a red pigment. This later entailed crossing Gloster Canaries with red factor birds (see above).

An even newer variation,this type of bird became an accepted variation on the diverse canary theme in the mid-2000’s. It’s a smaller bird, only measuring around 4.5 inches with an egg-shaped body, a yellow-ivory coloration and a crest.

This variation is possibly one of the most well-known types of Canary around today. A larger-sized bird, coming in at 6 inches, the Yorkshire has a no-neck look married to a very upright stance. The peculiar look of this bird earned it the nickname “The Guardsman”. It is the second biggest (i.e. longest) commonly available Canary type. It was first isolated as a variety in the mid 1800s in Bradford, England, and was developed to perfection in the 1930’s. It was a case of inter-county breeder rivalry, with each breeder trying to improve on the existing Lancashire variety by making it constantly thinner and sleeker. 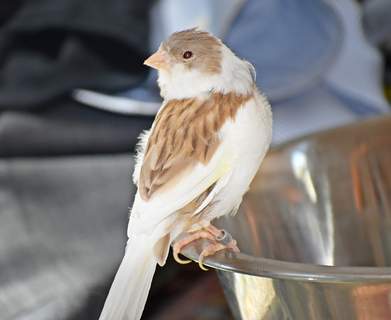 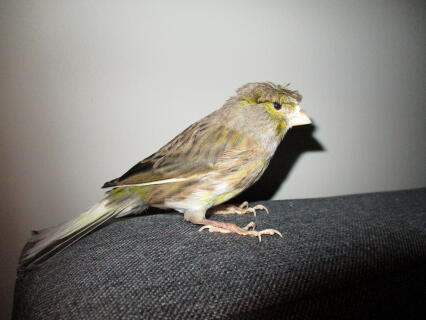 We have a red factor canary that, at 6 1/2 years has developed mutated feathers like a frilled canary on the breast and upper wing. The feathers never form beyond a small curled "'fist". Is this a result of aging or a dietary deficiency? I'd appreciate any insights you might have. We were feeding colored cornbread but have ceased this in the past year when the feathers showed a misshaped appearance. Thank you.

Why do some baby canaries take longer to develop ? 2 out of 3 have left nest but the 3rd seems to be developing very slowly.

Very interesting site giving lots of useful information regarding the little bird of many colours, size etc., etc., A beautiful little bird that gives, brings so much pleasure to a home. No home should be without one if you appreciate and have a love of nature. 10/10 for this information. Thank you!