The first documented human/finch relationship goes way back to the 1360s, when pet Java Sparrows were kept by China’s first Ming dynasty. The west was slightly slower to join in with the love for finches, but around five hundred years ago the first canaries were brought to Europe by Spanish sailors; and over the course of the last 100 years these little canaries have been joined by many other pet finches, notably the Zebra Finch.

The Canary is the true pioneer amongst modern cage-birds. Originally a rather dull looking greenish-yellow, this little bird sang it’s way into the heart of European towns and villages in the 16th and 17th centuries. Other cage birds came and went with the fashions of the times, but our love for the Canary has never waned. 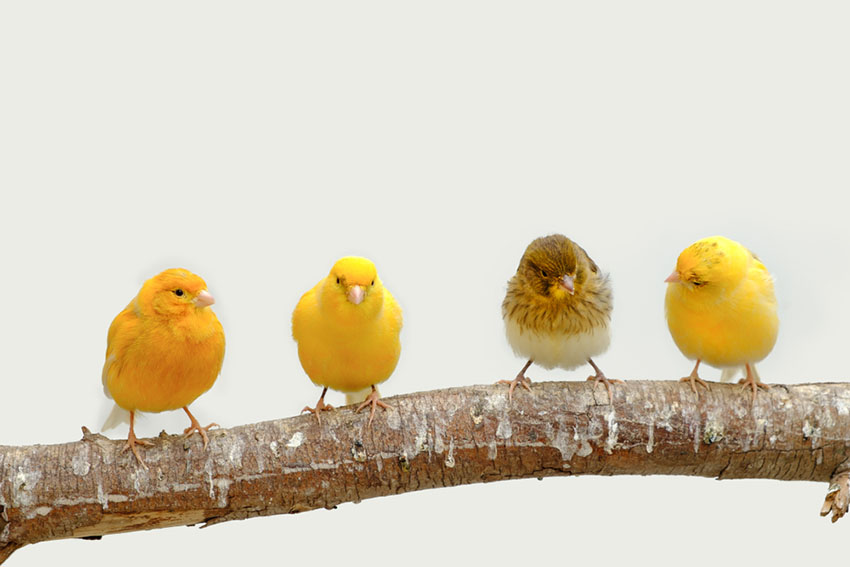 
Funnily enough, the kickstart for the arrival of other popular pet finch species was given not by a finch, but by a small australian parrot - the Budgerigar. Imports of pet budgerigars from Australia began in the mid-19th century, and bird importers were soon to start bringing over some of the budgerigars fellow avian cousins, most notably another small parrot, the cockatiel, but also the Zebra Finch, Gouldian Finch and Double-barred Finch.

Other major players in the finch pet market include the Bengalese Finch and Java Sparrow (which has been kept as a pet in eastern countries for many centuries). As their names suggest, these are not from Australia; but all five of these birds are members of the same family - the Estrildid finches. You will find many other pet finches available for purchase, but these six - the Canary plus the five Estrildid finches - are the ones from which the present popularity of the finch as a pet bird has grown.

How Much do Finches and Canaries Cost?

The prices of pet finches vary from place to place. A standard canary will usually set you back around $12, but this price tag can reach heights of up to $250 for a rare variety. Zebra and Bengalese finches are generally in the $5-35 price range. Some of the more unusual species can fetch up to $200.

How Long do Pet Finches Live?

In captivity, a healthy canary will live around 8-12 years, although birds as old as 15 are not uncommon. Zebra finches will usually live for around 8 years, occasionlly longer, and most other pet finches have similar lifespans. Speak to the breeder or an employee form the pet store you are buying your bird form to get a more accurate estimate on how long your bird will live.

I have 2 love birds and an Amarillo but have long wanted finches. I have acquired a pair of heathy and lively Australian Zebra finches and your information sheets have been invaluable - thank you so much

Please can you help me by telling me a good bush to plant in my bird Avery .thanks Mike