Canary courtship, pairing and nesting will generally follow a very similar pattern to the stages outlined above, though there are one or two notable differences. Most importantly, if your birds are indoors, the cock and hen will need to be kept in two seperate cages that are close to one another. If the two birds are thrown into the same cage without any ceremony, they will fight. Birds in aviaries are a different matter, as they will have the space to avoid or woo each other as necessary.

If you want to pair your canaries up in the hope of them producing some chicks, you should start the process at the end of March by putting their cages within shouting distance of one another. Move the cages a little bit closer to one another every two days or so until, a couple of weeks later, they’re side by side. At this point another option is to move them into either side of a specialist Canary breeding cage, a custom-made construction with a divider section down the middle. 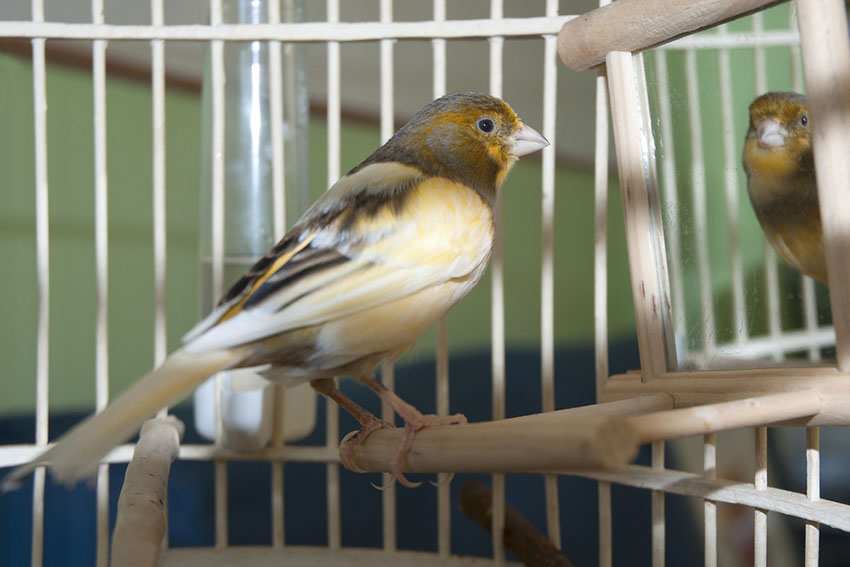 Canaries take time to get used to each other


The birds can still communicate with one another even with the presence of cage bars between them. You will soon notice if there’s any aggression between the two. A compatible pair will sing vigorously, hop around excitedly and make gentle beak contact. The cock will then try to feed the hen, this is a sure sign of compatibility. The hen will encourage this feeding by making chirping noises. She will also make symbolic nesting gestures by gathering the materials you should’ve conveniently placed by the side of her cage. Ripping up paper shreds with gusto. A hen may also sit in her food tray, rearranging the food around her as if it was nesting material.

If these signs of compatibility are taking places, the cage divide can eventually be removed. If you’re not quite sure that they’re ready for the big leap, keep the two separated for a little while longer.

The environment your birds are in will play a big role in Canary mating behaviour. The temperature will have to be around 70 degrees, and daylight will need to last for more than 12 hours. If this isn’t the case, no amount of cage manipulation will get them in the right mood. Some breeders opt to use artificial light to get them in the mood.

Canaries will usually lay four to six eggs per clutch and the hen will do all of the incubating, but both parents will take part in feeding. The cock bird will also feed his mate while she’s sitting on the nest.

After six months of living together, the young Canaries will all have to be separated. These birds are not very sociable and will become stressed living in an aviary unless there is plenty of room.