The hen and cock will both feed the chicks, regurgitating food for them. Feeding doesn’t start until a chick is two days old, which is the point when the nutrition provided by the yolk sac runs out. Fledglings’ eyes only open after six days; and after the youngest of them has reached ten days old, the hen will incubate at night only, as the chicks will be robust enough to survive in the nest without being sat on during the day. At this point they will start sprouting their first adult pin feathers, too. The chicks will finally fledge between 14 and 20 days (depending on the species), but they will still be reliant on their parents for food at this point. 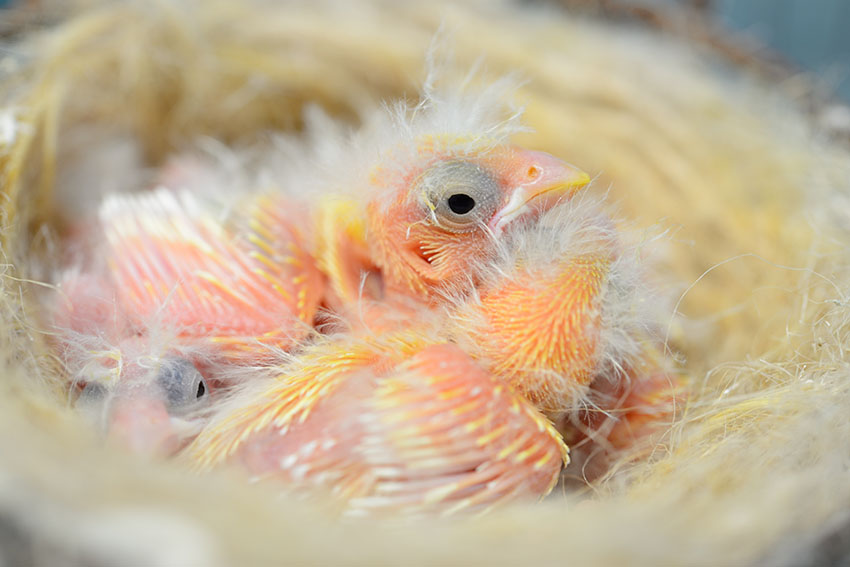 Depending on the species, weaning (independence from the parent birds) occurs between four and six weeks. The chicks will beg for food as they perch, and eventually their parents will stop answering their calls. The young will soon learn where the food is by watching their cage mates, and their begging behaviour will end. If the chicks are particularly slow in getting the message, their parents will simply chase them away. An adult cock bird, in particular, will soon come to view his own chicks as potential rivals.

Once the chicks are feeding and drinking without any parental guidance, the young birds will need to be placed in a separate cage, away from their parents. In larger aviary setups, they will all manage to find their own space without you intervening. 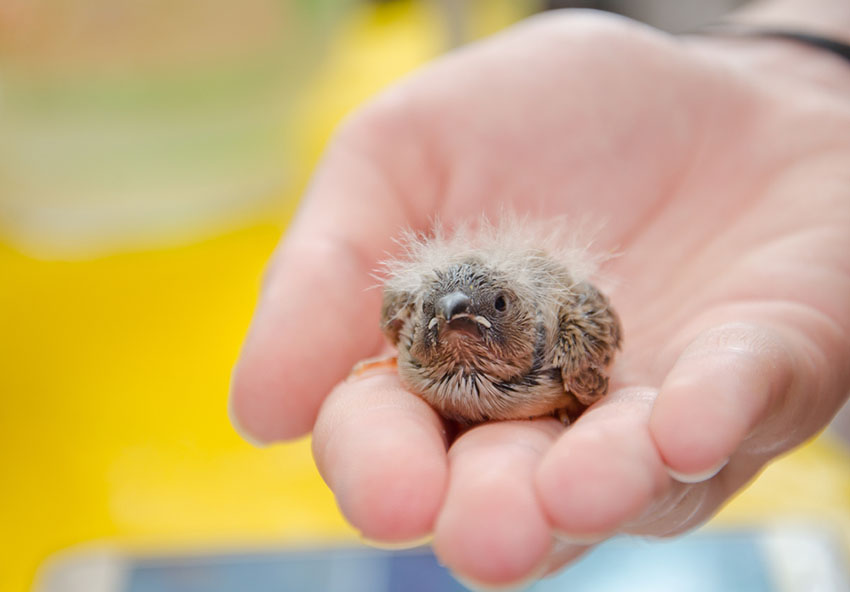 If left to their own devices, your pet finches will often try to breed several times a year. Because of how physically taxing the acts of egg-laying and chick rearing is, especially for the hen, no pair should be laying eggs more than three times a year. Two clutches is plenty.

I can not see inside the zebra finch hut but both male and female been taking turns sitting on the eggs it has been about 13 days and I can not tell if they hatch, how will I know if they hatche

Hi! I just had my first batch of beautiful babies. Got 3 but one is younger and the older 2 just left the nest a couple of days and the 3rd. Has tried but found at gotten of cage as its still too little. Very concerned about the little one. I have put it back 2 times now :( is there somethng I can do to help the little one ??

Does the Chaffinch regurgitate food for its chicks? we feed meal worms to the NZ North Island Tomtit, and a pair of Chaffinchs also 'geting in on the act', eating 5 - 6 meal worms each! Quite impressive.

The father of my all white baby finch keeps chasing pecking not allowing her to perch now the mother’s is showing signs of bullying but at the same time they feed her along with the two dark in colour finches I find it quite sad as they have only left the nest about a two weeks ago or less the mother and father continue to mate I now have two eggs in food bowl as I removed the nest box for this reason as they have only just had this litter of chicks I just need to know why they are being so rotten to this one little chick she can’t do wright for doing wrong it’s sad to watch as they are not ready to be separated although they do try the seed and water but still ask to be fed please help thankyou.

Our zebra finches finally hatched thier first babies today do we need to give them special food or just stick with dead meal worms and seed, lettuce any advice would be fantastic as everyone has conflicting comments. Cheers