Breeding gerbils isn't a decision to be taken lightly. If you don't want your pets to breed, the answer is simple - never keep a male and female together.

If you do decide to breed them, it's important to be prepared, to be well-read on the subject, and to consider what you are going to do with the baby gerbils after weaning. After all, a pair of gerbils is able to produce around 50 young over their reproductive lifetime. It is very easy to become overrun with baby gerbils needing homes. 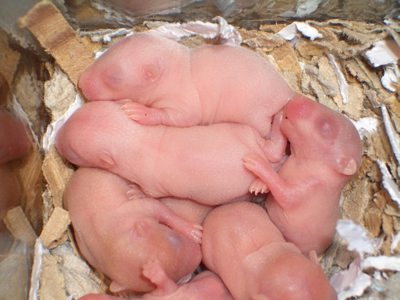 
Gerbils become sexually mature at four months or so. A younger female may become sexually mature a little early if paired with an older male. Females tend to come into season in the early evening, and mating process is a noisy and prolonged affair with much drumming of feet, chasing around, and the male repeatedly mating with the female.

Female gerbils give birth at 21 – 25 days. They hide their pregnancies well, and there is often no obvious sign that she is pregnant until the last minute, when she begins nesting. In the last two or three days her belly may appear slightly swollen too. The female's behavior may change, and the male will not usually be welcome in the nest in the day or so before the birth.

Gerbil moms need no assistance giving birth, and the first sign you'll have of the newborn pups will be their squeaking sound.

Gerbils will commonly mate again on the same day they give birth. While she is nursing her pups, the new embryos will not be implanted in the womb immediately, so the second litter will not usually appear until 28 to 43 days after the birth of the earlier litter. Keeping the male away from the action will prevent this from happening!

A gerbil litter normally consists of five or six young, but can be anything from three to nine. In those rare cases where there are only one or two babies, the mother's instincts may not kick in and the pups may die after a day or two. If you own another breeding pair, they may foster the abandoned babies, and this can even be done with foster-moms of different species such as rats and mice.

You may notice that the mother often appears to mistreat the pups. She will move them around a lot, split them into two groups, kick them around whilst digging or reshaping the nest. Don't worry, this is all perfectly normal behavior and the pups are very rarely harmed.

Every now and again mom will round up her pups and feed them. If the male is still hanging around, he will help raise the pups, keeping them warm and clean, and sometimes rounding them up and returning them to the nest if they start trying to escape and explore!

Gerbil babies are known as pups. They are born pink and hairless, with their eyes and ears are sealed. They are pretty helpless at this point, and all they can do is squeak, wriggle, and suckle. They are unable to regulate their own temperature and are completely dependent on mom - or both parents, if both are present - for everything.

The pups eyes open on day 17 or 18, at which point they will look like small gerbils rather than pink maggots with legs! They will have developed their teeth and will be trying them out by chewing on cardboard, food, and anything else they can find. At this stage they are still completely dependent on the mother's milk, though.

Weaning takes place at about four weeks. At this age the pups will already be regularly eating solid food, particularly small seeds, and will be drinking from the water bottle.

To ensure your baby gerbils complete their social and emotional development they should not be separated from their parents until they are at least six weeks old, by which time they are fully independent. They can be kept with the parents until eight weeks old.

You do not need to worry about the babies breeding as they are unable to do so before eight weeks. In the wild, the youngsters would be encouraged to leave the burrow in search of territory of their own, unfortunately they cannot do this in captivity, so it is important to remove the youngsters from their parents before any conflict can occur.

Hello, so I have a gerbil who I know is inbreeded and she is super skinny, I have her sister and 3 brothers and they are just fine. She does eat and drink - she is always on her wheel or sleeping and sometimes chew, should I be worried?

Can gerbils mate and the female not get pregnant?