Parrots share the same basic anatomy, in spite of the size differences between species. Their distinguishing features are their relatively high intelligence, in bird terms; their large, downward-curving beaks; and their feet. Two of their toes face forwards, and two face backwards (a feature shared with woodpeckers and cuckoos). The scientific term for this is zygodactyl. 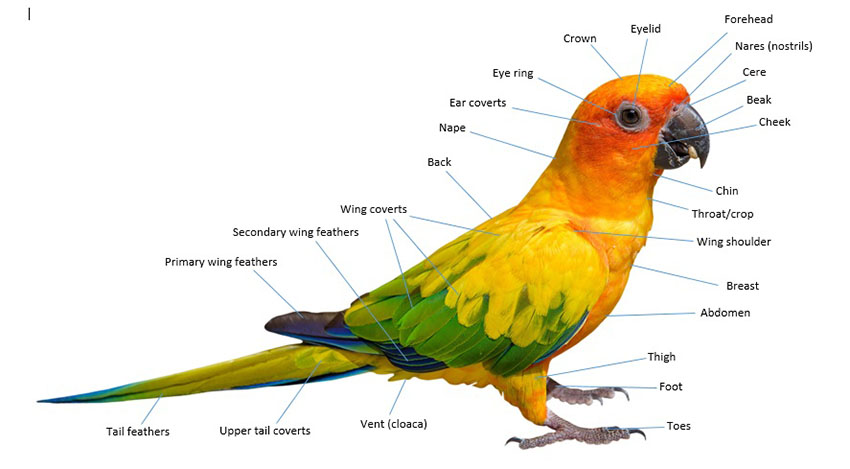 The fossil record has revealed parrot-like birds from around 40 million years ago, in what is now northern Europe and North America (although there are no surviving native parrot species in Europe today: the flocks there are all the descendants of escapees). All the modern families of parrot appeared between 7 and 1.5 million years ago, consistently sticking to the warmer areas of the globe. This is why they abandoned northern America and Europe, as continental drift sent those landmasses to colder northern climes.

The one true ‘northerner’ of the modern parrots was the Carolina Parakeet (Conuropsis carolinensis). In one of the most famous examples of human brutality to animals, this species, once numbering in millions, was gunned to extinction by European settlers. The last sighting of a wild Carolina Parakeet was in 1904, and the last member of the species died in Cincinnati Zoo in 1918.

There are over 380 known species of parrot still alive today; but the number is actually rising.The El Oro Parakeet (Pyrrhura orcesi) of El Oro, Ecuador, was first identified in 1988; and the Camiguin Hanging Parrot (Loriculus camiguinensis) of the Philippines was found to be a distinct species in 2006 (having previously been listed as a subspecies of the Philippine Hanging Parrot (Loriculus philippensis)).

To study about parrot biology