All parrots are prone to internal or external parasites, especially ones kept in an outdoor aviary. Ticks can hide amongst feathers, and fleas, lice, and red mites - the commonest type of parasite - are small enough to avoid notice until the bird has started to show symptoms such as feather loss. With internal parasites, the accompanying symptoms are your only clue. 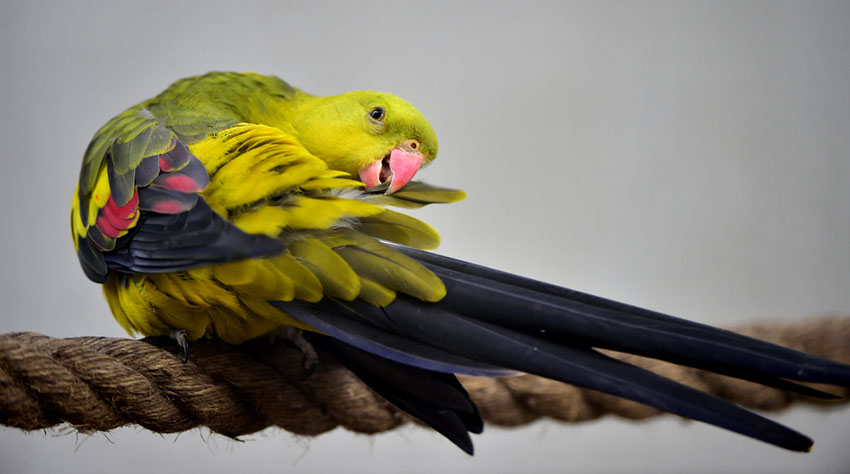 This Regent’s parrot looks healthy – but parasites might be lurking!

An infestation of red mites (Dermanyssus gallinae) causes birds great discomfort. The blood-sucking creatures are difficult to spot with the naked eye, at just 1mm max. They are also nocturnal, attacking your pets at night. If unchecked the mites will soon reach plague proportions, and the resulting blood loss may weaken your parrot’s immune system and lead to secondary infections.

One way of verifying the presence of the tiny mites is to put double-sided sticky tape in the nooks, crannies and corners of the aviary where the creatures gather in the daytime. The mites will get stuck on its surface. Once you know they’re there, you need to clean everything in the cage thoroughly with hot water and a scrubbing brush, and keep checking and cleaning over the next few days until they’ve gone.

Scaly face is caused by the tiny skin-burrowing mite Knemidokoptes pilae. It mainly affects the bird’s cere and beak, but can also cause problems in the legs and the vent area. The first sign of the problem will be prolonged scratching and rubbing. A crusty growth will eventually appear on the cere, and the beak will become misshapen as the mites burrow inside. Some facial feathers may be lost. If untreated, the affected body parts will drop off, leading to severe handicap.

You need to intervene long before the problem reaches this extreme stage. A visit to the vet is necessary, where the bird will be prescribed a suitable swab for treating the infestation. 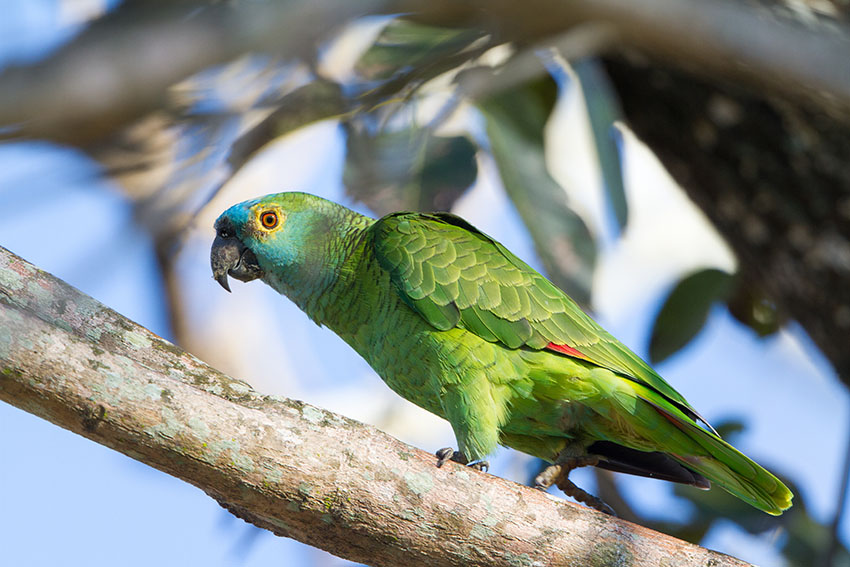 This is caused by Knemidokoptes mutans, a cousin of the scaly face mite. The bird’s legs swell and flake painfully. A medical paraffin is the usual treatment, but you should speak with a vet first before administering it.

These blood-sucking beasts can cause anaemia, and even death. They are often hard to spot, lurking beneath the feathers, but once they’ve fed they will become blood-filled sacks, the size of a large pinhead. The ticks’ favourite spots are on head, neck or between the nape and back.

They can be a problem if your aviary is close to woodland or scrubland frequented by deer. Ticks find a safe, cosy home in aviaries, and if you have an outbreak you might have to resort to a power hose wash-down, an insecticide, and new sand and gravel (if that’s what your aviary floor is made from). The parrots will have to be removed while the aviary cleaning takes place.

These feather-eating pests (Mallophaga) are uncommon in parrots, but aviary birds may catch them from wild birds. The lice grow up to 3mm long, but they can still conceal themselves easily in a bird’s feathers. The symptoms of infestation are violent scratching, frequent shaking of the feathers, and, eventually, a moth-eaten appearance, as the lice nibble away at their host’s coat.

A vet will be able to treat the lice with a contact chemical. Unfortunately, if one of your birds has them, the whole flock is probably infected.

Cage birds can become infected with Ascaris roundworm. These creatures live and breed in animals’ guts, and their eggs are passed on via droppings. The adult worms grow up to 3.5cm long, and several of these in a bird’s gut can leach all the nutrients from its food, causing severe malnutrition. In extreme cases there can be paralysis, but more often the symptoms will be weight loss and listlessness. A vet will prescribe a medicine that flushes the worms out. The adult creatures will be visible in the bird’s droppings. The treatment will need repeating a few weeks later to catch the worms that survived as larvae in the parrot’s gut.

Roundworm is a particular problem in outdoor aviaries, where droppings fall to the earth – a perfect habitat for the worm eggs. Humans can be become infested with the worms too, so swift treatment via vet-supplied medication is important.

Parrots, along with many other birds, have an internal organ called an air sac, part of their respiratory system. This is sometimes invaded by a tiny creature called the air sac mite. It also colonises the bird’s trachea (the breathing pipe between the throat and the lungs). An infestation will affect the bird’s voice – his voice will sound croaky, his whistles will sound hoarse, and he will start to make a clicking, wheezing sound when he breathes. If left untreated the bird will eventually suffocate.

thinking of buying 7 year old cockatoo who has removed most of ots feathers due according to sellershe was only fed sunflower seeds The seller has had the bird for a while and has introduced a new diet and the bird is responding .Is it wise to purchase bird and will the feathers grow back