Which end is the tail?

Have you heard the saying "if you pick a guinea pig up by its tail its eyes will fall out?" Don't panic, the guinea pig has no recognisable tail!!

What about the rest of the guinea pig? Here's a rundown of GP anatomy from the top end to somewhere near where the tail should be...

Guinea pig anatomy, from the eyes to the non-existent tail

The eyes are large and placed on either side of the head. They have a wide field of vision so that they can detect predators coming from above or from any angle on the ground. (However if they live in an Eglu they don't need to worry about predators!) They are unable to see right in front of their noses though - their eyes are on the sides of their heads, and their sight is not particularly good either, although they are believed to see different colors and can certainly see moving objects.

Guinea pigs have a highly-developed sense of smell, and they have whiskers around their nose, eyes and mouth which are very sensitive to touch. The senses of smell and touch are very important when choosing food items (their favorite occupation is eating!), as due to the position of their eyes and their inability to bend their necks down, they are unable to actually see what they're about to eat.

The guinea pig has a very good sense of hearing, and can hear sound frequencies inaudible to the human ear. They can certainly hear you open the fridge door from their home in the garden - and they know the fridge contains some of their favorite snacks!

Guinea pigs have 20 teeth in total, but the visible ones are the four incisors at the front of the mouth, two at the top and two at the bottom. These are used for gnawing and biting their food. The rest of the teeth in the back of the mouth are the molars, and these do the chewing. Guinea pigs chew with a side-to-side movement, and when eating they make around 200 of these movements every minute. A guinea pig is never happier than when eating! The teeth are of a type known as open-rooted, which means they grow all the time. All that eating and chewing on fibrous foods constantly wears them down. It's a rodent thing.

The guinea pig has a complex digestive system to process huge amounts of vegetation. First the food enters the stomach where it is mixed with digestive juices, and any sugars and fat are absorbed by the intestines. The rest of the food passes into the caecum, a huge fermentation vat which takes up 50-75% of the space inside the guinea pigs' abdominal cavity. GPs then produce two types of droppings, the hard ones which they leave around the cage for you to clear up, and soft ones known as caecotrophs, which are full of protein and vitamins - the guinea pig eats these directly from its bottom. It can produce and eat up to 150 caecotrophs a day!

Guinea pigs have a total of 258 bones in their body. There are 34 bones in the spinal cord, 43 in each front leg, 36 in each back leg and the mathematicians out there can calculate the rest, which make up the skull, ribs and breastbone. Despite the impressive number of bones in their limbs, they cannot jump very well, and if they fall they are likely to break a leg, so they must be held and carried very carefully, and not dropped.

p>There are actually seven tail bones, but they are fused closely to the animal's pelvis (its rear end), so there is no recognisable tail on these little creatures. A bit like humans, if you think about it.
Prev Next 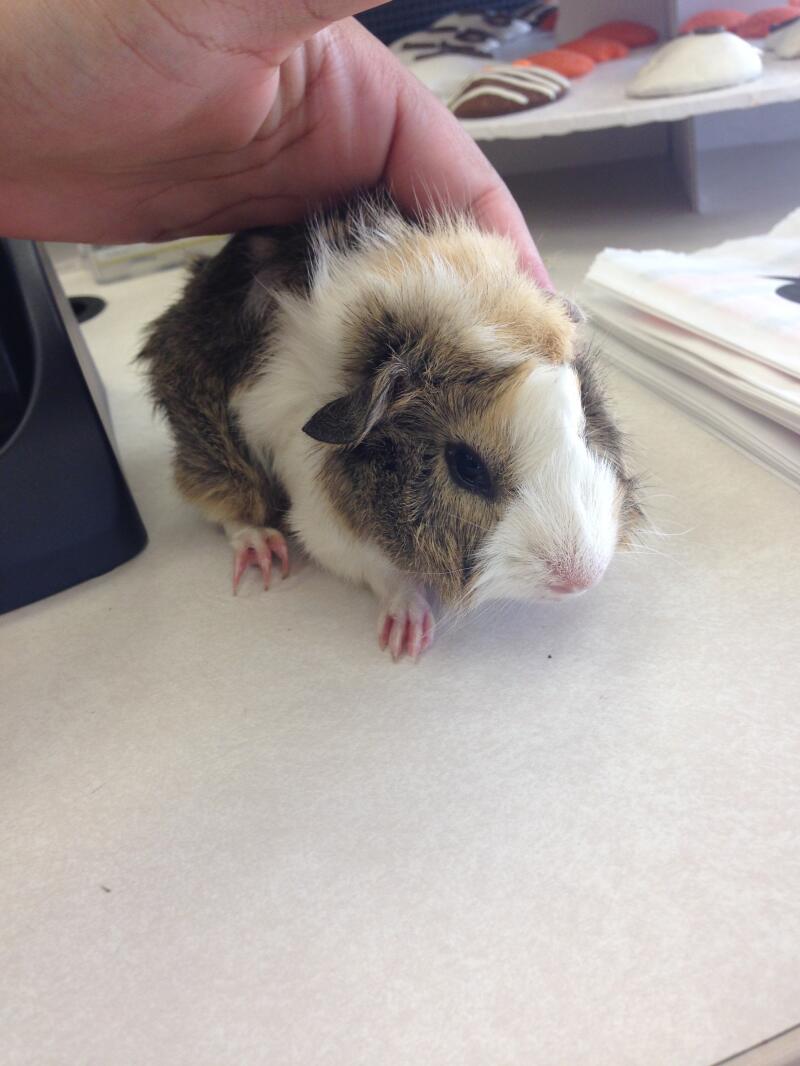 This is really helpful for my school project! 100% relieable

This is really helpful for my school project! 100% relieable

Thx. This helped me alot

cool i have t2 piggies.