How Many Guinea Pigs Should I Keep?

In the wild guinea pigs live in groups of 10 or more. They are social creatures, and need the company of their own kind. As pets they are usually kept in pairs or trios of the same sex. Two females (sows) will live happily together, as will two males (boars), particularly if they are siblings. Two boars of different ages will usually get along together, as long as there are no females around.

If a female and male live together the male will have to be castrated, unless you are planning on breeding them. Make no mistake - guinea pigs can breed on the same level as the metaphorical rabbit!

So, when you buy two guinea pigs, make sure they are sexed properly so that you don't end up with a dozen more GPs than you'd planned!

If one of your guinea pig pairs dies prematurely, you can usually reintroduce another GP to your bereaved pet. If a single guinea pig has to be kept alone, they can get a certain amount of comfort and companionship from a soft toy the same size as themselves. You can also give them a mirror - they then get see another guinea pig all day (admittedly a very blurry one, given that GPs' eyesight is poor), and they get to keep all the food for themselves!

If you keep a male and female together, intentionally or otherwise, they will be capable of breeding from 3-4 weeks. At that point they will need to be kept in separate enclosures until the male is old enough to be castrated. The earliest this can be done is at 4 months old.

Can Guinea Pigs Live With Rabbits?

Although there are exceptions to every rule, and you may know of someone who keeps a rabbit and guinea pig together, this is generally not a good idea. A rabbit can easily hurt a guinea pig with its powerful back legs, even unintentionally, should it stamp its feet and kick the guinea pig by mistake. If the rabbit is male, it can also get amorous, inflicting indignity and possible damage on the guinea pig.

Guinea pigs and rabbits are not the ideal cage companions


The two species also have different dietary requirements. Guinea pigs need lots of vitamin C and rabbit food lacks this. Also, rabbits can carry a bacterial infection called Bordetella which does not affect the rabbit, but might make the guinea pig very sick if it catches it. 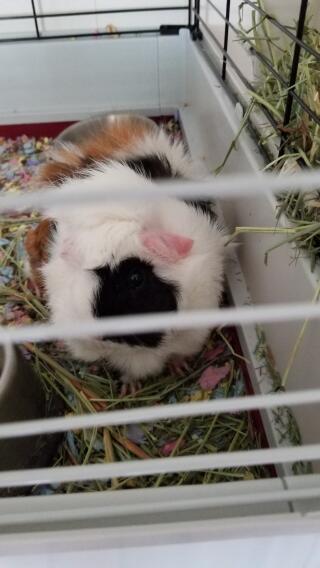 Guinea pigs no longer live in the wild, according to expert sources.

thanks i learned a lot