Keeping Parrots with Other Pets

Birds and mammals don't mix well - in spite of the cute videos of dogs and parrots you often catch online! Even non-carnivorous pets such as rabbits and guinea pigs can cause problems for birds - and the birds, if they're big, can bite back too. There is also the possibility of spreading diseases between the animals. 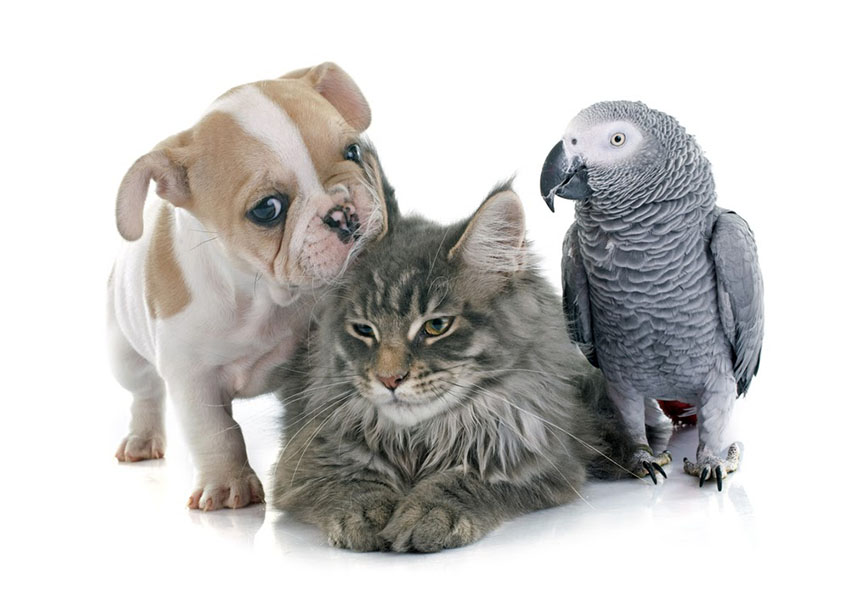 African Greys don't generally like cats and dogs - in spite of this photo - and the feeling is mutual!


Getting dogs and cats used to a bird cage is an important part of their training. This can only be done by letting them have a good look, a good sniff, and plenty of examples of the wonderful noises the creatures in the cage will make. If the other animals frighten the birds, gently let them know that this is not the sort of behavior you expect from a good cat or dog! Eventually the bird cage will be such a familiar sight that the other pets will take no more notice of it.

Unless you have an unusually placid cat, your parrot is not going to be a natural friend of the feline. Even if the animals have known each other since they were young, a kitten will usually grow up to be a dedicated bird-hunting monster, so you can’t guarantee that childhood ‘friends’ will remain so in adulthood.

The most you should hope for is a mutual disdain, with each pet happily ignoring the other. Even this requires a certain amount of training - or acclimatisation - and you may have to give the cat a few blasts of plant-mister water to deter her hunting instincts in the early days.

Cockatiels and cats - hardly a match made in heaven, but not unheard of


One of the problems here is that we’ve all seen those wonderfully cute photographs of parrots cuddling up to cats. Apart from being a bad idea due to the slim but real chance of disease, this is a relationship that goes against nature’s flow. But some owners decide to put in the time and effort required to make their parrot and cat enjoy each other’s company. It’s easier for the naturally inquisitive and sociable parrot, less so for the cat, who’s usual idea of inquisitiveness involves chasing, pouncing and clawing.

There are three essentials for anyone wishing to pursue this ill-advised path. The cat must be very docile; the parrot must be hand-trained; and you must be present at all times when the animals are together. Introduce the parrot, on your hand, to the cat, at a safe distance. Take your cue from the animals, and don’t continue the training it the bird is about to panic or the cat about to pounce. Take it easy. Watch out for any signs that your cat might lash out or pounce, and reprimand her with a firm “No!”, or whatever other word of dissuasion you use. You don’t want to shriek at her, though, as that will panic both the cat and the parrot. Allow the cat to watch and sniff the bird, and let her see that it’s just another part of the household, or an extension of your arm; and let the parrot see that the cat is no more interesting than the average cushion.

When introducing the animals for the first time, make sure you have the dog under control, and allow him to have a good sniff at the cage. Let him watch the parrots moving around. If he begins to bark or jump up so that he knocks the cage, calm him down and make it clear that he’s welcome to watch and sniff, but not to play with the cage or bark at it.

The birds will remain a novelty for a week or so, after which your dog will probably lose interest, and barely raise his head even when the parrot squawks or flaps. The point at which this disinterest takes over will depend on the breed of dog; but many well-trained dogs will soon get the message that they must leave the bird alone. 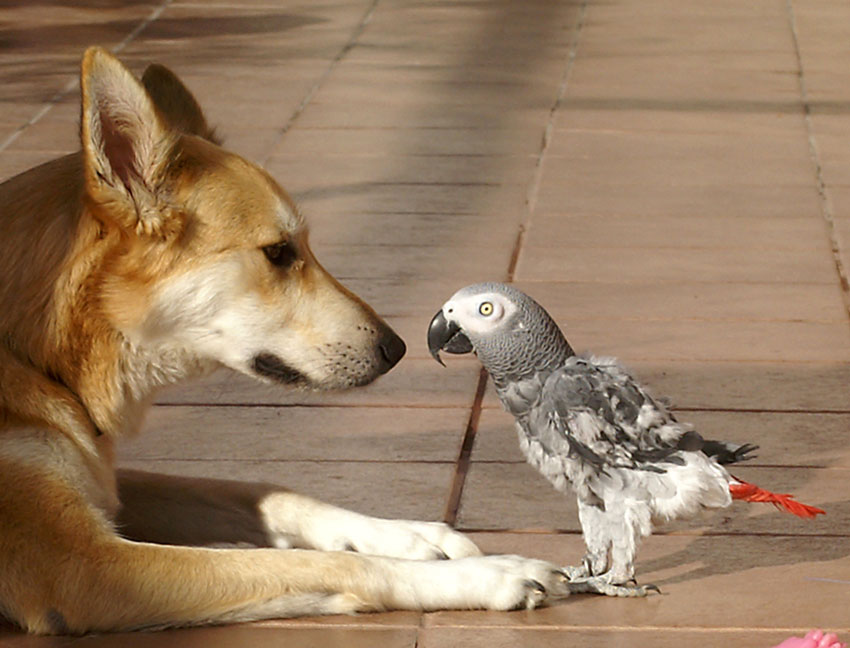 If your dog is a non-hunting breed, well trained and passive, you’ll be able to perch the budgie on or near him without reaction, in the same way as you can (with a very well-trained dog) put food close to his nose without him eating it, until you give the word of command. If he’s not that well trained, don’t let dog and bird meet face to face.