In addition to the Canary and Zebra finch, there are dozens of other finch species available as pets. The following are some of the commonest, and all are members of the Estrildid or waxbill family, close relatives of the Zebra finch:

The Java sparrow or Java finch (Lonchura oryzivora) is, as you might imagine, native to Java. It’s found in Bali and Indonesia too. The bird’s Latin tag oryzivora means rice-eater, and it has made itself highly unpopular over the years by feeding on rice fields in large flocks. This has also earned it the alternative names Java rice sparrow and Java rice finch. Inevitably, wild numbers have been massively reduced by irate rice farmers, and the bird is on the list of endangered species in its native habitat. 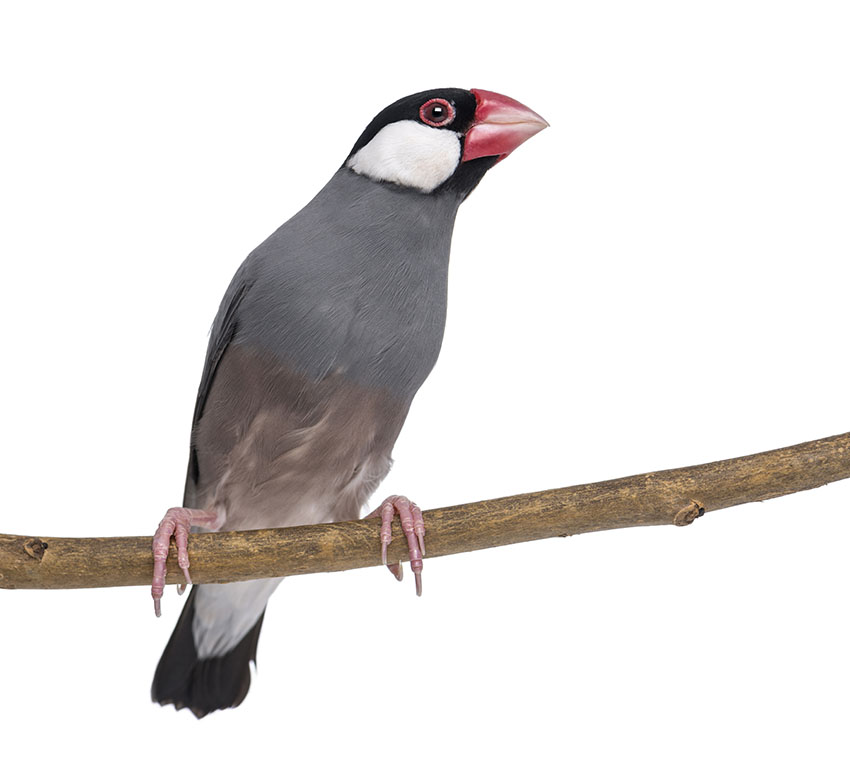 
Introduced populations have established themselves on Hawaii, and there are millions of the birds in captivity. The rice-eating reputation follows it, however, and in California to this day it is illegal to possess a Java Sparrow, in case feral populations descend on the local rice fields. It is also illegal to import wild specimens into the USA.

The Java sparrow is the giant of the pet finch family, measuring 14-17cm in length. Its heavy beak adds to the impression of bulkiness. It’s an increasingly popular cage bird, and favours larger seeds such as oats, white millet and sprouting rice, rather than the fiddly little seeds favoured by the smaller finches. In the wild it breeds in trees and buildings, and will readily nest in captivity.

It is the Java sparrow rather than the Canary that is the grandfather of cage birds in Asia. They were kept by the First Ming Dynasty in China in the 14th century, and became popular in Japan in the 17th century.

This species (Erythrura gouldiaeis) is also known as the Rainbow finch and the Lady Gouldian finch. The Gould in question was British ornithologist John Gould, who first described the bird for western science in 1844. His own chosen name for it was ‘Lady Gouldian finch’, after his wife Elizabeth. 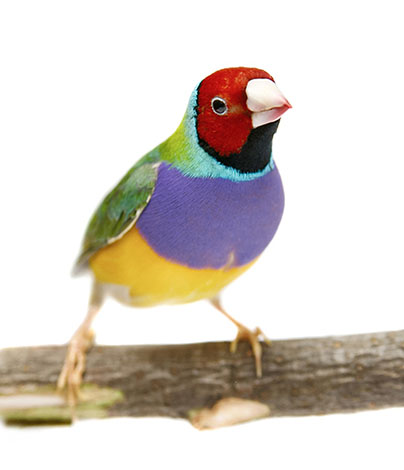 Gouldian Finch - endangered in the wild, but common in captivity


The bird is endangered in its native habitat in the north of Australia; but there are several hundred thousand living and breeding in captivity. The bulk exporting of Gouldian finches during the later 19th and early 20th centuries did nothing to steady its declining numbers. Australian authorities banned the export of the bird in 1960 (along with all other native animals).

The Gouldian is relatively large, measuring 14cm in length. It nests in trees, within easy reach of a water supply. The birds feed in flocks during the dry season, often mixing with similar-sized seed-eating species, seeking out wild grass seeds and sources of water. In its heyday these flocks contained up to 2,000 individual Gouldians, but numbers declined alarmingly in the 20th century.

Gouldians come in different ‘phases’ or head colours. The commonest is the black-headed, which accounts for 75% of the wild population. The other 25% are red-headed. There is also a golden-headed phase, occurring in numbers too low (about 0.5%) to affect these approximate percentages. In captivity, Gouldians have been developed in several different plumage colours, making them the most striking and colourful of the pet finch family.

The Gouldian has an extraordinary genetic juggling trick. Where black-headed birds mate with red-headed ones, most of the resulting female chicks die. This is due to a genetic incompatibility (and suggests that the bird is in the process of diverging into two distinct species, rather than mere subspecies). However, in these situations the hen is able to produce a much higher ratio of male birds (about 4 to 1), ensuring the survival of most of her brood. The mechanism involved in the hen’s ‘choice’ is not fully understood, but the phenomenon has been confirmed by scientific research. In the study, red-headed cock birds’ heads were coloured black to fool red-headed hens. The hens, thinking they were mating with a black-head, produced more male chicks, proving that the female is able to manipulate the gender of her chicks. 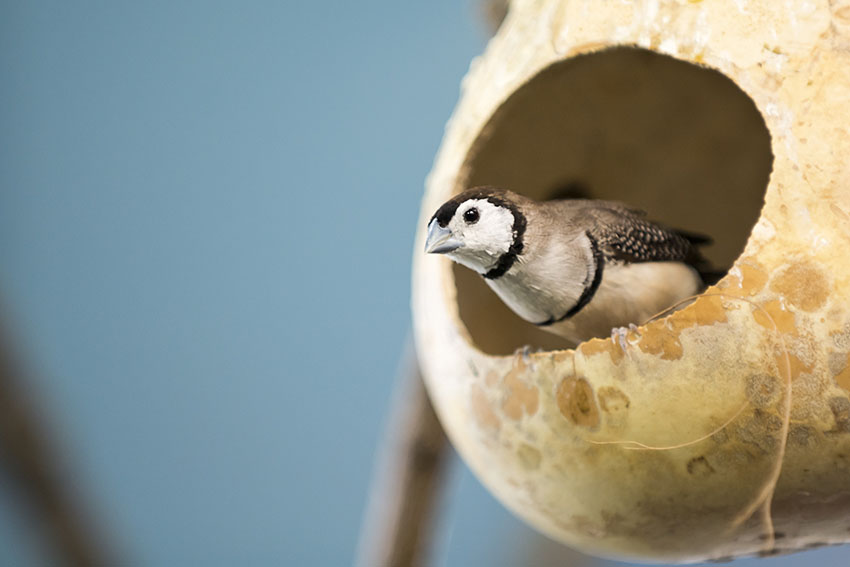 This bird is closely related to the commoner Zebra finch, and many bird fanciers keep the two types together in their aviaries.

This is an oddity, as it doesn’t actually exist in the wild. The 10cm-long bird is now known, through genetic examination, to be descended from the White-rumped munia (or mannikin), which is also known as the Striated finch (Lonchura striata). This was always the most popular theory of origin, but it took the insights of modern DNA analysis to prove it. Bengalese finches are therefore known as Lonchura striata domesticus, and are usually called Society finch in North America. 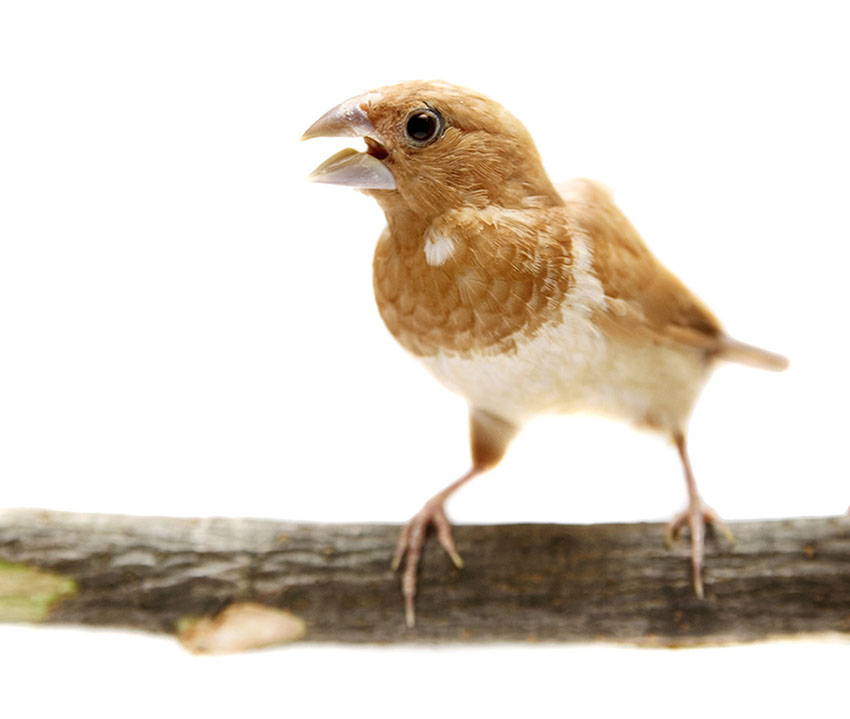 The Bengalese Finch, also known as the Society Finch, only exists in captivity


As a bird bred for captivity, the the Bengalese finch is, not surprisingly, well-adapted to life in cage and aviary. It’s only its relatively drab brown-based plumage that prevents it from being the obvious choice for an easy-to-keep small pet bird.

Bengalese finches are highly sociable, roosting and even nesting together. This is the origin of the ‘society’ American tag. They also mix very well with most other species. Breeders have produced several different varieties over the decades, but they all have brown and white as their basic colours.

The Star finch (Neochmia ruficauda) (10-12cm) is an Australian native. The species has grown in popularity over the last 50 years. There are now several established colour mutations, including a yellow form where the face lacks the red pigmentation and is, instead, dark yellow. There are also cinnamon and fawn variants. Star finches can be a little timid, and need to mix with non-aggressive species. 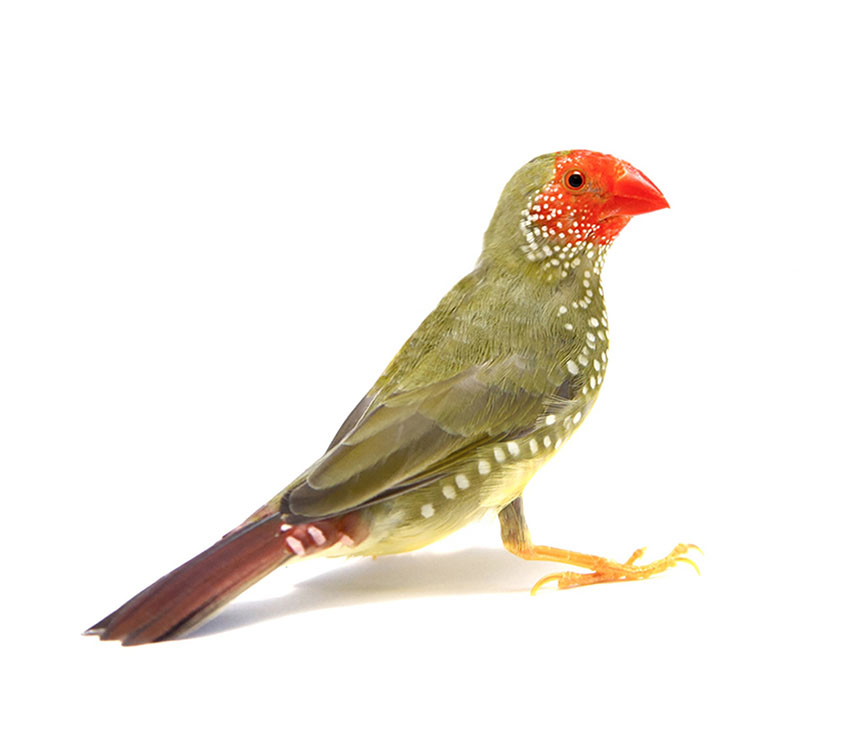 Star Finch - shining bright, in a timid kind of way

The Plum-headed or Cherry finch (Neochmia modesta) (11-12cm) is a close relative of the Star finch, and yet another native of Australian savannah and scrubland. It is not as immediately striking as the Star, and correspondingly less common as a pet bird. It is less timid that its relative, however, and is a good bird for a mixed aviary. 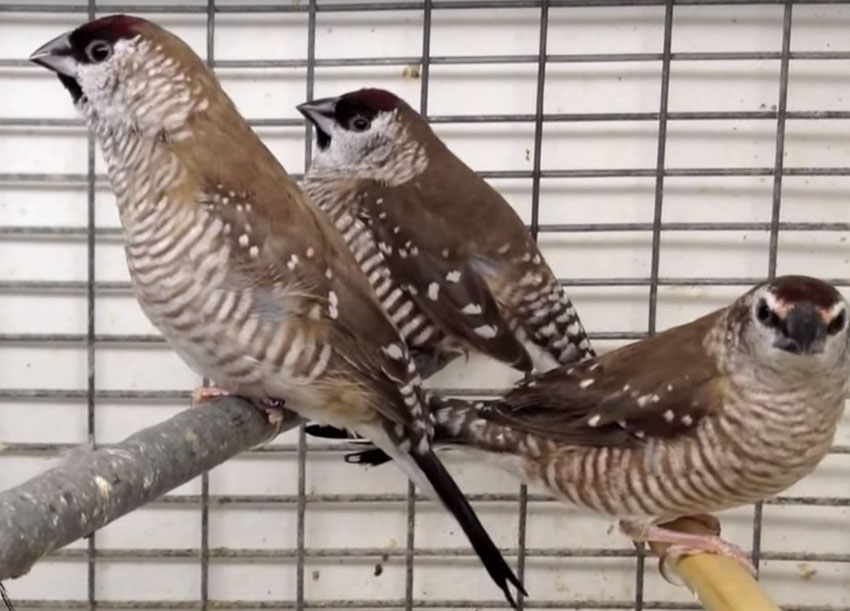 The Strawberry finch, also known as the Red Avadavat or Red munia (Amandava amandava) (9-10cm) is a striking little finch that inhabits the grasslands of tropical Asia. The cock bird, with his red and speckled plumage, is one of the most visually striking of all the Estrildid finches. These colours only last through the breeding season, though, and for the rest of the time he is brown and yellow, like the hen. They can sometimes become aggressively territorial, and require green foliage in their cages for cover, which limits their popularity to keepers of outdoor aviaries or bird houses. They do, however, feast on insects, including fruit flies, which makes them a handy predator in an aviary. The names amandava and Avadavat come from from Ahmedabad, a city in the Indian town of Gujarat, which used to export the finch for the international pet trade. 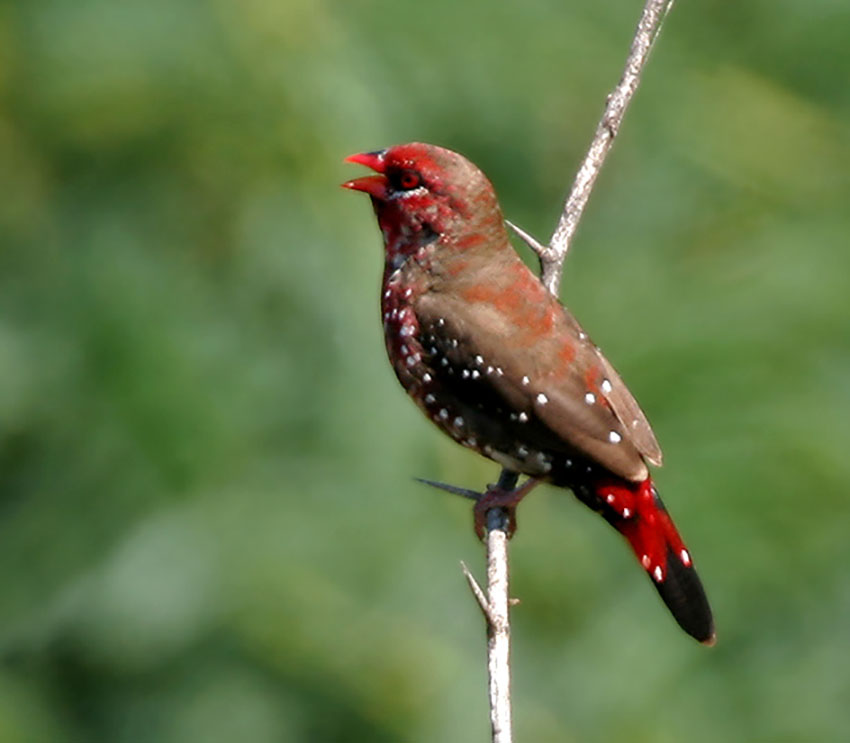 Strawberry finch - pick of the crop

The Diamond firetail (Emblema guttata) (12cm) is another Australian native, very striking with flashes of red and paint-splodge-like white spots. There are a few variations in domestic birds, including the yellow diamond, which has orange instead of red. Its beauty makes it an impressive bird in an aviary, and partly offsets the fact that it can be cantankerous, especially in the breeding season. The bird is sometimes referred to as the Firetail finch, which confuses matters as there are other species referred to in this unhelpful way: the Red-browed firetail (or finch) (Neochmia temporalis), the Beautiful firetail finch (Emblema bella), and the Painted firetail finch (Emblema pictum), all of which are sometimes kept as cagebirds. 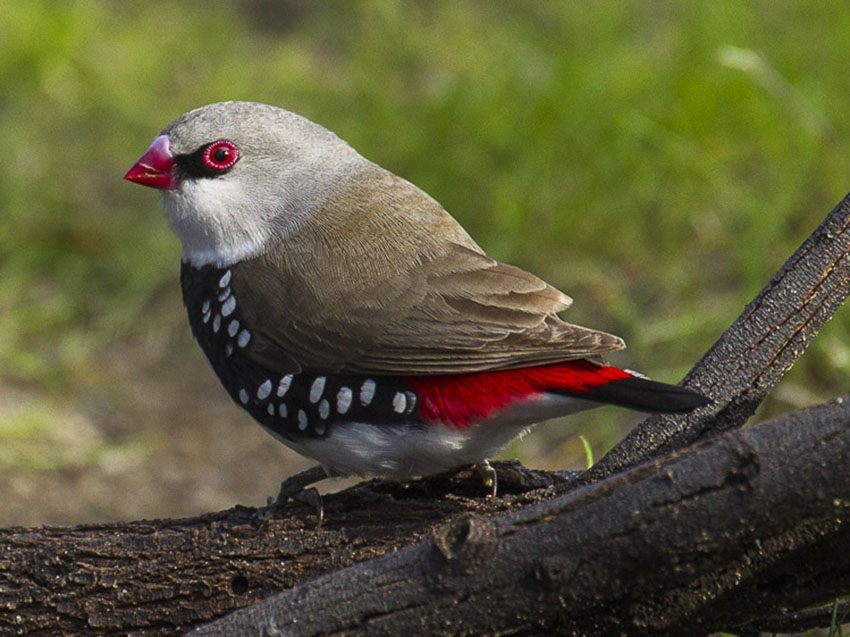 The Red-headed or Short-tailed parrotfinch (Erythrura cyaneovirens), the Red-throated parrot finch (Erythrura psittacae) and the Blue-faced parrotfinch (Erythrura trichroa) are all kept by aviculturists. They measure between 10 and 12.5cm, and are natives of the Samoan islands and neighbouring islands off the eastern coast of Australia. They are very striking birds, with a combination of reds, greens and blues. There is a yellow-headed variety of the Red-headed in captivity, called the Sea-green. The birds are generally easy to keep, and although not as sociable as most pet finches, they mix well with their own kind and other species, as long as there’s plenty of space. 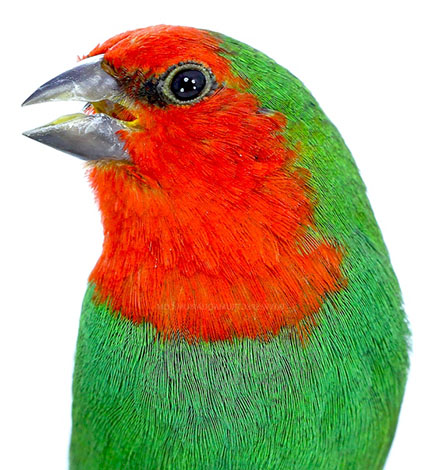 Red-headed Parrotfinch - one of several types kept by finch fanciers

The Cut-throat finch (Amadina fasciata) (12-13cm) is also known as the Bearded finch, Ribbon finch, Cut-throat mannikin, Flame-throated amadina, Flame-throated finch, and several other variants too. It is found in many African countries, with an introduced population thriving in Portugal. It’s a relatively aggressive species, notorious for wrecking the nests of other birds in the aviary, but it finds a balance when mixed with its own kind or similarly robust species. Cut-throats reach 13cm in length. 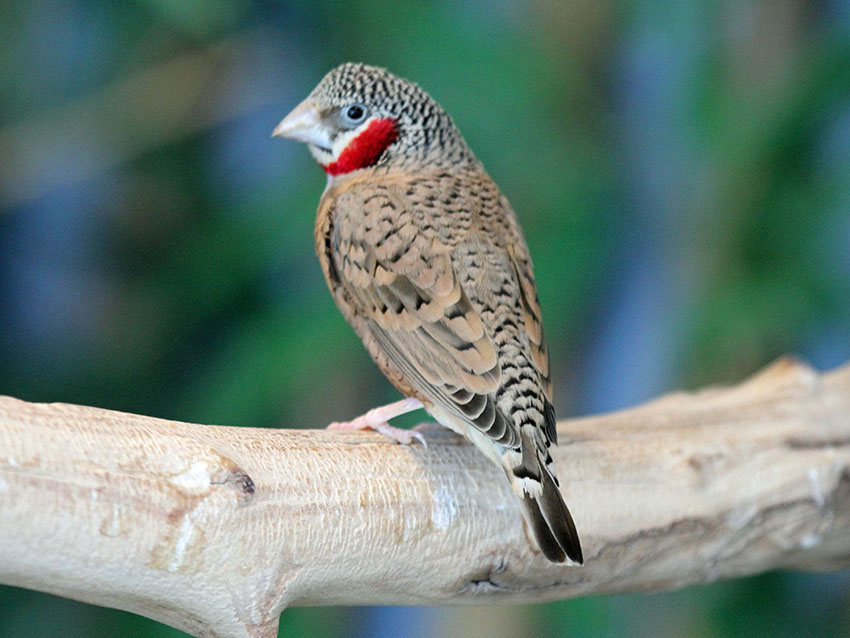 Cut-throat finch - with an aggressive temperament to match its name

The Lavender waxbill (Estrilda caerulescens) (10cm) needs lots of space, in spite of its relatively small size. In crowded cages they tend to get stressed, and can also be a little aggressive. In the wild they are found in several tropical and subtropical African countries, with an introduced population well-established on Hawaii. They are prized cage birds, and command a high price in the pet trade. There are several other closely-related species of waxbill on the market too. 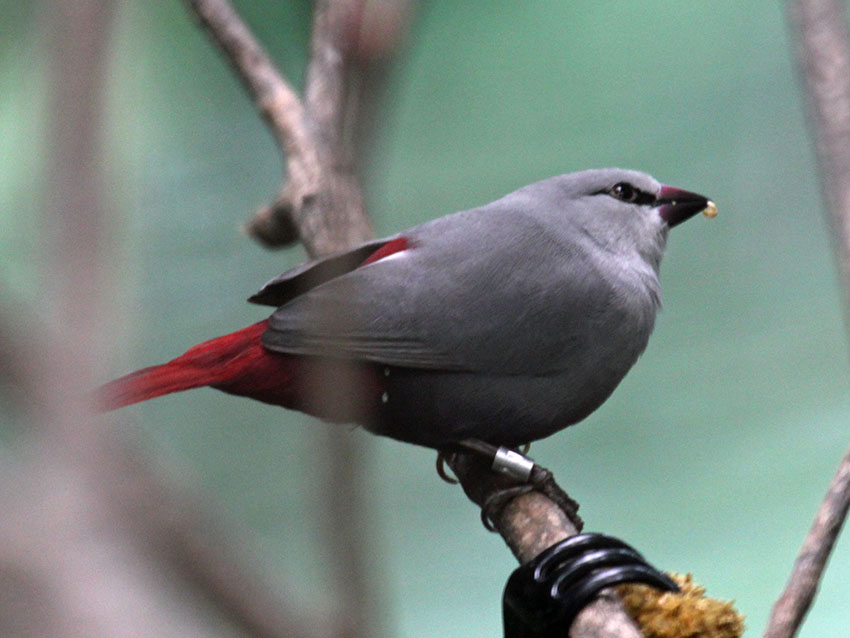 The Chestnut munia (Lonchura atricapilla) (11-12cm) is also known as the Black-headed Mannikin/Munia/Nun. This Estrildid finch has a wide range in Asia, including south China, north-east India, Indonesia, Malaysia, Thailand, Vietnam, Taiwan, Singapore and the Philippines. There are 10 subspecies, reflecting this wide range. Hawaii has feral populations of Chestnut munias (one of a number of introduced birds that have played havoc with the native Hawaiian fauna over the last 100 years). They are sociable birds, flocking wherever there are grasslands and water supplies. It is one of the many finch species that finds cultivated fields irresistible. 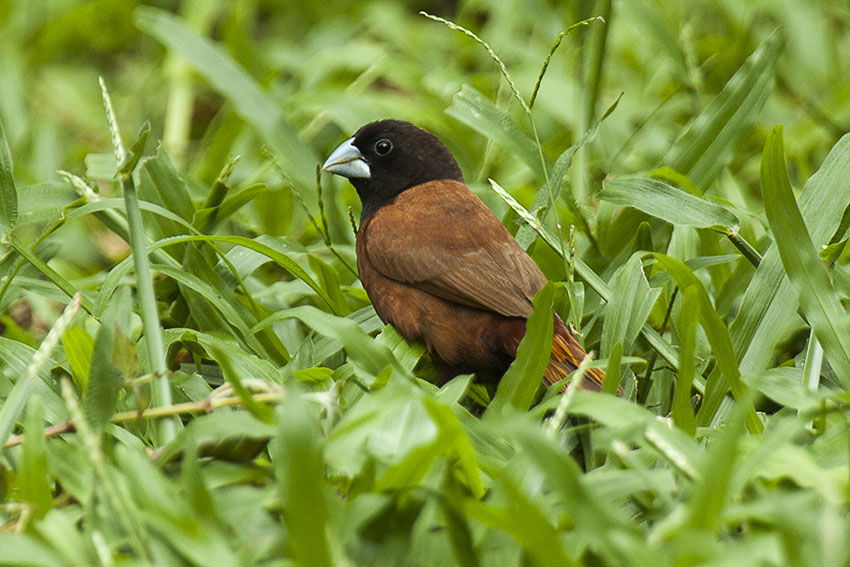 Also called the Spice finch, Spotted munia or Nutmeg finch (Lonchura punctulata), this 11-12cm bird has a wide range across tropical Asia, with several subspecies, and is a popular pet worldwide. It’s a flock bird, living in groups of 100 or so, and feral populations are doing very well in parts of Australia, the USA and Puerto Rico. It is one of the easier munias to breed. Cock birds have a quiet voice, so they’re a good choice if you don’t want a noisy finch. The common name refers to the scale-like pattern of white and brown on the bird’s front. 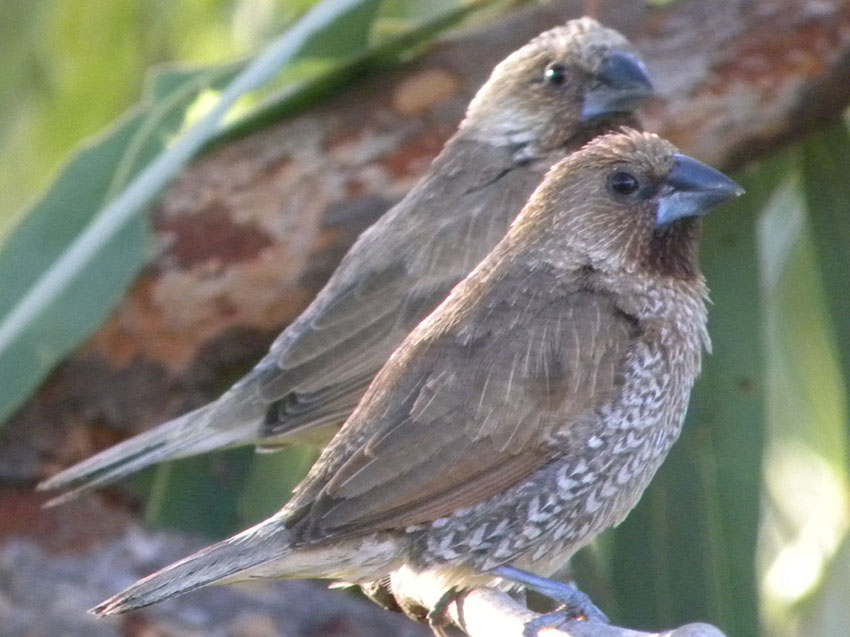 Scaly-breasted munia or Spice finch - easy on the ear

Take to a veterinary hospital for your pet