How Do Rabbits Establish Dominance?

Rabbits are herd animals by nature, living in large groups with many other rabbits. For this reason it is strongly recommended to keep at least two rabbits. Being herd animals, rabbits form connections with the other rabbits around them. These connections can be friendly but can also be unfriendly. There is a certain social hierarchy that rabbits will set up, with some being the “top dogs” of the group, some being wedged in the middle and some unlucky souls who find themselves at the bottom of the pecking order. Within every group of rabbits there will be a fair amount of dominance-asserting behaviour between individuals. It helps to know what all this behaviour means and when it is getting out of hand.

If your pet rabbits seem to be getting along, then it’s likely they will need to spend some time sorting out who is in charge. Even in groups that get along well there will be the occasional squabble when an individual gets slightly too big for his boots. Once things have been sorted out, everything will settle down again. 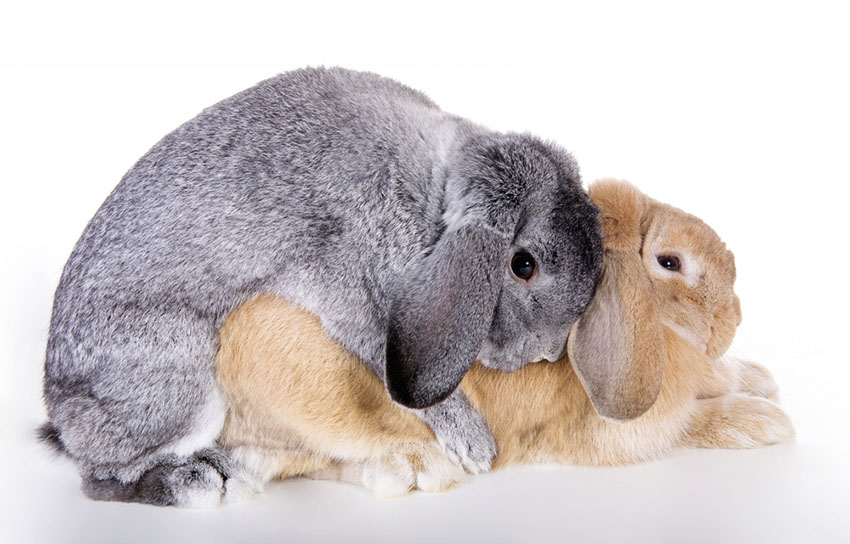 Mounting is often used as a demonstration of dominance


However, in the unlikely situation that things don’t improve, you may need to take more direct action. If a certain rabbit is very problematic, it may be a good idea to get them neutered. This operation usually greatly decreases aggression in both sexes, and helps prevent some potentially fatal diseases in female rabbits.

Below are some of the ways in which rabbits show one other that they’re not to be messed with. However, if one of your rabbits is being persistently bullied then you’ll need to step in and separate the warring bunnies. Constant harassment is very stressful for the victim, and fights can become pretty serious.

Some ways in which rabbits can establish dominance are as follows:

This dominating behaviour can extend towards you as well as to their rabbit companions. The top-bun-in-the-run may demand grooming services from you, too. If your pet ever nudges you before lowering its head, then they have just indicated that they would like you to groom them.