This is a fungal infection, brought on by damp living conditions and/or stress. Infected birds quickly lose weight, and are short of breath. It’s an uncommon condition, and proves fatal in most birds. A vet will offer medication to kill the fungus, and the finches’ living conditions will need improving.

Aka macrorhabdiosis, or megabacteriosis. AGY blooms in the bird with no outward sign of trouble, and the first thing you might notice is weight loss, in spite of the finch eating with its usual gusto. Undigested food in the droppings is another sign, or the bird may vomit food and mucus. Sometimes bacteria take advantage of the bird’s lowered immune system, causing a secondary infection called wasting disease, or “going light”. Drugs can combat AGY, and the ill bird’s diet will need changing to omit all sugary foods. Unfortunately, AGY has a habit of lying fallow and then blooming again a few weeks later.

The first sign of this will be breathing problems. The infected bird will sit with its beak open, breathing very quickly. When the infection has taken hold there will be scab-like marks on the bird’s skin and yellow ulcerations in the mouth. The finch must be removed from its cagemates as soon as possible; although most outbreaks result in the death of several birds, such is the rapidity with which it spreads. 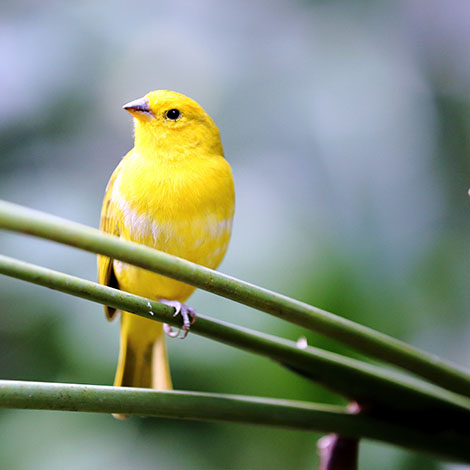 Disease can spread quickly through an aviary, so early diagnosis is important

This condition causes birds’ feet to swell and become misshapen. It’s caused by an infection usually associated with dirty roosting surfaces and perches. An over-fatty diet and lack of exercise can also encourage bumblefoot. A vet will prescribe an ointment to combat the disease, but an equally important remedy is to clean out the cage or aviary and supply lots of natural-wood perches that encourage the birds to hop around and ‘explore with their toes’. After an outbreak it’s a good idea to disinfect all perches, floors and ledges.

This is another yeast infection, caused by the Candida organism. It can bloom anywhere in a bird’s digestive system from the crop downwards. Some of the symptoms are similar to AGY infection – listlessness, vomiting and loose droppings. The vomit will have a nasty smell, and the bird’s crop may swell up with yeast gases. In advanced cases the finch will suffer loss of balance and shaking fits. A vet can administer drugs to combat it. The cure takes about one week, and all yeast-feeding sugars (such as those in fruits) should be temporarily excluded from the finch’s diet.

This is a yeast infection manifesting as conjunctivitis and nasal discharge. Infected birds seldom die, and some show no symptoms but are carriers. A vet will prescribe a medicine that kills the yeast. There are other possible yeast-borne infections too, and keeping cages and aviaries clean is half the battle against them.

This is an inflammation of the vent, or cloaca. It tends to affect hens more than cocks. A swollen abdomen and sore-looking vent are the first symptoms. The bird may also be constipated, and there may be sticky faeces on the feathers around the vent. The problem is often diet related, or may occur after egg-laying. The bird will need to be netted and cleaned. A vet will sometimes recommend a zinc oxide ointment for the sore area.

This occurs most frequently with Canaries. The symptoms are a crusty discharge around the eyes, covering the eye entirely in extreme cases. The eyes will be swollen and sore-looking. In advanced infections the bird’s breathing is affected too, and death soon follows. The causes are varied, including bacteria, fungi, nematode worms, or physical injury. Your vet will prescribe a suitable treatment. 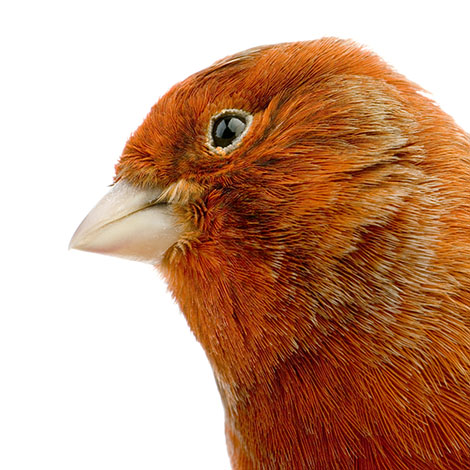 Canaries are prone to conjunctivitis

If you keep many birds, it may not be immediately obvious that a particular finch isn’t pooing as freely as usual. The cause of finch constipation is nearly always dietary – the bird needs more liquid and fibre. Temperature swings can bring on the problem too. The symptoms include a swollen belly, an irritated vent, and the tail bobbing up and down as the finch strains to pass droppings. A vet may wish to prescribe water-soluble medicine, or a charcoal and cod liver oil mixture.

This is an intestinal inflammation that leads to diarrhoea, lethargy and weight loss. It’s usually caused by rotten food, leading to infection by bacteria such as Salmonella, E.coli and Pasteurella. Poor hygiene is the conduit for the bacteria, which thrive in wet conditions (making enteritis a perennial problem in Great Britain!) Exposure to infected rat, mouse or wild bird droppings is an alternative starting point. The symptoms can be treated with antibiotics and multivitamins. A diet of wet foods such as greens and soft fruits will aid recuperation. Ask your vet for advice: some forms of the infection are more deadly than others.

Infected birds have sore-looking, watery eyes, accompanied by a nasal discharge that gums up the nostrils and stains the cere. The feathers around the eyes will be dirty and matted too. Finches become short of breath, which often makes owners suspect the dreaded Avian pox; but the soiled facial area and bunged up nostrils are clues as to the true nature of the problem. The disease can be treated with antibiotics, and many birds pull through.

This usually affects young birds. The symptoms are lethargy, fluffed up feathers and loss of appetite. The condition is not treatable, and many birds die. Those that survive sometimes develop odd, elongated beaks. If there is an outbreak amongst your finches (verified through blood tests) the infected birds should be isolated, and breeding should be discouraged. This helps the finches build an immunity, and means there will be no vulnerable chicks to catch and spread the disease.

Avian TB is a killer, and vets will often recommend euthanasia to contain the disease. An infected bird will quickly lose weight, have very loose droppings and be short of breath. For birds that survive, long-term quarantine is necessary.

I have a zebra finch that has a very swollen crop. She is still very lively and shows no other symptoms. please advise .

My male Finch has sore underneath foot. I have different perch sizes. I use clean and safe disinfectant. Appartley kills all bacterria. The diet everyday is.Rommane lettuce, cooked corn on the cob, Finch food, emp, and millet . They have sand in cage. Any advice. I have budgie and canary and benglese in with zebra finch, no problems.

I took in a Canary about a month ago from a friend and one day i noticed it had blood in the cage. but that stopped and now i notice it has a large lump coming out of his lower chest. do you or anyone know what this is and can it be treated.

We have a young female zebra finch that is losing her feathers on her head. Her father had the same thing (spread down from his head to his back) and ended up dying. We thought, at first, it might have been his mate feather plucking, but now that the offspring has the same thing happening, that doesn't seem likely. Vet didn't find anything wrong with the male, but we haven't taken the female in yet. Any ideas what it could be? Could it be something contagious or passed down through the genes? Any idea if antibiotics would help and how they would be admistered to a little finch? Thank you for reading.

Hi there i hand fed a baby Zebra finch everything was fine now that she is bigger suddenly her vent is swollen and little blood around the vent area but she is still a baby dont know if she is a female or male. What can it be she ate and poop looks normal. Feather little puff. Same help please. I put some F10 ointment on.