Catching diseases from caged birds is not a common occurrence, and simple precautions should suffice – i.e. keeping everything, including your hands, clean. However, at-risk groups with weak immune systems (infants, the elderly, the sick) should be far more cautious, and avoid handling birds altogether.

Humans can catch diseases from any pet animal, if hygiene is poor. Classic disorders include bacterial infections such as salmonella, spread via infected bird droppings if you don’t wash your hands after cleaning cages. It’s not a common occurence, though, and a clean cage and clean hands all but eliminates the problem.

Some other possible nasties are worth mentioning, even though they are rarely an issue with pet finches.

Allergic alveolitis. This is a bronchial disease that occasionally affects humans, usually after several years’ contact with birds. This has earned it the name ‘pigeon fancier’s lung’, as a homage to those dedicated people who spend lots of time in pigeon lofts with their prized birds. It will only be a potential threat if you spend a lot of time in your aviary. The cause of the problem is dust from bird feathers and dried droppings.

If you develop asthma-like symptoms, speak to your doctor and mention your exposure to the birds. Continued exposure will only make it worse. In its chronic form, if the sufferer has failed to stop breathing in the irritant, the process can no longer be reversed, and lung capacity will be permanently diminished.

Asthma (in general). People prone to asthma may be affected by any bird, including pet finches. In severe cases the presence of a bird in the same room as the sufferer will bring on the wheezing and other symptoms, and the only solution is for that person to leave the room. Asthma sufferers with a less severe condition should be fine near finches, but may start to show symptoms if the bird is free-flying. This general asthmatic problem is not to be confused with the condition known as Allergic alveolitis, described above. 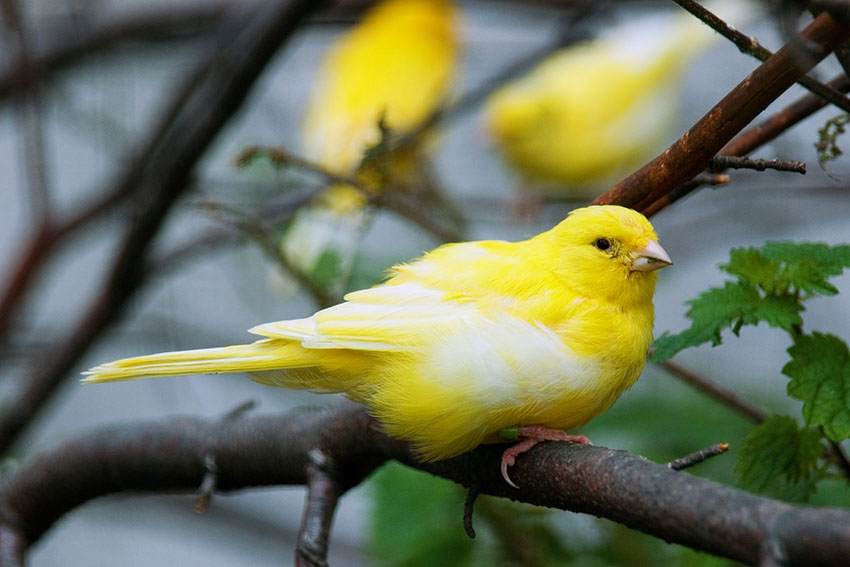 Catching a disease from a Canary or finch is uncommon... but it's not unheard of


Chlamydiosis or Ornithosis (more famously known as parrot fever (or psittacosis) due to its association with the main culprit species). This is a bronchial disease that usually lies dormant in a bird, without provoking symptoms; but it can still be passed on via droppings or saliva and other bodily fluids, or in body dust (dander) shaken from the feathers. In humans, ingesting or inhaling a dose of the Chlamydiophila psittaci bacteria responsible for the disease can, if you’re unlucky, lead to illness.

The word ‘unlucky’ is very appropriate, as many people work with birds all their lives without ever showing any symptoms of the disease. But it still pays to be cautious. Always wash your hands after handling pet birds or washing their cages.

Manifestations of parrot fever in humans range from flu-like symptoms and a sore throat, to high fevers and diarrhoea.

Giardia. This is one of several intestine-incubated nasties found in birds, and is similar to the more well-known salmonella. It’s transmitted via birds’ droppings, and can therefore contaminate cages, the finches’ water supplies, and the surrounding ground (if your birds are outside). Diarrhoea-like symptoms hail the onset of a rapid decline and death in birds; and humans who contract the disease will also suffer gastro-intestinal problems and sickness.

Hi there I've kept zebra finches for five years now. I began with four and now have 16 in a very long flight cage in my living room. I clean them out three times a week. Recently I've read upon things that birds can give you. I'm ocd anyway but constantly obcessed with getting the allergic aveolitus. Should I sell them to someone who can house them in a separate housing?

Hi, I work in a pet shop and all the finches and canaries in the aviary are dying one by one everyday. I cant find an explanation why this is happening. Its mostly the zebra finches. They don't look ill at all there's about 1-3 dying everyday in the past couple of days. Can anyone help me out ??

I am house sitting for a friend whom has 6 zebra finches - 3 pairs - in a very small cage. ( I will insist on a larger cage when she returns) One is excessively plucking itself, and it also has huge lumps on its feet that he picks at till it bleeds. He seems to be itching?? Is there anything I can do? The vet gave ointment for scaly feet, and I have put him in his own cage, provided a little nest with nesting material, put some fruit and veg out for him as well as egg yolk (cooked), but I feel that his behaviour is more parasite like than just mating hormones because of the apparent itching. We live in a small town in South Africa and veterinarians are limited, and no one specializes in birds... any home remedies, or advice would be much appreciated. Kind regards

good advice someone who knows what they are talking about