A Brief History of Rabbits

The original European wild rabbits evolved about 4,000 years ago in the red shaded area of the world known as Iberia. In fact the visiting Phoenician merchants referred to part of Iberia as 'I-shephan-im' which means land of the rabbits. This was translated as 'Hispania' or as we know it - Spain. The scientific name for rabbits is 'Oryctolagus cuniculus' which sounds much more complicated than it actually is because it means 'a hare-like digger of underground passages'.

Life was peaceful for the rabbits until the Romans arrived in Spain during the Second Punic war in the 2nd century B.C. Much to the rabbits dismay the Romans quickly cottoned on to the idea of farming them in a practise known as cuniculture. Initially they kept them in fenced off scrubby areas, but using the first known example of a now standard prison escape tactic, the rabbits kept tunneling out! It wasn't long before every rabbit enclosure was as closely guarded as the emperor's own palace. Could this slightly unwise use of centurions have contributed in a small way to the downfall of the Roman Empire?

The increasing trade amongst countries by sea and land helped to introduce rabbits to every continent except for Antarctica. Humans were now getting good at growing crops and as more land was cultivated into fields full of food, humans inadvertently provided rabbits with ideal habitats to live in. Combined with their famously fast breeding rate this ensured that they established themselves quickly wherever they went.

The domestication of rabbits is believed to have begun when medieval monks began to keep rabbits in cages for food. Newly born rabbits, Laurices, were not considered to be meat and were therefore allowed to be eaten during Lent. Monks tend to be dedicated fellows and it wasn\'t long before they were studiously selecting and breeding rabbits to create new fur colours.

The industrial revolution meant many people moving from the countryside into towns and they brought their rabbits with them. As a pair of rabbits can produce up to 90kgs of meat a year they were an important source of food. But in the 19th century things started to look up for the rabbits as the Victorians began dabbling in breeding them for shows and competitions. Since then we have more or less stopped eating rabbits in the UK although in many other countries they are still a regular part of the diet.

(The earliest painting with a rabbit in it was painted in 1530 by Titian 'Madonna with a Rabbit'.) 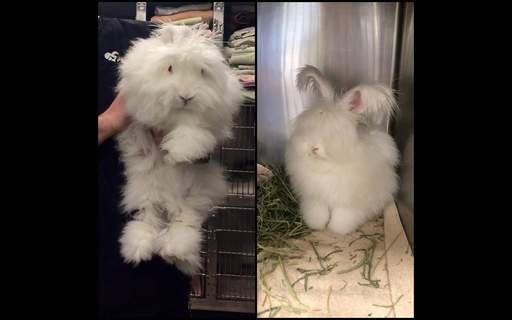 Interesting article about rabbits. What does it mean to be native, particularly in relation to ice ages? I read somewhere that the Romans only reintroduced them. Any ideas? Thanks

Rabbits have been around over 3000 years. Domestic rabbit history goes back over 2000 years when the European rabbit was introduced to Italy

Hey, nice concise overview. I learned some fun facts. But saying that "since [the 19th century] we have more or less stopped eating rabbits in the UK" is patently wrong and doesn't do the bunnies justice. During WWII for example, raising rabbits for meat at home was hugely popular, and actively encouraged to help with the war effort. And many have continued to raise rabbits for food because they can be raised humanely and conveniently almost anywhere under diverse circumstance and are extremely economical, productive, low-imput, low-impact, and self-sustaining. We keep a tiny herd of rabbits on our farm in the US and find that enjoying their adorableness and allowing them to feed our family are not mutually exclusive. And they cost almost nothing to feed beyond the labor inputs of caretaking while contributing manure to our soil. Cheers!