Most parakeet owners stop short of becoming bird breeders. But there are still plenty of enthusiasts who like to add to the ever-growing budgerigar population of the world. Given the right materials and space, parakeets breed easily, and as long as you present them with a suitable environment you can usually rely on the birds to simply get on with it, without much intervention from you.

Parakeets in an aviary tend to pair up. However, many breeders – especially those who breed birds for exhibitions – are looking for the magic formula, the two birds whose combined genetic heritage will result in the perfect show bird. In a mixed flock, this means intervening to pair Opaline with Opaline, Crested with Crested, etc. If your aim is sheer colour and variety, though, letting them match up and get on with it by themselves will do the job.

If your chosen pair of parakeets fails to bond, you can take it as a sign that you need to do a fresh spot of parakeet matchmaking. Give them a day or two before intervening, however – it is common for a pair to be defensive or belligerent at first if they’ve been thrown together for the first time by a hopeful breeder. 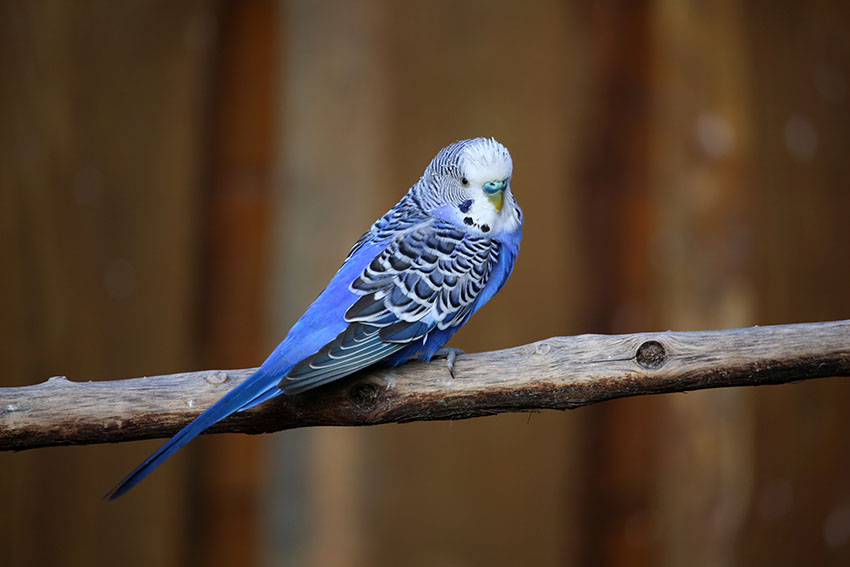 Healthy parakeet all perched and ready to go

Parakeets in the wild breed during wet spring and summer periods, which means they find themselves in the mood for much of the year in northern Europe. They also need long daylight hours to stimulate the mating instinct. In the UK, many breeders pair up birds in November in order to have new birds ringed (i.e. a ring put on their legs) in the new year. This annual ringing is synchronised for January 1st in the UK, and it means there are new, young birds ready for spring shows.

Stimulation for breeding birds can be provided by artificial light. They need 12 hours of light a day during this time, and the sunshine that makes it through your windows (if the birds are indoors) is not enough to satisfy their vitamin D needs (sunlight being a necessary part of vitamin D metabolisation). You will find suitable fluorescent lights at a specialist pet store – ask other breeders for advice on availability and the specific requirements of your cage or aviary set up.

Parakeets are physically able to breed after six months, but should not be allowed to do so until they are at least 10 months old. A younger bird will often fail to be a good parent. There’s no hurry - once they’ve matured, females will be able to breed for four years, and males for six.

First-time mothers sometimes lay eggs outside the nesting box. This is fine, as long as you put the egg in the box as a signal that this is where the others should be laid. Once she’s settled on an egg in the cosy box, she won’t repeat the mistake.

A varied and nutritious diet should be a permanent fixture in your parakeets’ life, and you don't have to change the standard feed during breeding. You should, however, provide a protein-rich side dish such as egg food (see the recipe in the Parakeet Recipes section, above).

If you keep lots of parakeets, you will need to give them personal space for breeding. This can be in the form of compartments in an aviary, or you can install the pair in a breeding cage. This should measure at least 60 x 40 x 40 cm. It will need to be equipped with standard parakeet accessories – at least two perches, a mineral block, a cuttlefish bone, plenty of seed and fresh food and water, and a nesting box. The cage will also need two doors – one for access (for your hand) and the other for allowing passage to and from the nesting box - if you are breeding the birds in a cage, this should be attached to the outside.

Once the chicks have weaned (at about six weeks) you will need to transfer them to a large cage, or a separate section of the aviary. This should be supplied with plenty of food, water and perching space.

Parakeets need cavities to mate and nest in – something that simulates the tree holes they favour in the wild. Nest boxes made of wood are a perfect substitute. Parakeets are minimalist nesters, and need little more than a dry floor area to lay their eggs on, lined with a soft nesting material (untreated wood shavings or shredded paper will do).

The floor of the box will need to have a concave section, to help the chicks grip - this will prevent the condition known as splayed feet, which sometimes occurs if the chick has been standing on a hard, flat floor. (See Parakeet Splayed Feet, above).

Install the boxes in your aviary, or fix one to the outside of the cage (whichever is applicable). This should be done in such a way that the female, (and, later, the chicks) has access to the cage via the open (i.e. removed) door.

Nest boxes should be cleaned with a solution of one part white vinegar to two parts water, before the female parakeet has settled in.

My pair have been together about 3 weeks. At first they squabbled a lot, but lately appear to have gotten quite cosy. They pass food to each other and snuggle up as love-birds would, especially in the evening/night-time. Do you think they are ready to mate and should I get a nesting box just in case?

Budgies breeding season starts from August to April. But If you provide the best environment, ensure the provision of seed mixes with soft food they can breed a whole a year. However, there must be a break or off-season to ensure best health of the parent budgies.

For those of you searching that when is your budgie pair start mating then - it usually take about 17 days as far as I have counted they will kiss each other several times a day then when the female is impressed with the nest and ready she'll do mating with male automatically also Some of the people asked about a concave flooring the answer to that is take a piece of would that fits right into the nest box and make a simple circular whole in it ! Done it should be atleast 2 cm thick