Parakeets and Other Pets

Parakeets are able to live with some other small birds (see Keeping Parakeets with other birds, above), and will usually be happy to share a roof with larger birds too. As long as these birds aren’t perched too close, that is. 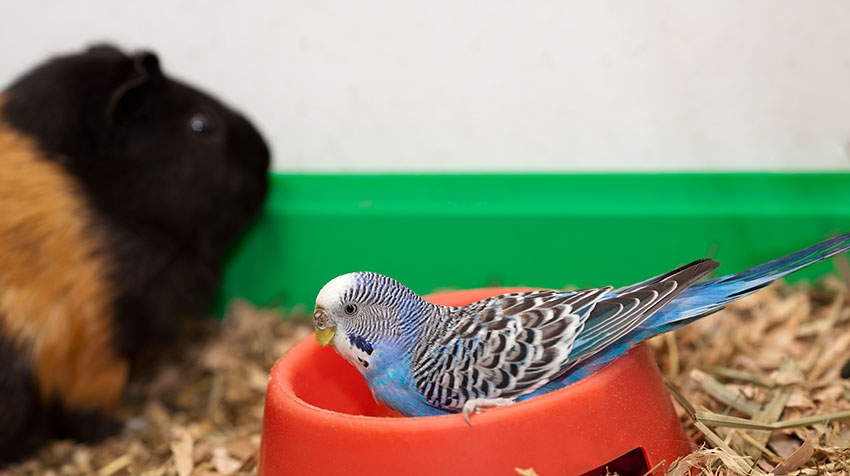 A parakeet with a guinea pig


Non-carnivorous pets such as rabbits, guinea pigs, hamsters and chickens do not pose any real threat to parakeets (unless you happen to have a male with a territorial mean streak). Watch the animals carefully when they are free-roaming the same room. In most cases the two animals will just ignore each other. The problem is that this is in “most” cases, as a cheeky parakeet who decides to nibble your rabbit’s ear might be in for a nasty surprise.

Placid pets together in a confined space will usually just ignore each other. It’s very rewarding when all your pets seem to get on just fine, but you can never take this equilibrium for granted, so be vigilant and always be prepared to scoop your parakeet up to safety if need be.

The relationship between a parakeet and your pet dog is usually an easy going one, with the exception for some breeds that can never fully curb their chase-and-kill instincts. Dogs will, naturally, show an interest in your birds. The trick here is to make sure that you are making sure that the dog is able to meet the new-comer without stressing out your birds too much. (The same applies if the birds were there before the dog.)

When introducing the two animals, make sure to have your dog under control, but at the same time allow them to have a good sniff of the cage. Let your dog watch the parakeet moving around. If they begin to bark or jump at the cage, calm them down and make it clear that they are most certainly not allowed to do this.

Your parakeet will remain a novelty and be the focus of most of your dog’s attention for about a week or so. After this passes, your dog will pretty much lose interest and become used to the parakeet’s presence in the house. The point at which this disinterest takes over will vary from dog to dog, but most well trained dogs will soon get the message that they must leave the bird alone. 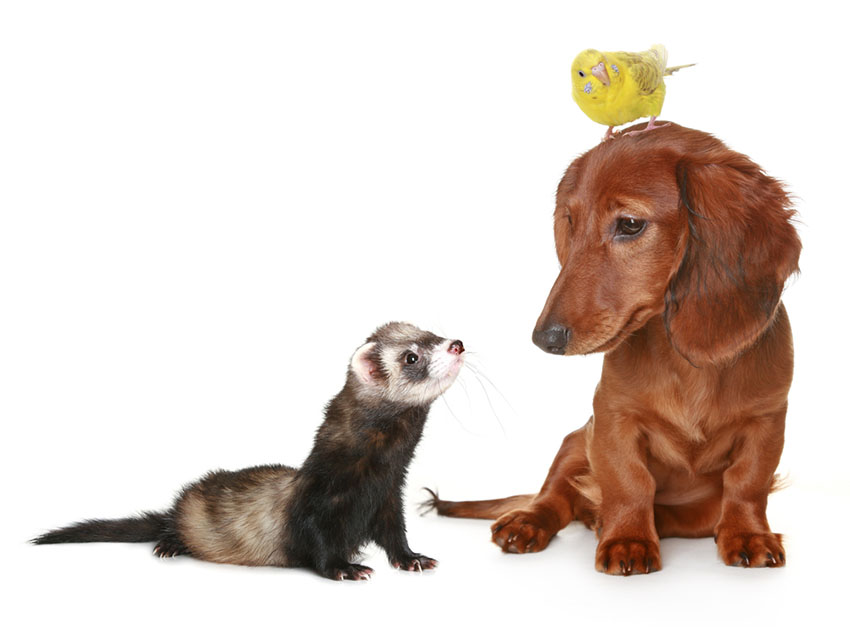 Parakeets can become friends with dogs - not with ferrets, though!


If your dog happens to be well-behaved and not knocking the cage, your bird will soon get used to them and simply view them as another part of the room. The bird’s ability to just totally ignore a large, barking animal can be surprising, and usually it is your dog that will be getting the most excited. If you’re bringing a dog into the household after the parakeet has already been living with you for a while, the bird will be even more placid and view the new-comer as just another addition to the house and will remain rather indifferent to them.

It is indeed possible to take this passive parakeet/dog relationship to the next step by allowing the two animals to interact when the bird is outside the cage. This passive attitude towards each other will not happen immediately though, and even if your dog is used to the bird in the cage, a flying, squawking bird is a very different scenario and your dog's natural instinct will be to chase and bite.

Many dog breeds will be unable to learn that your parakeet is anything other than prey. For example, Jack Russells and other terriers have been bred to find and kill small animals. You can’t expect them to ignore centuries of selective breeding just because you happen to have a budgerigar at home.

The key to an out-of-cage relationship is always going to be the dog. If your dog is a non-hunting breed, extremely well trained and passive, you’ll be able to perch the parakeet on or near them without reaction, very much in the same way you can place a treat on the dog’s nose without them eating it, until you give the word of command. If your dog isn’t that well trained, don’t let them meet your parakeet face-to-face. Never allow your dogs to lick the bird, as parakeets are prone to catching diseases through other animal’s saliva (including humans).

Don’t let yourself be fooled by cute pictures of cats and parakeets you may find online. This is by no means a natural relationship, but rather the opposite. Cats, as you probably know, are natural hunters and very often enjoy catching small birds. Unless you have an extremely placid and friendly cat, these two animals are never going to get along.

Even a cuddly cat who spends most of the day curled up in your lap sleeping, will instinctively know that your feathered friend is an item of food, and will need to be trained to think otherwise. It’s slightly different with larger, more intimidating birds, but parakeets are unfortunately an ideal bite-sized snack. 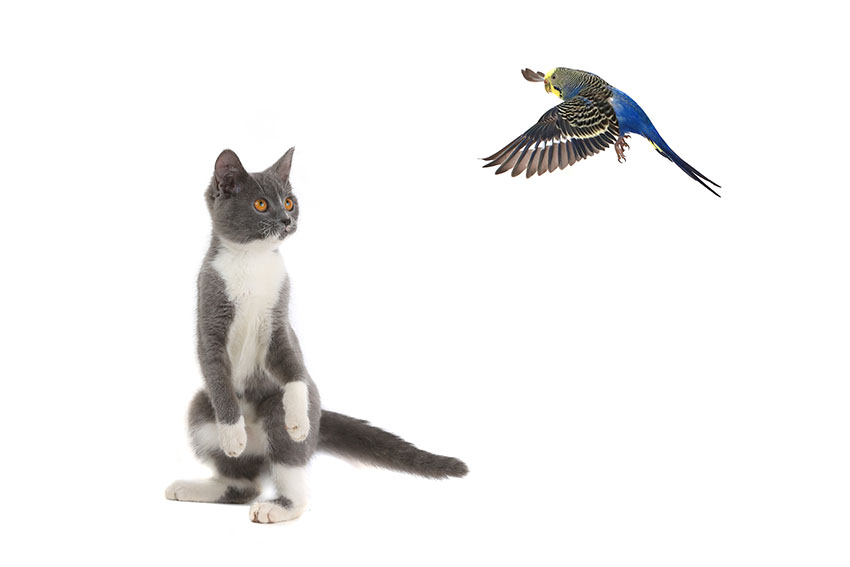 Parakeets and cats are not natural allies


If you are totally sure that your cat won’t enter killer mode -- only you can be the judge of this -- you can try introducing your bird via your finger. Make sure you are looking out for any signs that your cat may pounce and attack, and reprimand them with a firm “No!”, or whatever other word of dissuasion you use. Try not to shriek at your cat though, as this will make your parakeet scared. Allow your cat to sniff the bird. If the bird is on your finger, your cat eventually become to associate the bird with you and treat it with the same respect that they give to you.

You can never be fully in control of these situations. The parakeet may decide that now is a good time to fly from your finger, and the proximity of the cat’s fluffy head may entice your bird to hop aboard. A flapping bird may bring out the hunter instinct in your cat, so you really can’t afford to take your eye off the two for a moment. Some cats get it straight away and will treat the bird like any other member of the household. Even if this is the case, you should never leave the two animals alone and should always exercise a certain amount of vigilance.

If you have any doubts, don’t introduce the two. There is no need for your bird and cat to form a relationship. You can always keep your cat out of the room during free-flight sessions. This is, without a doubt, the safest option. There will always be a chance that your cat will make a sudden appearance, or someone might open the door and let the cat in, oblivious to the fact that your parakeet is enjoying some flight time. In situations like these, familiarity between the two animals could be a potential life-saver.

Parakeets and Puppies and Kittens

Young dogs and cats will want to play with your parakeets rather than kill it. Yet because of the size of a parakeet, a simple paw to the head can break the bird's neck, and simple scratches that would glance off other cats/dogs or larger parrots, could hurt a parakeet and lead to infection.

Unlike adult cats and dogs, puppies and kittens should not be allowed to interact with your birds outside the cage. The upside of this is that once your four-legged friends mature, they will be accustomed to the bird and you should be able to introduce them beak to nose.

I’ve had 2 budgies for a year now and I’m with them at least once every day but they still won’t let u tame them even if we put our finger near the cage they willl go to the furthest Part of the cage!! Please help!! Also the other budgie is disabled when we got it it could fly well and stood upright and was playful but now she puts her head to the side alll the time and she won’t come out the cage or fly my dad thinks she’s broke a bone in her neck buts she’s 2 smalll to be taken to the vets!!! Please help ASAP!!!!!

I’m looking at getting a parakeet but I currently have dogs and cats. Would it be dangerous for the parakeet? I’m only looking at getting one because I want him/her to be bonded with me instead of another parakeet. If one bird would have to spend time alone I wouldn’t want to only get one if I do at all. Any suggestions? Thanks!

Hi I'm just wandering could I (the human) inadvertently pass or be a carrier of a parasite (if my budgies got them) and would it affect any other animals in the house ? Eg like dog, rabbits, cat etc. If that makes sense. I don't not keep my budgies near other animal just Incase it does occur as I had an incident a few years ago when my dog brought in rabbit fur mites and they were on me and I inadvertently passed them to my rabbits without knowing..... I hope you understand what I mean. I'd just like to ensure my other animals aren't at risk or the budgies? I appreciate any advice:)