Once your bird is finger trained and has mastered the art of the step-up, you can move on to some more complicated tricks. There is no actual need to do this, and failing to teach a parakeet hard tricks is in no way bad for their mental and physical health.

Training works better in a space with few distractions. Trying to train a parakeet in the room where his cage and all his toys are will be slightly harder.

The best way to get your bird to learn tricks is to start with very simple tricks, such as the stick trick, below. Only start teaching a new trick once you have mastered whatever you have taught them so far. .

Simple “tricks” can help reinforce the bond between you and your bird. Training sessions for these feats should be short, as anything vaguely stressful for your bird will not count as a lesson. Each of these following activities should be practiced for no more than 3-4 minutes per session. You cannot teach parakeets things that they don’t want to do.

For this trick you should choose a moment when the parakeet is perched comfortably outside the cage - on top of the cage or on your finger, for example. Take a twig, stick or piece of dowelling (the sort of thing you use for a parakeet pech) and show it to them at a close range. It won’t take your birds long for them to realise that this stick poses no threat. Once they are happy with its proximity, gently tap them on the beak with the end of this stick and use a chosen command.. This command should be something like “peck the stick” or something unique for this trick. This might take a few tries, but as soon as your bird bites the stick, give them a treat. In no time at all they will bite the stick as soon as you present it and say the “magic-word”. 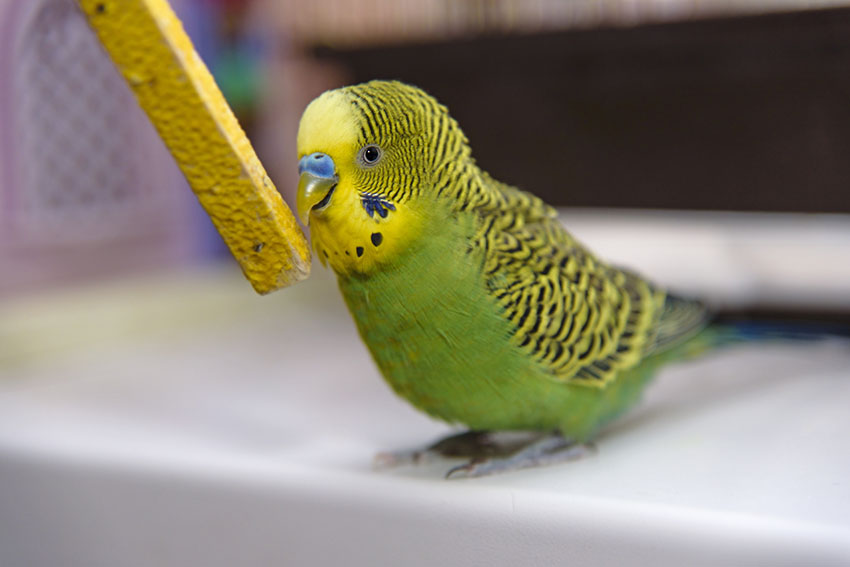 A parakeet with a simple stick toy


This trick isn’t exactly a show-stopper, but it does help get the parakeet used to the idea that interacting with you on new action brings rewards. Taking that concept forward, you can begin making the tricks more complicated.

Set up a parakeet sized ladder outside the cage. Get the parakeet to perch on your finger, and then place them at the foot of the ladder. Present some millet at the top of the ladder to coax them to climb up to the top. Pair this with the word or phrase you have chosen for this particular trick. It’s natural for these birds to climb so this trick should come pretty naturally. Once your bird has cracked it, start putting them further and further from the ladder. Eventually your parakeet should be climbing ladders as soon as you utter the magic words.

This ladder trick can be taken to another level. By slowly putting further gentle challenges at the top of the ladder, you can eventually get your bird performing entire routines. For example, you could have a stick or plastic slide running back down to ground level. Use the millet again to make your bird descend back down to ground level, and say something like “down the slide” when they peck at this new obstacle. If they try to bypass this by flying down, simply remove the treat and say nothing. Place them at the foot of the ladder and start the process again. In no time your bird should get the hang of it and do it every time. You can lengthen the stick or slide (a length of toy car track is ideal for this).


The ladder and slide tricks can be elaborated on by making your own DIY climbing frames. The came principles apply -- use commands to get your bird up and down. Once the routine is finished you can top it off by getting them to hop onto your shoulder or hand.

One of a parakeets favorite pastimes is pushing balls along the ground with their beaks. You can use this natural instinct for another trick. Try setting up a ramp and get your bird to push the ball up it.

This trick is very easy for your bird to master, as it will instinctively try to head-off any ball that comes rolling towards them. Place a miniature goalmouth behind them and gently flick the ball towards them. They will save the ball with their beaks, each time they do this say something like “good save”, or something equally appropriate. 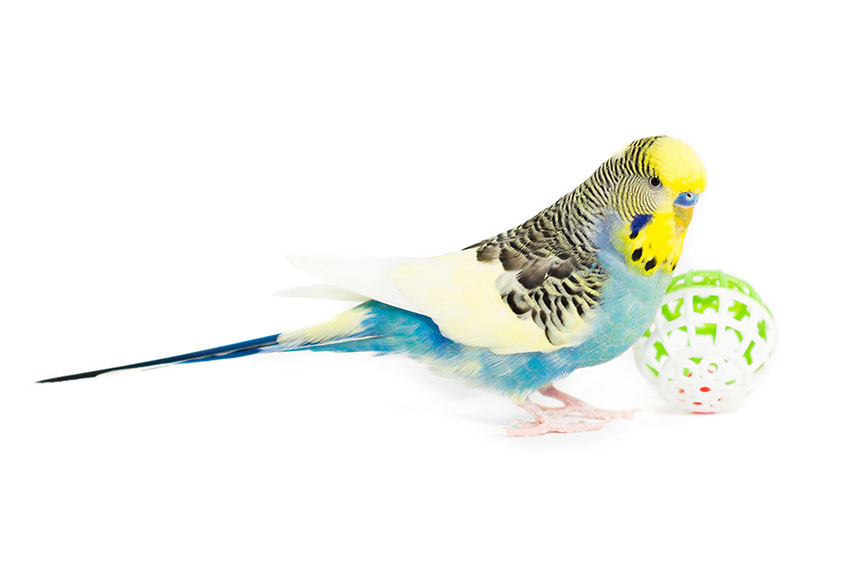 
You can combine this goalkeeping with your bird's natural instinct for ball-rolling. During these little floor-based ball-rolling sessions, place a little goal in front of them and everytime they get the ball in the net, say goal and offer some millet as a reward. USing two net posts you can have them goalkeeping at one end and scoring at the other.

Initially, your parakeet may think that a tennis ball is too large to roll around, and they won’t automatically start nudging it like they would with smaller balls. Place them on the ground near the ball, and gently roll the ball so that it taps their beak, controlling its motion with your hand. Once your bird gives the ball a shove with its beak, use your command (for example “push”). Once this phase of the trick has been mastered, you can move onto the second part. Get the bird onto your finger, and then place them on top of a stationary ball, using a command such as “on top”. Use millet to help encourage them. Once they’ve mastered both you can combine the two parts, let them push for a few seconds then have them hop on top. 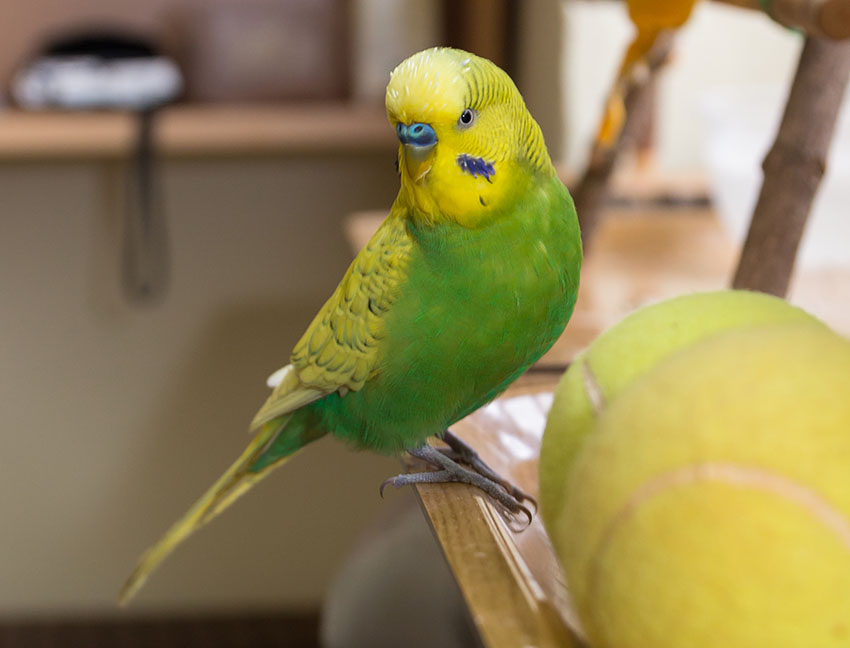 The aim of this trick is to have your parakeet be able to navigate a short tunnel. A toilet roll or kitchen paper tube is ideal for this. Whilst tunneling is not natural for these birds, the trick does appeal their curiosity in exploring potential nesting holes.

For this trick you’ll have to start slow. Using a plastic ring, or piece of paper with a hole cut in it. Start with a wide hole, and reduce them as your bird becomes more and more comfortable with this idea. Lure them through this hole, once again using a specific command. Once this has been successfully done a few times, you can start to lengthen the tunnel -- use small sections of the kitchen roll tube, increase the length gradually. You can tell when to lengthen the tunnel based on the bird's enthusiasm to climb through the smaller version. Once you’ve gone through all this you can finally pull off the final version of this trick. Place some millet at the end of the tube, say the magi words and your bird should gladly scramble through the hole. 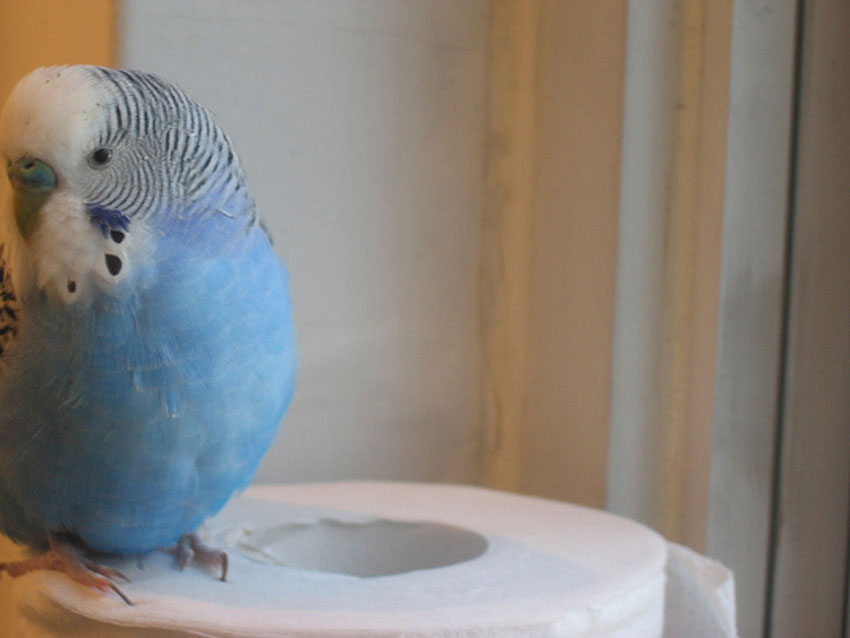 
Once your bird is fully comfortable with this, you can start to introduce some bends to this tunnel. Nothing too narrow though, as this will cause the parrots to panic. The idea is to get them walk through a tunnel, not to start pot-holing.

This is a great bonding game, but it does take some time to master. The idea is that your bird will react when you say “fetch!” by picking up an object, bringing it to you and dropping it in your hand. Sounds complicated, right? But don’t worry, with just a little time and perseverance, you and your bird will be playing fetch together! 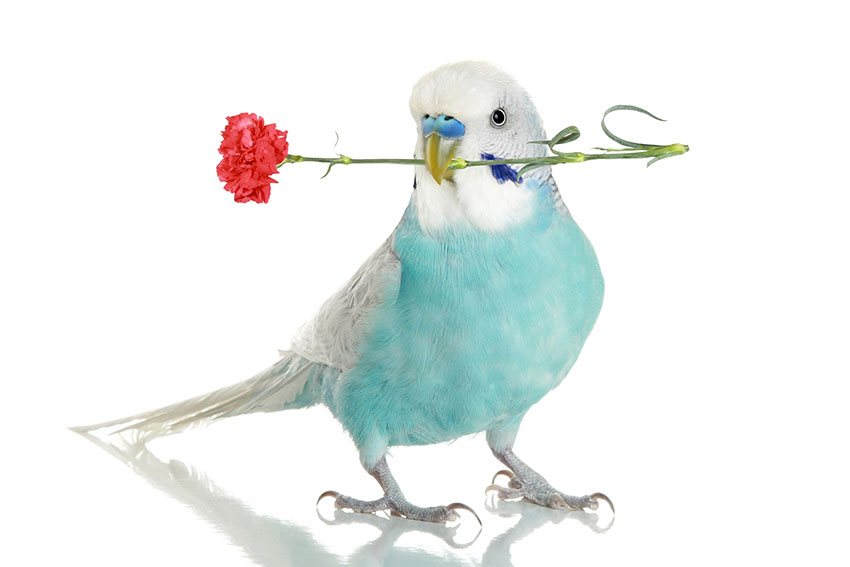 Playing fetch with a parakeet

The first step in this trick is actually getting your hands on a parakeet sized skateboard. Try looking for one in your local pet store, if you can’t find one here you can have a look online or even try bullying your own one out of something like Lego. Parakeets enjoy the sensation of movement, this can be seen when they use their cage swing. This instinct stems from their habit of clinging to waving twigs or stems of grass. Despite this is still takes time for a parakeet to get the hang of a skateboard.

You’ll want to start off by moving the bird from your finger to the skateboard, and then giving the board a gentle push. Once you’ve got the board moving, try positioning your parakeet by putting one foot on the board and the other on the floor. The parakeet's natural walking instinct will propel the skateboard. This trick will, of course, take time, but persevere and you’ll both get there.

This trick is simpler than it may sound. The parakeet will be “waving” it’s foot rather than its wing. This trick is based upon the step-up training mentioned above. Start off by offering your finger to the bird as if inviting them to perform a normal step-up, but withdraw the finger and leave the parakeet with their leg lifted. Give them a treat and say “wave!”. Repeat this as many times as you can before your bird inevitably loses interest. They will eventually come to associate the word with the lifting of their foot and the treat that follows.

What do I do when the budgie steps on my finger to fast for me to give it a treat and do I need a clicker for any of these tricks?

My budgie turns a somersault on her swing when I tell her to. She does it for the applause from Mommy!

Just got kakariki he’s beautiful and very clever .can I train as a budgie ,