Parakeets can fall victim to external and internal parasites. Some of these, such as ticks, will be easy to spot when handling the bird. Others, like mites for example, can only be spotted when the bird starts being affected by them, i.e. feather loss. Others may be living inside your bird and will only be identifiable after the bird has started showing some symptoms.

An infestation of red mites (Dermanyssus gallinae) will cause your parakeet great discomfort. These little creatures are very hard to spot with the naked eye. They reach a size of 1mm (0.04 inches) max, and are nocturnal, which means they’ll only attack the birds during the night. In very severe infestations, the parakeet may lose too much blood, which in turn will weaken their immune system, exposing them to all kinds of disease.

Due to their size and the fact they’re nocturnal, these Red Mites are very hard to spot. One way of checking for them is to put some double-sided tape into all the nooks and crannies of the cage. The mites will get stuck to this tape. Once you’ve confirmed the presence of these mites, you need to clean out the cage thoroughly with hot water and a scrubbing brush, and keep checking and cleaning over the next few days.

Scaly face is caused by the tiny skin-burrowing mite Knemidokoptes pilae.It usually affects the bird’s cere and beak, but can also cause problems in the legs and vent area. The first sign of this problem will be constant scratching, the parakeet will rub itself on any object it can find. After this a crusty growth will appear on the cere, and the beak will become misshapen as the mites burrow inside. Initially some facial feathers may be lost, if this condition is untreated then you run the risk of the affected body parts actually dropping off, leading to sever handicap.

You need to step in before the problem becomes this extreme stage. A trip to the vet is necessary - the parakeet will be prescribed a medicated swab for treating the mites. 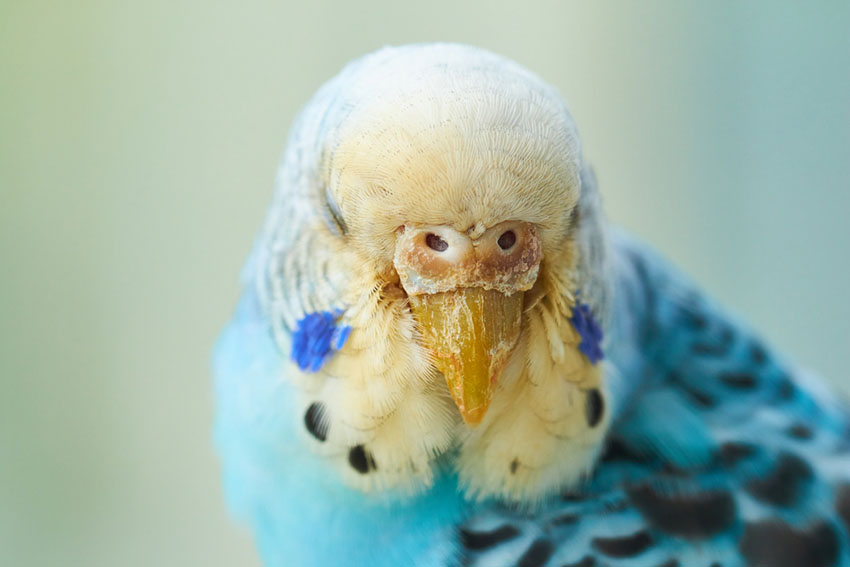 This female parakeet has an infestation of scaly face mites

This is caused by Knemidokoptes mutans, closely related to the scaly face mite. The parakeet's legs will swell and begin to flake, which causes pain. The condition is usually treated with medical paraffin, but speak to a vet before using it.

These feather-eating pests (Mallophaga) are rare in parakeets, but birds in an aviary can catch them from wild birds. Lice are easier to spot than mites, growing up to 3mm (just over a tenth of an inch) long; but they can still hide easily among feathers. The first sign of their presence is usually the bird's symptoms, which consist of violent scratching, feather-shaking every few minutes, and, eventually, a sorry-looking, bedraggled appearance, as the lice eat their host’s coat at its roots.

A vet will prescribe a contact chemical to treat the problem. Unfortunately, if one of your birds has them, the whole flock probably has them too. 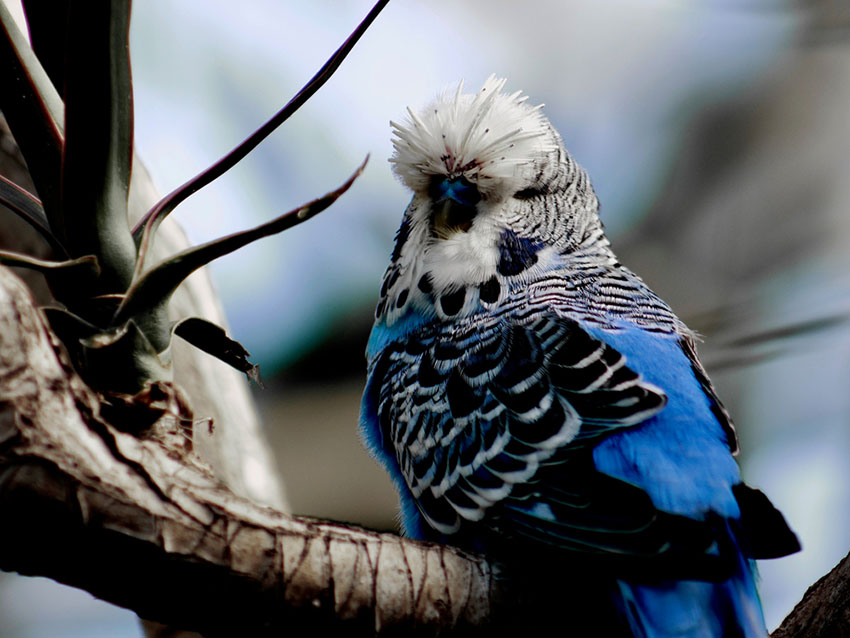 Infested parakeets will soon recover their good looks after treatment

Parakeets can become infected with Ascaris roundworm. These creatures live and breed in animals’ guts, and their eggs are passed on via droppings. The adult worms can grow 3.5cm (0.014 inches) long, which in a bird as small as a parakeet is a real problem. Several worms in a parakeet’s gut can steal all the nutrients from its diet, causing malnutrition. paralysis and death - although more often the symptoms are weight loss and lethargy.

A vet will prescribe a medicine that flushes the worms from the parakeet’s system. If successful, you will spot the adult creatures in the bird’s droppings. The treatment will need repeating a few weeks later to catch the worms that survived as larvae in the parakeet’s gut.

Ringworm is a particular problem in outdoor aviaries, where droppings fall to the earth – a perfect habitat for the worm eggs.

Parakeets, along with many other birds, have an internal organ called an air sac, part of their respiratory system. This is sometimes invaded by a tiny creature called the air sac mite. It also colonises the bird’s trachea (the breathing pipe between the throat and the lungs). An infestation will affect the parakeet’s voice. He will stop chirruping, his whistles will sound hoarse, and he will start to make a clicking, wheezing sound when he breathes. If left untreated the bird will eventually suffocate.

Our budgie is about 12 months old and has strange looking feet with very long claws. His beak is also scaly looking. I went to trim his nails and one of them broke off so I stopped. We have another budgie in the cage and her feet and bake a perfectly healthy. Any ideas what’s going on with our little man.

Hi Betty, Our bird is going through itching, scratching and plucking so I have done some research (not an expert). From what I have learned Ivermectin can be used against parasites and worms. There are several forms of parasites like Mites which could be causing the itchy plucking stuff so I am guessing that is why they are giving your friend that medicine. From what I have read if used properly works pretty well. A quick call to your Vet should also clear up what they are treating him for. Hope your bird gets better. Greg

@Joyce - We are going through the same thing with our Budgie and we still do not have a solution yet. Here a list of what we have done so far: 1. Took him to the vet. Check said all was ok (no mites, parasites, etc.) but then it got worse to the point of bleeding. 2. Fine spray of Pure liquid Aloe Vera (Bio and drinkable solution) mixed with warm water (50:50) 3. Humidifier nearby (our room humidity is very low. 4. Changing foods - We have been trying different greens, millet, seeds, etc. since we got them (two budgies). The idea is the possibility of an allergic reaction. 5. Bath available every day if they choose (it is in the cage, chaning the water daily). 6. Vitamin Supplements mixed in a different seed then we were using before. What I still want to try: 1. Vet appointment tomorrow. 2. Vitamin A is supposed to be good for birds skin and such itchiness (drops on order) 3. Still looking for further ideas in Internet everywhere Our bird has been very healthy, happy, singing and looks great. Only a year old and has a nice partner that treats him well (well, most of the time..). If we can just solve the itchy part things would be perfect.... Hope this helps somehow. The VET is probably the most important thing. Kindest, Greg

my parrot tore a feather from the wing of the bigger one and there is blood in that place, and it itches a lot, 1 ivermectin was put on it and tomorrow again, what could be the problem?

Just purchased my parakeet about three months ago after a week of having the bird he started plucking himself and pulling out the white feathers on his body. Now that’s all he does and there’s white feathers all over the place and he seems to be going crazy itching himself. I don’t know what to do for him. And he help I would appreciate it thank you Joyce