Breeders classify their birds according to color and variety, rather than breed. The color describes the general plumage of the parakeet, and the variety refers to the pattern and/or color of its markings (see the Parakeet Varieties section of this guide).

There are two sets of colors that distinguish the two broad groupings of parakeet, green/yellow and blue/white. The underlying hue of your parakeet is most visible on the mask (the area of the face between crown and throat). 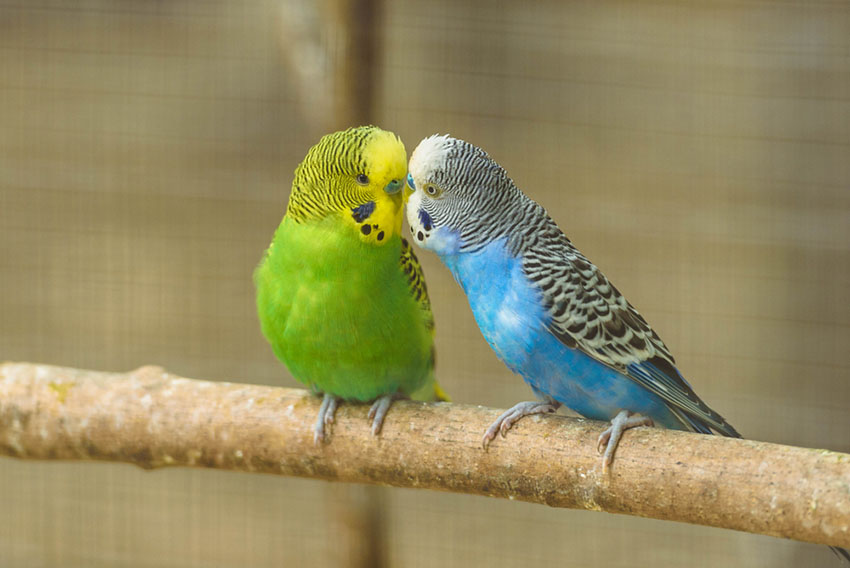 The two basic parakeet color types are green and blue


The wild ancestral budgerigar sports a full coat of green-yellow plumage. This combination is very common in pet parakeets, as is the blue/white combination. The latter can come in many shades varying from grey to cobalt.

All stemming from the original wild budgerigar, there are now over 30 recognized color combinations amongst domestic parakeets. These birds are not one-offs, but have been selectively bred to produce these vibrant new colors.

These different colors aren’t limited to captive-bred birds-it occurs in the wild just as readily, thanks to genetic mutations. Unfortunately this color mutation isn’t very helpful in the wild and most of the time colored parakeets will be ignored by females, who prefer the classic green-yellow coloring.

However, in captivity breeders can isolate a parakeet with a color mutation and breed it with similarly colored birds to create a flock of that particular type. From there the possibilities are endless, and from the thirty-odd basic color schemes, there can be dozens of variations.

There are many color variations in pet parakeets, all of which are based on a basic color palette of yellow and blue pigments. Blue mixed with yellow results in green, and this is the dominant color of wild budgerigars. However, in many domestic varieties, the yellow pigment is absent and the blue shows through a white (rather than yellow) base. Add some black to the mix, and there's scope for almost endless variety.

The one thing you will never find in your pet parakeet is red pigmentation. Any pinky tinges they may have will always be due to diet (the same way flamingos are pink due to the shrimp they eat). Yet this lack of red in the parakeet color palette has not prevented an amazing assortment of variations, ranging from smokey greys to azure blues, and pastel greens to mustard yellows. As with any other animal species, parakeets can also be born without the usual pigmentation in them, resulting in albinos. 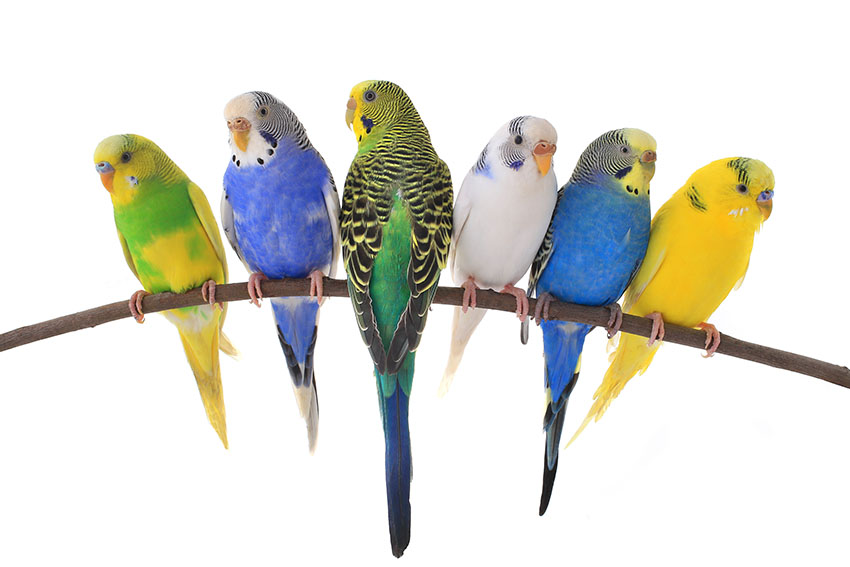 Parakeets come in many colour varieties


The dark pigment – the one that turns the yellows green and splashes blue across the white – is a form of melanin called eumelanin. The yellow pigment is psittacofulvin, mercifully shortened to psittacin.

The color palette can be enriched by the presence of genes that influence the shade or intensity of color, or that alter some of the birds’ markings.

One of these genes darkens the color of the parakeets plumage. The extent of the darkening is based on the amount of genes present in birds (i.e. two, one or zero). This dark factor gene tends to be absent in the wild budgerigar, whose coloring is referred to as Light Green. If one dark factor gene is present, the parakeet becomes a Dark Green, and if two are present then the bird is referred to as Olive. The equivalent in blue/white parakeets are 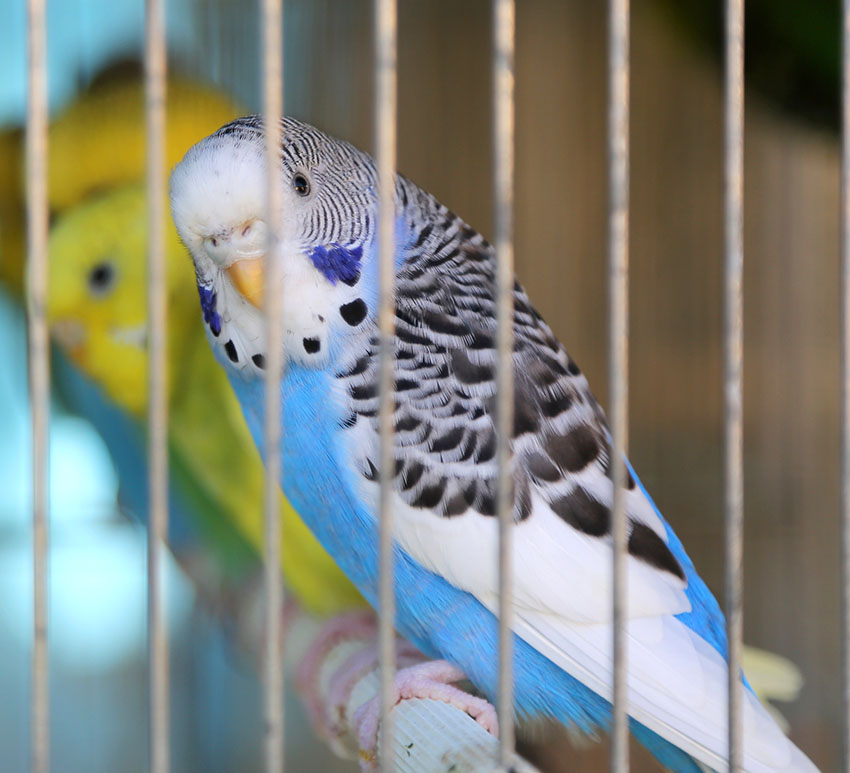 
The color scheme can be changed up in other, exciting ways too. The grey factor gene brings a beautiful grey wash to the birds feathers, making green birds green-grey and making blue birds a lovely smokey shade. Violet factor deepens and darkens the colors in both groups of birds, sometimes resulting in an amazing purple effect. Slate factor, a very rare gene, leads blue-grey slate darkness to the plumage.

The color of a chick depends on its parents. Dominant genes, such as the one responsible for the yellow/green in wild budgerigars, will always dictate the offspring’s color if passed on. Domesticated parakeets come in so many colors that it is hard to say exactly what the chicks will look like. .

For example, a bird can carry a recessive gene for white/blue feathers, hidden behind the dominant yellow/green feathers. This blue won’t show up in the bird itself but it can be passed onto its offspring. So it is totally possible for two yellow/green birds to have a blue/white chick, if they are both carrying the hidden gene. 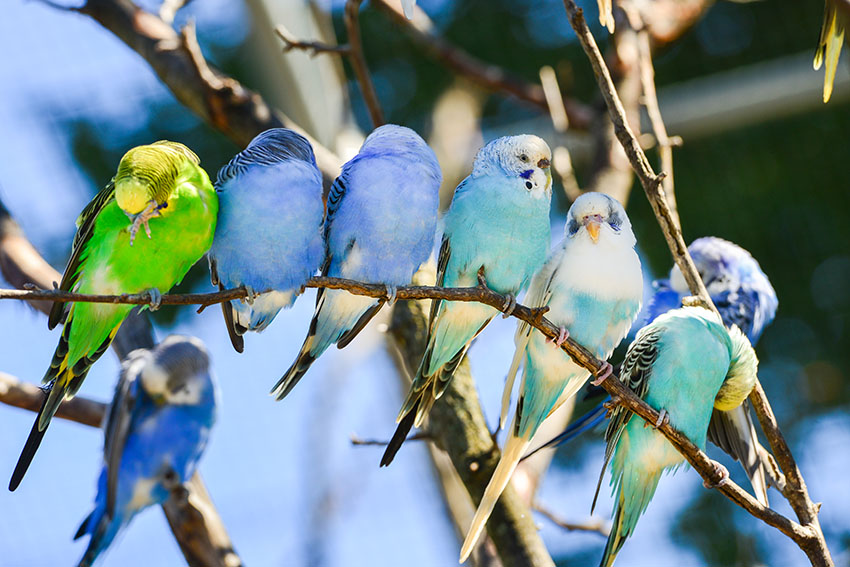 
All non-light green bird types (ones that don’t have the same plumage as wild ones) are the result of a genetic mutation. The commonest variant, the blue/white parakeet, has simply lost it’s yellow pigmentation. Other genetic mutations can lead to many more color variations from bird to bird. Markings or feather colours can become lighter or darker, and some features can disappear all together!

Birds can carry either one or two of the same mutant gene. If two are p[resent then the result is further enhanced markings or colors. Two mutant genes can combine to produce truly beautiful effects, such as the Yellowface and Dominant Pied. Both of which are mentioned in the Parakeet Markings section below.

The secret of a parakeet’s colour, then, lies in its parents’ genes. Breeders know that when they put two Light greens together, there is a 99.9% chance (barring random gene mutations) that the offspring will be Light greens. Likewise, a Light green and Skyblue cross will also produce a Light green, as that is the dominant gene. The next generation, however, inheriting two colour-coding genes each, shuffles the genetic pack a bit more. Some of those recessive Skyblue genes will have been passed on, and wherever two combine in an individual bird, that will be the colour its plumage assumes.

Most parakeet breeders carefully choose parent birds in an effort to produce the perfect bird. Others, however, enjoy the potluck of random breeding. Most are perfectly happy with raising a healthy chick, regardless of coloration or markings.

Very occasionally, a new mutation will produce something never seen before, such as the Blackface parakeets that appeared and disappeared in the 1990s. 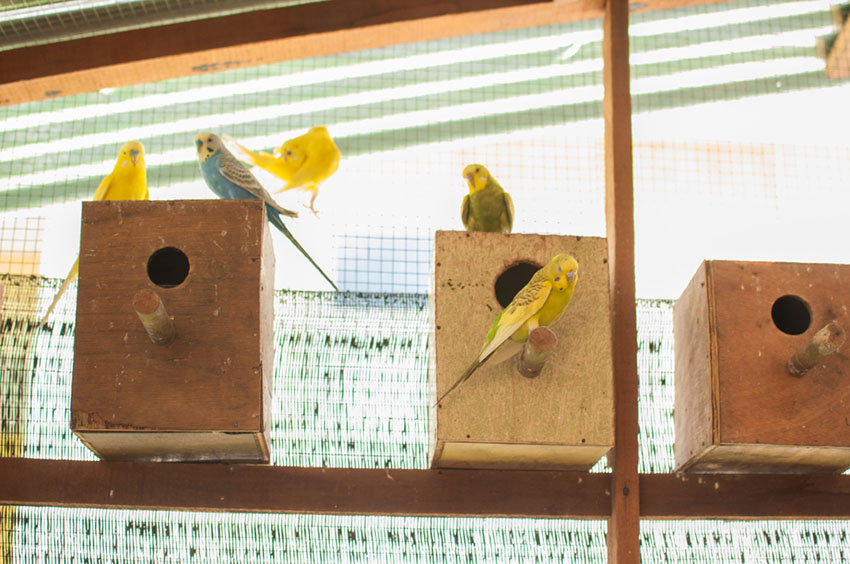 Contrasting colors in the parakeet aviary

If you notice that your parakeets plumage has changed during its growth into adulthood, it is usually a sign of a deficiency in the diet. For example, if your bird is on an all-seed diet, then it is very possible that they’re lacking in vitamin A. Make sure to feed your birds well and the problem should solve itself.

Another cause may be lack of cleanliness. If a parakeet doesn't regularly preen - i.e. clean it’s feathers - it will soon look faded, dusty and generally a mess. Make sure to provide your pet with water so that they can take a bath whenever they please. Parakeets clean each feather individually, using an oil gland on their rump which helps give them a healthy, waterproof, oily sheen.

If your parakeet is being bullied, plagued by parasites, or is ill for any other reason, its colors may look duller or dirtier than usual. Prevention and cure are the answer (see the Parakeet Health section of this guide.)

The only parakeet type that actually changes color over the months as it moults is the Opaline, mentioned in the Pied Parakeets section below. 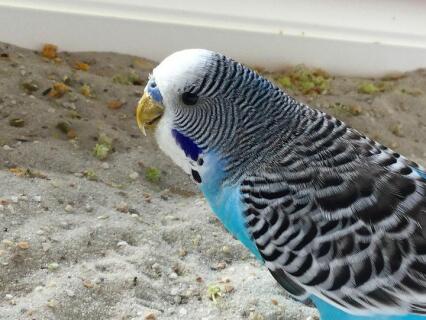 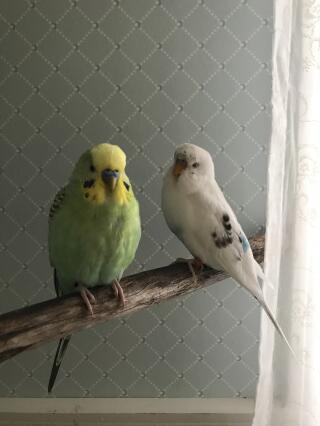 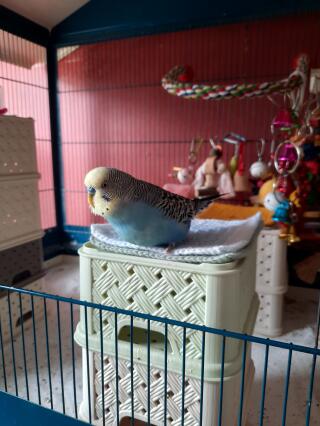 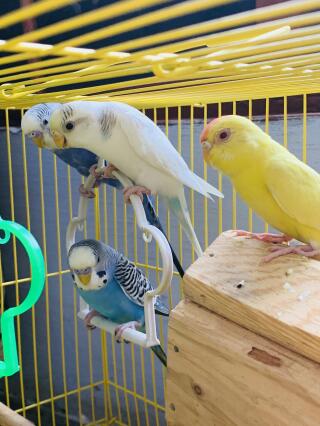 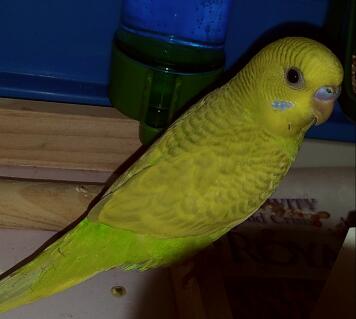 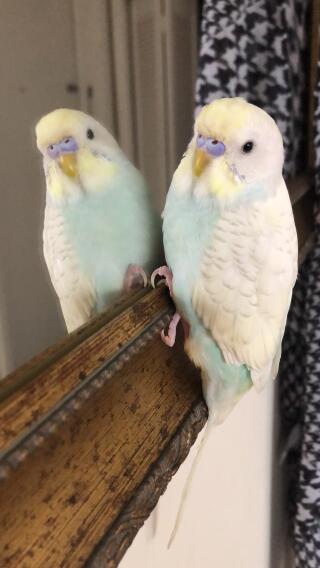 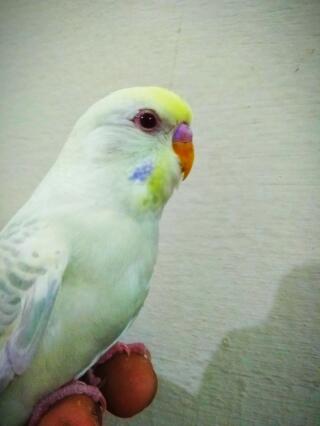 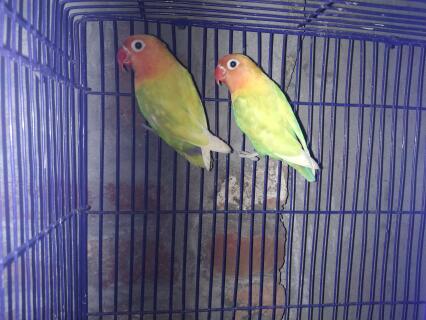 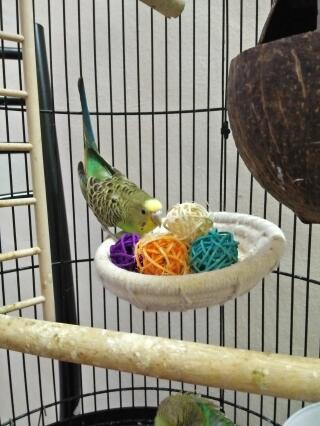 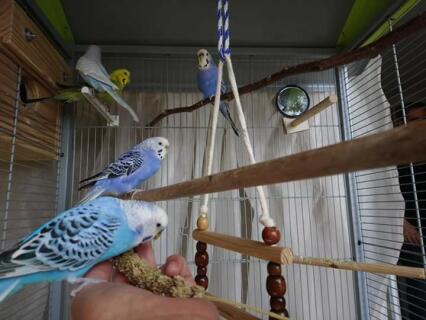 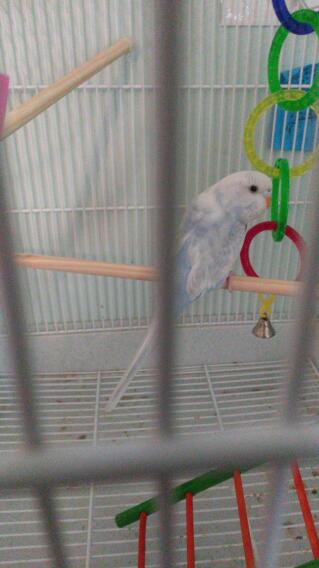 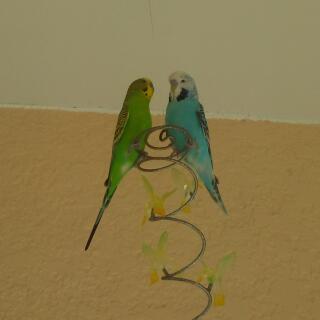 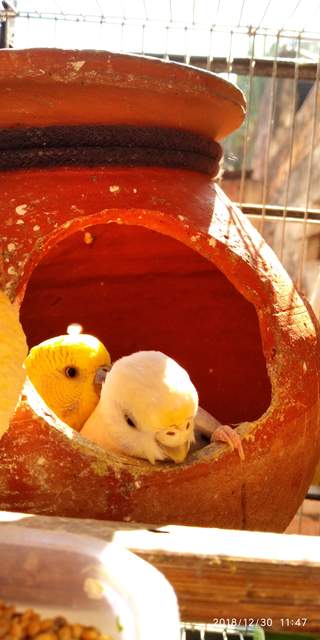 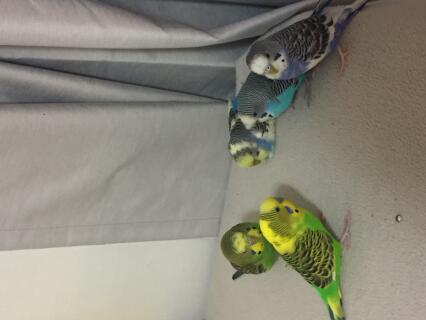 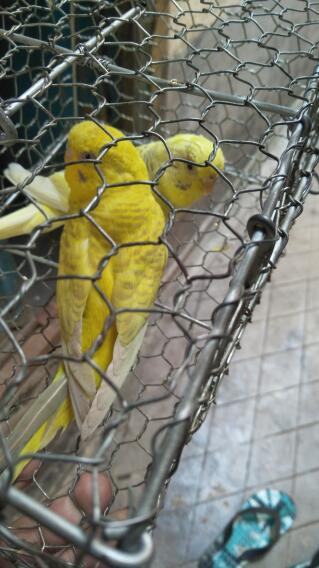 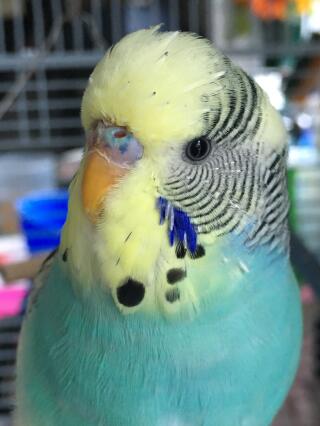 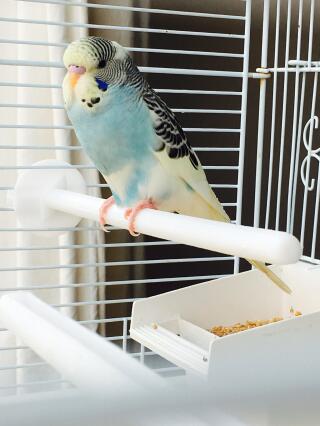 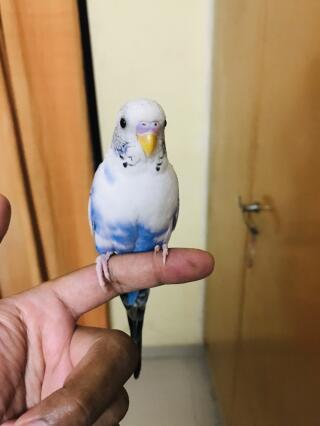 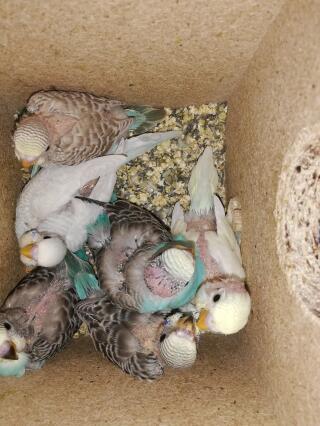 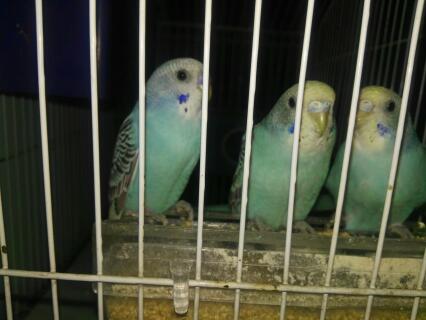 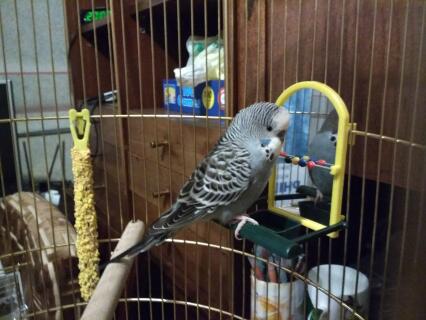 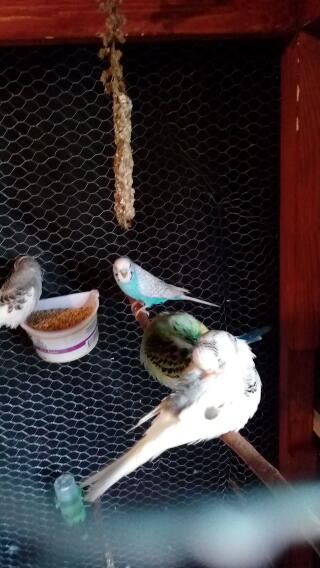 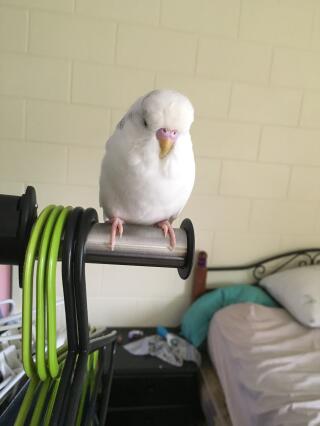 I have started to breed budgies and would like to know what they are called like receive pieds ect and all the different colours.

does anyone know if they are easy to train and do they make good pets? thanks

@ Sherry, not only is incest gross, it is genetically unsafe in all species

I have a brother and sister parakeet and am wondering if it is OK to breed them? They are a bonded pair and love each other.

I have a young budgie that’s got a pale yellow head and back and a powder blue body, he has no banding or black on him at all. Do ya know what colour he would be called?? Thanks for your help. Nina