Just because a parrot has a random tuft of different colored feathers, it does not make it a variety. To qualify for this tag, the particular markings, or plumage pattern have to be locked in the genes, with the ability to be passed on to the next generation.

There are two broad categories used to group parakeets that differ from the standard.green/yellow and blue/white types. Opaline and Spangle

Opaline parakeets are the most common of these two variants. Birds of this variety have less barring on the head, shoulders and back than standard birds. The barring can even be absent altogether. The general body color is also present in the wing feathers of an Opaline bird (i.e. a green/yellow bird usually has black and yellow feathers, but in an opaline bird these feathers are black and green;while a blue/white bird, which tend to have black and white, will instead have blue and white). Opaline parakeets also usually have brighter pastel colors. 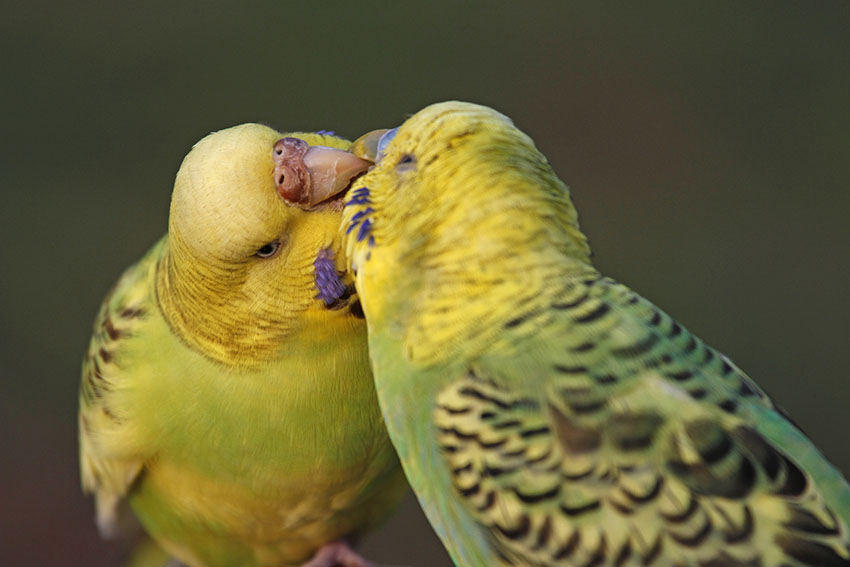 A beautiful pair of Opaline parakeets

The pattern of wing markings and throat spots on these birds is what makes them distinct. Most parakeets have black wing feathers mixed with their underlying body color (yellow or white);but if a parakeet carries one Spangle gene, these colors will be reversed (i.e. yellow feathers edged with black). Spangle parakeets have fewer throat spots than other birds, sometimes they have none at all. The few spots they do have usually resemble mini “targets”, with a white dot in the center. Parakeets with two Spangle genes are mainly one color-yellow or white-sometimes with other tones subtly sneaking through the plumage. 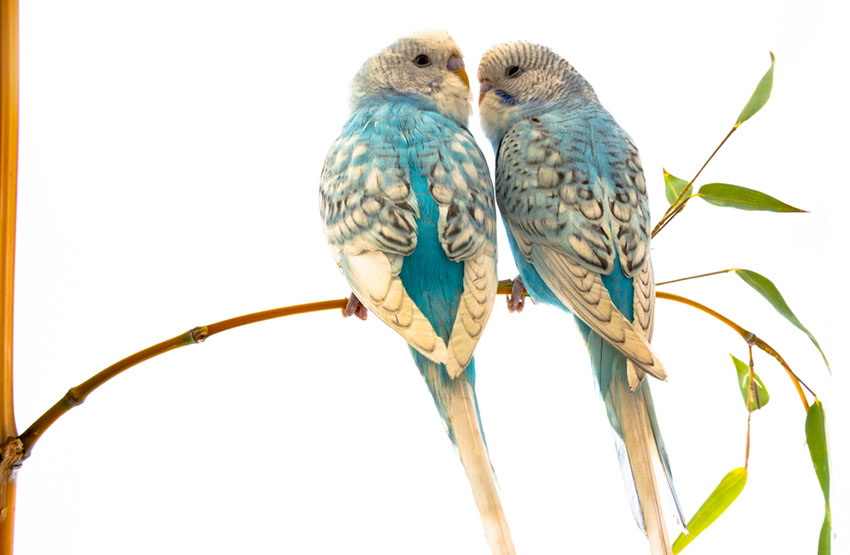 Yellowfaces make the otherwise simple blue/white and yellow/green divide slightly more complicated.They are blue type birds which sport yellow faces rather than white. In the handily named Yellowface1, the yellow pigment is confined to the face, wing edges and tail,with a little more spilling down the blue chest turning it into a slight green.

Yellowface 2 is more...yellow. The color on these birds has “leaked” so far down the bird’s body that it turns the bird a striking sea green, with only a few blue bits remaining untouched. They will, however, keep their blue cheek patches. 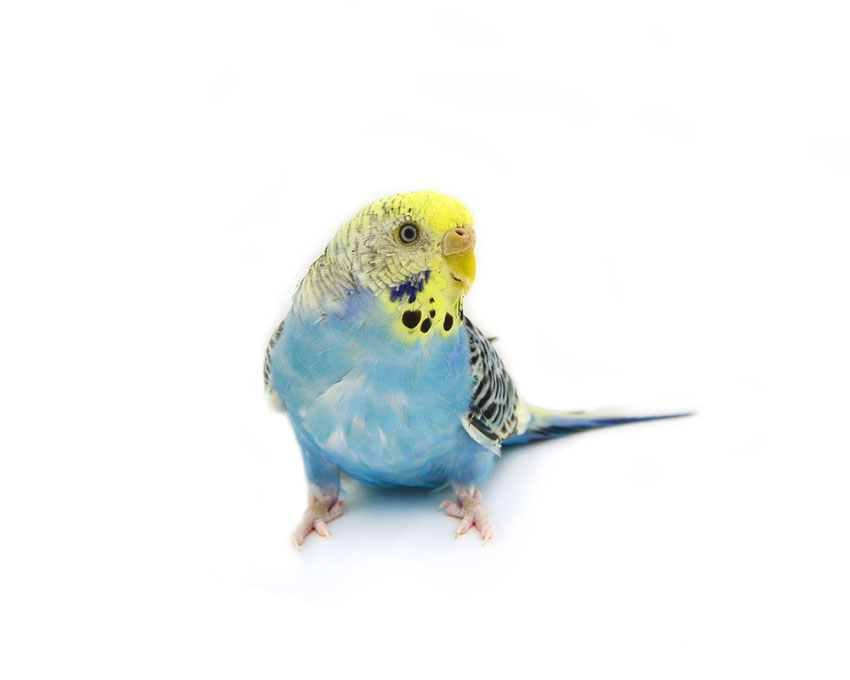 Best of both worlds - a young Yellowface parakeet


Goldenface parakeets have vibrant yellow faces and a load of yellow and green plumage in what is still an unmistakable blue budgie.

These birds come in two different types, the Texas and the Easley, which is also sometimes referred to as the Laced. These birds are pretty much white or yellow, with the usual black barring pattern on the wings, but with pale grey primary feathers. They can also have certain overtones of color, depending on their ancestry (i.e. green, blue or grey). The Texas has more color in the body and rocks a violet cheek patch whilst Easleys look much more two-tone, with silver-grey cheek patches.

The term “English Budgie” is recognized all across the world. These birds are commonly bred for bird shows, and are sometimes referred to as “Exhibition” or “Show” parakeets. These birds are much larger than their wild counterparts, and look much bulkier thanks to their thicker head feathers, which can sometimes fluff up and almost completely conceal the birds beak.

English budgies tend to be placid and relatively easy to tame and handle. They also seem to actively seek out human contact more than their wilder cousins, and almost never use their beaks aggressively. All of this is a result of selective breeding. After all, a small, wild and bitey bird won’t impress the judges!< 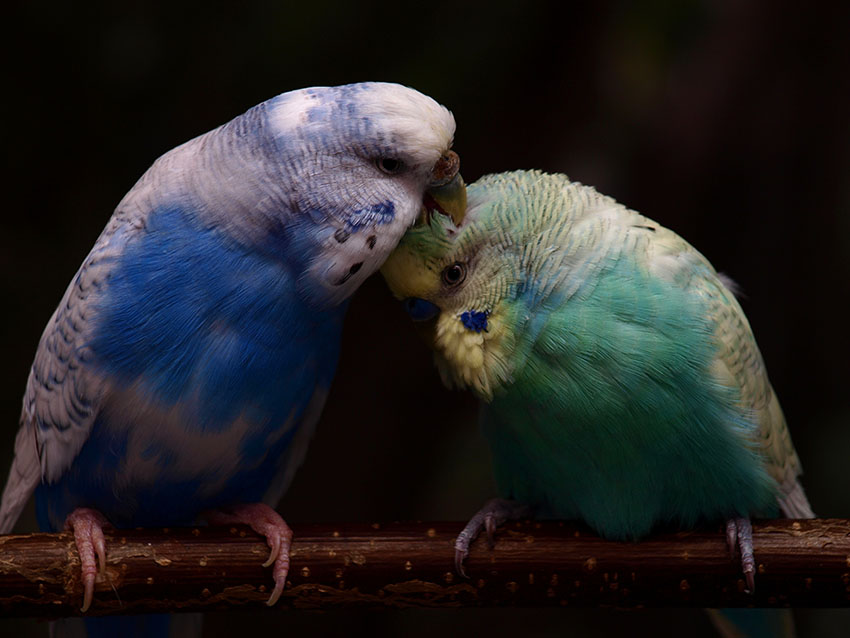 
If you have only ever owned an English budgie then you might not have noticed this, but they are actually much quieter than the smaller types. Their voices are less shrill, they have fewer squawking fits and have a laid back,musical air about them when compared to smaller parakeets’ constant chatter.

Excessive feather growth on the head is one of the features that was bred into “English” parakeets. Some varieties have tufts and crests that can completely obscure their faces, sometimes creating an odd “flower-face” effect. Unlike other animals (dogs for example), even the biggest, featheriest and fluffiest parakeet in the world does not suffer from any physical illnesses or discomfort caused directly from its outlandish appearance. The one exception is if the bird sufferers from a known syndrome, such as featherduster birds, which have stunted wings and a wild maze of overgrown feathers.

Crests are not only restricted to English-type birds. Like any other genetic mutation, it is a naturally occurring phenomenon and has cropped up wherever parakeets have been bred. Crests are formed by a group of feathers growing in the opposite direction, pointing outwards like a permanent outbreak of bed-head, rather than growing smoothly and close to the body.

There are three basic shapes to parakeet head crests--tufted, half-circular and full-circular. The tufted crest makes the parakeet look like an off-brand cockatiel, whilst the circular crests resemble more of a cheap perm.

The same mutation can make the feathers grow haphazardly elsewhere on the budgie's body, resulting in a messy coat of feathers that can look as if someone had glued them on without an instruction manual. Such birds are referred to as “frilled”. 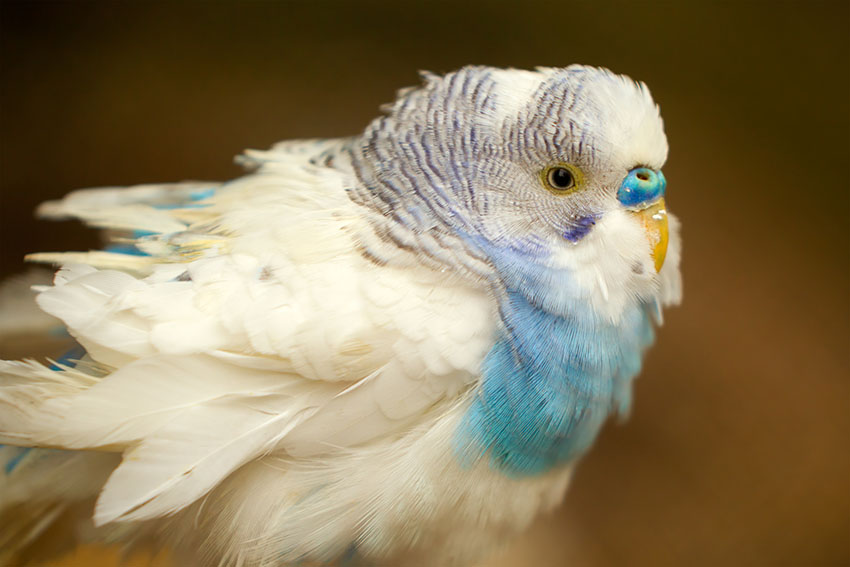 Very occasionally a new potential variety of budgerigar emerges from the gene pool. The most recent was the rather poorly named Blackface. These birds sported boldly striped heads and bodies, somewhat reminiscent of a zebra. These popped up in The Netherlands in the 1990’s, but shortly after disappeared after the entire population succumbed to disease. No doubt the mutation will one day reappear, hopefully this time with a better name.

Another rarity that pops up from time to time is the Brownwing. These birds are a member of the brown budgie tribe that, as the name may suggest, display brown markings without reduced body coloring.

These two have yet to settle into new varieties or types, but they are all examples of the diversity and resilience in the budgie gene pool. Although they may have disappeared for the time being, they will almost certainly pop up again sometime in the future.

There are other rarities in the parakeet race as well, such as the rather dull sounding Faded, a type of with the grey, washed out plumage mentioned in the Grey Parakeets section below, but only with a slight greying effect.

Anthracite parakeets boast a dark grey body and cheek patches, along with the classic black wing markings and long black tail feathers. They almost look as if someone had used a monochrome filter on the usual plumage. The mutation that creates this form is extremely rare. The current variety appeared in Germany in the 1990’s. Some experts believe that the now lost “English Grey” variety was genetically the same as the Anthracite.

The Saddleback variety is very similar to the Opaline (see above), yet these bird’s head markings are grey rather than the Opaline’s black. These birds also sport a stripe-free “saddle” between their shoulders, hence the name “Saddleback”. The usually black wing markings are also turned grey in this parakeet, gradually turning darker further down the wing. Saddlebacks also lack the “reverse” wing color of the Opaline. 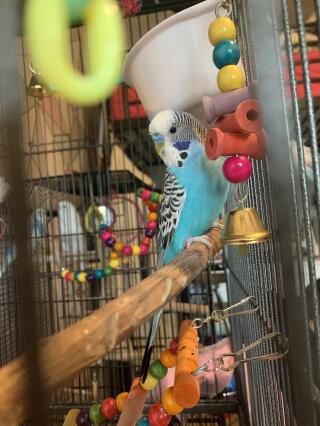 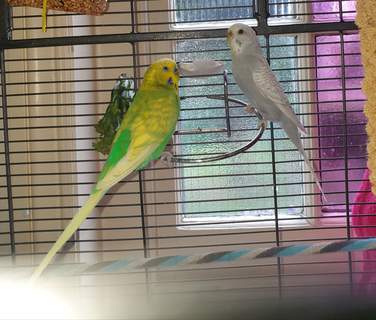 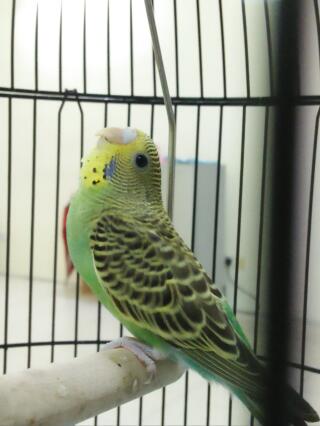 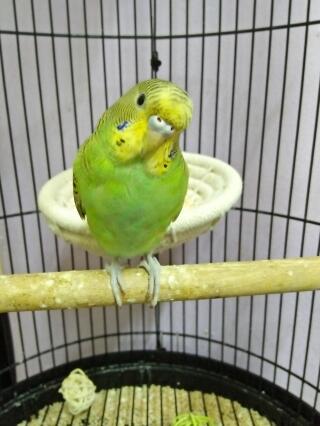 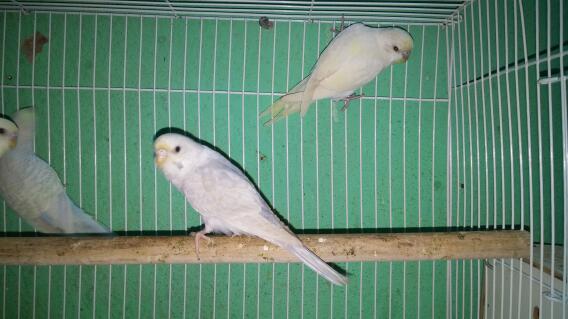 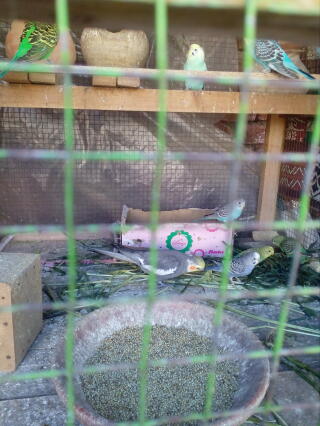 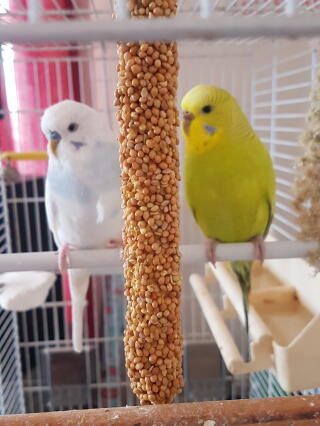 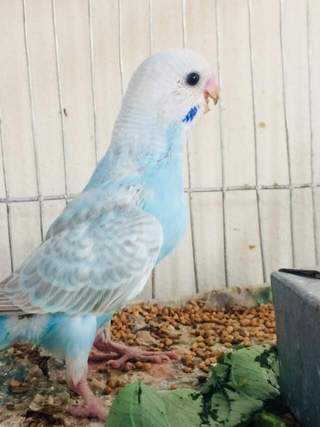 My budgie is white from head to tail, with very light blue patches on her rump and belly, and light gray patterns across her wings and tail, and I think across her back as well, and her eyes are black. Her cere and feet are light pink/tan. Any ideas?

How rare are the yellow/golden faced parakeets?

I saw a "blackfaced" budgie in a lot offered for sale at the bird market. They were tiny budgies about forty in a cage (poor things) one stood out quite dramaticaly. It had those bold zebra stripes all over it, it was overall quite a dark bird and lacked any other colour, kind of monochrome but very attractively different, almost hynotic. I was facinated and wanted to purchase it but as I had to leave the next morning and didn't want to get a new bird to be left with the house keeper decided not to. I thought about it for ages, though. I kept going back, the seller was getting curious and i expect the price was begining to rise, but he was'nt sure what I was looking at exactly. When I got back from my trip the whole cage was gone already, think someone bought the whole flock. They weren't exactly remarkable, cute and healthy looking but nothing special, mostly wild colour. They were tiny though, which I found rather charming, I've never seen such tiny budgiregars. I haven't seen that mutation again. It was quite striking, it did look like a little zebra budgie and just the one. Never forgot it, reading this I now know exactly what I saw , I wasn't dreaming.

Can somebody help me with telling me what variety my budgies are as ive tried to read up on it and im totally confused. I will upload a pic of them if i am allowed too on here, i have a light green hen and white and pale blue cock.