Parakeets are rarely aggressive by nature: their burst of temper will come and go quickly. They may fight over food, and will often clash briefly over friends, toys or territory; but all of this is normal in parakeet society. 99% of the time, these aggressive outbursts are to do with food, personal space or mating. A cock bird will jealously guard his hen during the nest-building and mating period. A hen can also become aggressive during this period. AS long as things don’t get out of hand, then there’s nothing to worry about.

If you notice that a bird’s aggression is increasingly becoming focused on one individual in particular, it may be time to separate the two. On rare occasions this can be because two birds are simply not compatible, for reasons we still don’t understand. This is unfortunate if they are your only two birds, but for the well-being of both of them, it is best to separate the two and perhaps re-introduce them at a late date, first by putting the two cages side by side and then, if that goes well, allowing them to cohabit once more.

With mating season testosterone bubbling in his brain, a dominant cock bird might try to make life miserable for his neighbours. This can also be the case with a hen during nesting season. It’s important not to overreact in these situations, as this will normally bubble-down once the mating/nesting season is over, and as long as it’s not just one bird having to put up with all the grief, the flock will sort it problems out on its own. If a single bird is being bullied all the time, you may have to remove it while the aggressive one is attempting to be king or queen of the roost. 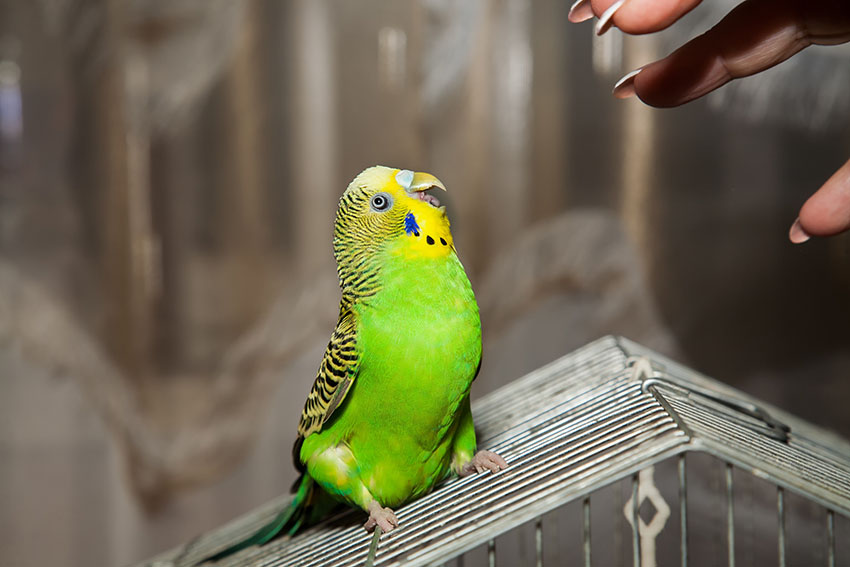 An aggressive parakeet will use its beak as a weapon

A dominant bird, whether cock or hen, will show aggression by squawking and biting. It will often raise its wings as it squawks -- the kind of behaviour you will encounter daily if you own lots of parakeets.

Actually spotting aggression in your birds may be hard for beginners or first time parakeet owners, as these little birds are more often than not hyperactive, vocal and socialising physically without being aggressive. Here are some of the tell-tale signs to look out for: 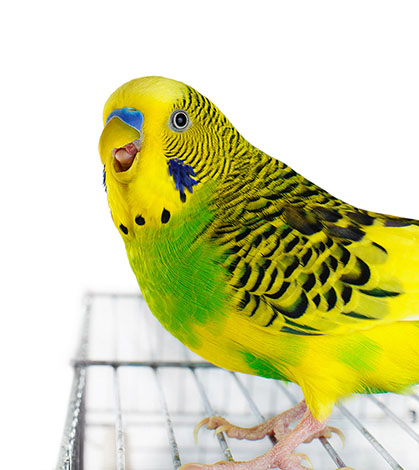 Parakeets will defend their territory if the cage is overcrowded

Hi would like some advice please, we bought a 5 month male budgie which seemed lonely, so by the time he was 7 plus months we purchased another budgie that we believe is a female who was also 5 months , they seem to argue and bicker and sometimes sound very cross with each other, they tend to give a lot of warning peck at each other and the female will jump on the males back and if the male goes to eat , the female will try and stop him, the female constantly pesters the male who is more placid and quiet The female is lively , on the other hand we keep thinking that it’s going to turn nasty and blood will be drawn , be great full for advice as a little worried about them , many thanks !

I have2males both 9 weeks from hatch in the same cage. One of the birds is very loud squawking and dominant in bursts with the food. He keeps scratching in the food and not eating until he is ready. Keeps the other one away. I have lessened there food and sticky taped the lid. I think he is put out by the other bird. He pushes the other bird away. They can perch together nicely.

I have a man female body they are about 1 to 2 or 1 1/2. I have a nesting box they’re calcium blocks and water to multiple food purchases and to swings. It’s a very large cage well not too large but large enough. I have a nesting box in there because I’m trying to breed them. When the mail goes to mount the female she would bite him and his foot he always put it on her shoulders so I was wondering why won’t she let him mount?

birds are 50% dog and 50% two yr old human . most tricks and training can be used for either. in your case redirect your birds attention by spraying him with water which will give him a bath and he will focus on pruning. if he raises his wing he is saying get under here too.