Parakeet food should always be kept dry, and fresh food should be as fresh as possible. Following those two basic rules, you won’t go far wrong. Problems can arise, though, if you store dry food in bulk, as fungus or parasites may move in, spoiling the food and potentially harming the birds too. Sourcing the food from a reputable supplier is a good start, though. 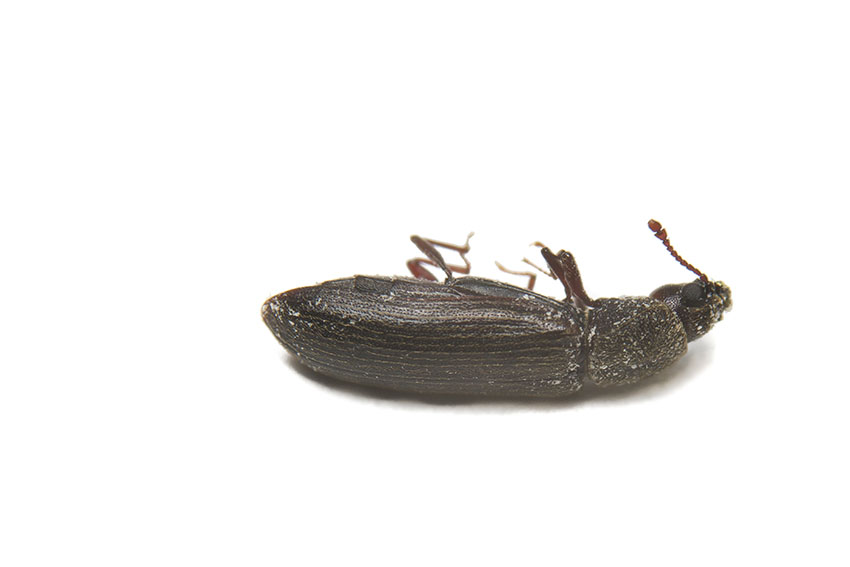 If you can see small creatures crawling through the grain or seed, you’ve got a full-scale invasion of beetles or weevils, or some similar unwanted insect. If the grain smells damp or musty into the bargain, the supplies will have been spoiled by their waste and eggs, so ditch the lot and check with your supplier. Did the fault lie with them, or was it your storage environment that was the problem?

To confirm the presence of pests, if you’re not 100% sure, is to put a jarful of the seed in direct sunlight. The bugs, if present, will quickly overheat and head for the inside of the lid and the sides of the jar.

Flour beetles and weevils tend to gather at the bottom of food containers, so make a quick visual check when the food bin is running low. Wash the contaminated container, and check your other storage boxes. A comprehensive clean of the whole storage space will help prevent an immediate recurrence of the problem. Know your enemy – this one is a grain weevil


Many insect and fungus invaders are potentially harmful to parakeets’ health, and there is also the secondary issue of grain parasites spreading to your own food supplies (flour, rice, etc). If you catch the problem early, you can salvage your supplies by freezing them in batches. This will kill the bugs without harming the seed.

Beetle intruders are often hard to spot. There are a dozen or so species of grain and seed beetle, and identifying the species is less important than taking immediate action.

One common pest is the Saw-toothed grain beetle (Oryzaephilus surinamensis). It can fly, and can sniff out a sack of grain from several kilometres away, so grain can soon become infested. At just 1/10 of an inch or less, the critter is not always immediately obvious.

Grain weevils (Sitophilus granarius) are a common problem, along with the Rice weevil (Sitophilus oryzae). They have a characteristically long weevil ‘nose’, and grow up to 1/5th of an inch long. If your grains are not sealed in airtight containers, they’ll become a playground for these beetles. Check individual grains for tell-tale holes – this is where the weevil larvae have emerged. You will possibly notice the fusty, moldy smell before you spot the long-noised little critters themselves. 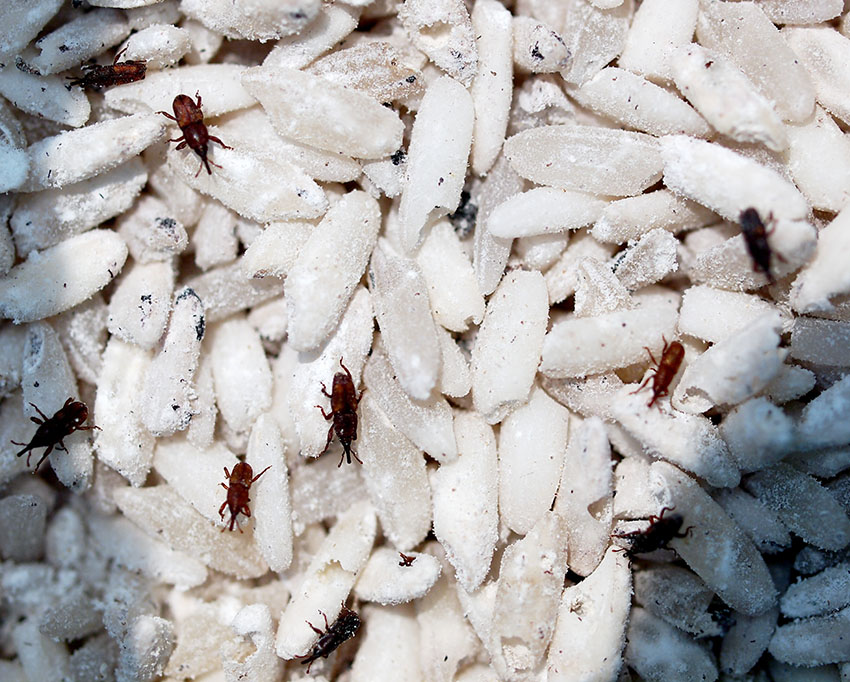 Rice weevils - going against the grain


If you catch the problem early, before the moldy smell sets in (a sign that the whole batch is unusable), you can freeze the seed in batches for 48 hours to kill the beetles. If weevils are the problem, take the seed from the freezer after 48 hours, leave it for two days, and then freeze again to polish off the survivors. Give your storage space a thorough clean in the meantime.

Thread-like lines appearing amongst the grains, sticking them together, are the work of Grain moth larvae (Sitotroga cerealella). They spin a silk cocoon prior to transforming into adult moths.

Adult Grain moths grow up to half an inch long, and these sometimes infest the grain too. The Brown house-moth (Hofmannophila pseudospretella) is another grain pest, of similar size to the Grain moth. Both species lay lots of eggs, and a few weeks after laying you will have hundreds of larvae to contend with - light brown maggots with red-brown heads, as long as the adult versions. 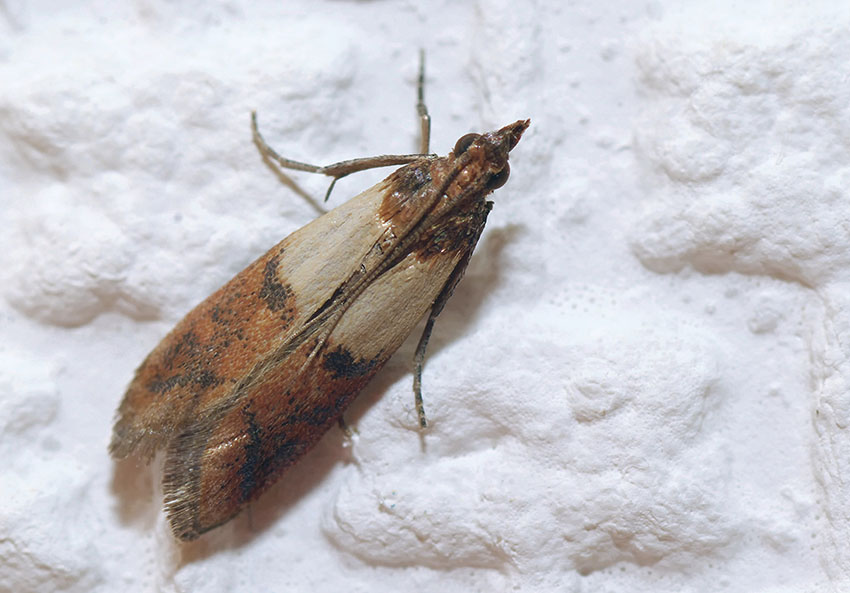 
Moth-infested grain can be salvaged by freezing, as long as the eggs have not hatched – if your seed has already reached the ‘thread-like structure’ stage, you won’t be able to salvage it. The insects themselves are not toxic for parakeets.

Pheromone-based moth traps are one way of tackling the would-be grain invaders, but these must be kept away from free-flying parakeets, to avoid their feathers getting gummed up on the traps’ sticky interior. A candle in a dark room will lure the moths too. A less violent approach is to use a herbal sachet deterrent, although this is more effective for the Common clothes moth (Tineola bisselliella) than for the grain moth. Recommended ingredients include bay leaves, cinnamon, cloves, eucalyptus, dried lemon peel, and black peppercorns.

If your supplies develop a mouldy smell with no obvious sign of beetles or moths, it could be mites. Flour mites (Acarus siro and Tyrophagus putrescentiae, usually) are the commonest culprits, and they are potentially deadly to parakeets if ingested. They’re tiny – tricky to spot in a small bag of flour, never mind a sack of grains. Some are even invisible to the naked eye. The moldy smell is a giveaway, though.

To check for mites, put a pile of grains or seeds in a small bowl or cup, filling the vessel, and making the sides of the mound as steep as possible. If mites are present they will work through the grain in the bowl like earthworms in soil, flattening it out. Sadly, there is no remedy other than ditching your supplies and cleaning your storage space.

Ants and Beetles in Aviaries

Ants are attracted to the food in the aviary, and can reach plague proportions that can cause real problems, especially for nesting birds or chicks. Ant dust cannot be used safely in the aviary itself, as it is highly toxic. You can, however, use it as outside the cage. Cinnamon powder is said to act as a deterrent too – for ants, cockroaches and beetles - and this can be used safely in the birdhouse. Similar claims have been made for powdered bone meal, cayenne pepper, chalk, charcoal, coffee grounds, and unscented talcum. Cucumber peel has a mild deterrent effect too, so that’s also worth trying. 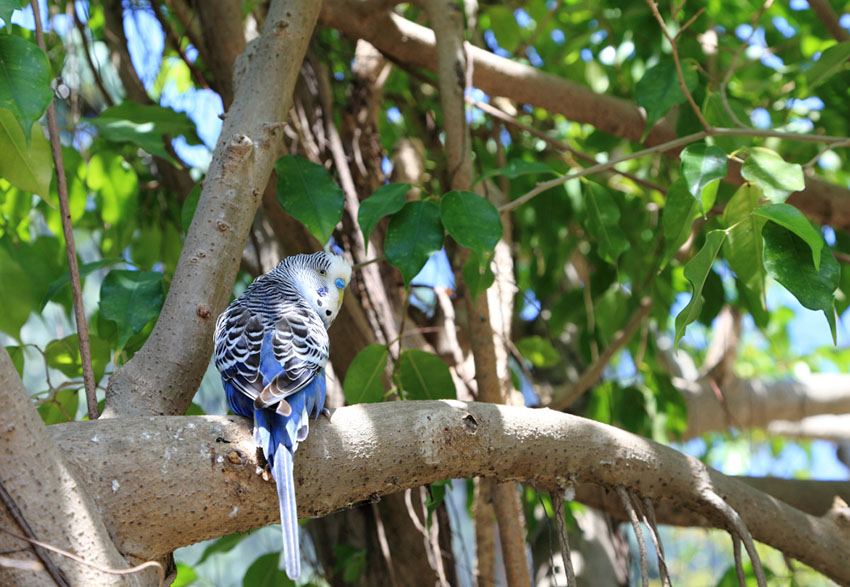 A parakeet in an outdoor aviary – watch out for the invaders!


Cider vinegar mixed with water, or crushed garlic and water, or slightly diluted lemon juice can be sprayed on ant trails, and also on any feeding station where the six-legged pests gather. Ant-infested fruit, etc, should simply be thrown away.

Fruit flies (Drosophila) are another unwelcome guest, and if you spot one, you can guarantee a swarm in a couple of days. You can keep numbers down using fruit fly traps – place containers of wine vinegar or apple cider vinegar in the aviary. These should have lids with holes in, allowing the flies to enter, but making it hard for them to find their way out. It needs to be a lid that the parakeets cannot destroy. They won’t drink or be harmed by the contents, but they will release the prisoner flies.

If mosquitoes are a problem, tackle them at their source. Mozzie larvae hatch out in standing water - open water butts, abandoned buckets, plant containers, garden ponds. Get rid of, or cover, all the water sources you can. A film of vegetable oil on an open water butt works too: the larvae cannot penetrate it to access air, and will drown. If you have a decorative pond, stock it with goldfish or minnows, which will eat the insects. If your pond is more about frogs and newts than carp and Zen, introducing fish will ruin the ecosystem, as they will browse on amphibian eggs. That’s a choice you’ll have to make, if the mozzies are a real problem.

Great info, very detailed and clear,,,have a Budgie and know the basics but sometimes need more information, specially here in Ottawa were there is few places were they take sick birds☹️