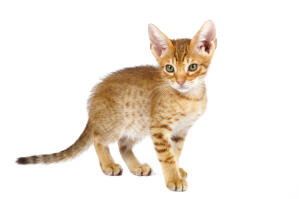 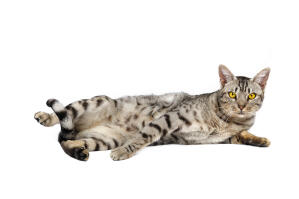 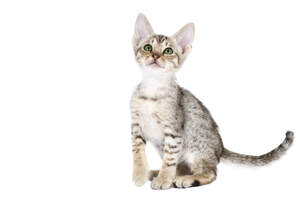 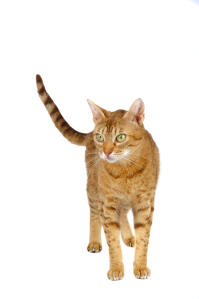 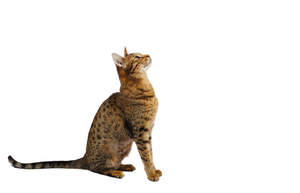 The Ocicat was created by accident by American cat breeder Virginia Daly. She wanted to develop a Siamese with the same color points as an Abyssinian. An Abyssinian called Dalai Deta was mated with a seal point Siamese female called Dalai Tomboy Patter and the resulting kittens looked like Abyssinians.

Daly kept a female from this litter and named her ‘Dalai She’. This cat was bred with a chocolate point Siamese called Whitehead Elegante Sun. Their litter included Siamese and Abyssinian points. Daly repeated this breeding and to her surprise an ivory male kitten with golden spots was produced. Daly named him Tonga, but her daughter said he looked like an Ocelot - Leopardus pardalis, a species of wild cat from South America - and wanted to call him Ocicat, and that name stuck.

Tonga was sold as a pet and neutered, but a well known geneticist called Dr Clyde Keeler became very interested in his coat pattern, as he was endeavoring to create a breed similar to the extinct Egyptian Spotted Fishing Cat.

Following Keeler's enthusiasm, Virginia Daly repeated the breeding that had produced the now-neutered Tonga, and a yellow spotted male was produced. Daly named him Dalai Dotson.

Throughout the 1960s Daly worked on the new breed but progress was slow. Other breeders took up the challenge and became fascinated by the goal of creating the spotted cats. Eventually the breed was firmly established, and TICA granted the Ocicat championship status in August 1986.

Ocicats are devoted pets and very confident. There is no wild ocelot in their mix, and therefore no 'wildness' in their behavior. They love their human families, including the children, and are highly interactive. They want to know what you're doing, and whether they can join in. They are also very agile and enjoy playing - especially if the game involves chasing after a favorite toy.

Comes in a classic tabby as well as a spotted pattern. Colors include silver, brown, blue, black and fawn.