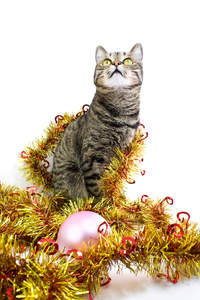 The California Spangles was originally developed as an ingenious way of conserving wild cats. The idea was that by producing a breed whose fur resembled a wild cat's, poaching of wild cats for fur would decrease. The brains behind this idea, Paul Casey, argued that people wouldn’t want to buy a fur coat that resembled their pet cat.

Casey began his breeding program in the early 1970s, and in 1985 the California Spangles cat breed was fixed in the feline firmament. Casey had achieved the wild cat look without actually involving any wildcats. He had adopted an eleven-generation plan to create the breed's distinctive coat pattern. The starting point had been an Angora and a Siamese. He then crossbred their offspring with various other breeds including Abyssinian, British Shorthair, American Shorthair, and Manx. The end result was a cat with a beautiful spotted coat.

Despite its wildcat look, the California Spangles has no wild cat genes, so it behaves like a typical domestic cat. They love to chase moving objects, and that makes them great hunters. Anyone squeamish about the idea of a pet hunting mice and other small animals should therefore beware! Keeping them indoors permanently is not a good option, as they thrive in the outdoors.

California Spangles are playful, active, and intelligent. The latter trait makes them good candidates for clicker training. They have energy to burn, but still manage to be very affectionate pets who enjoy human company.

All California Spangles have tabby spots. They come in Silver, bronze, red, blue, black, brown, and charcoal base color.