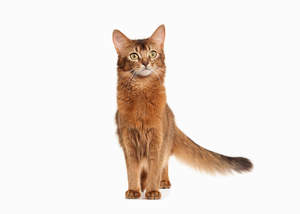 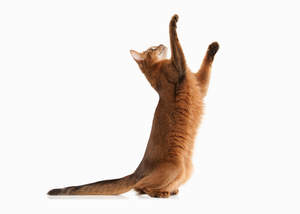 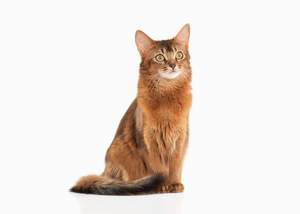 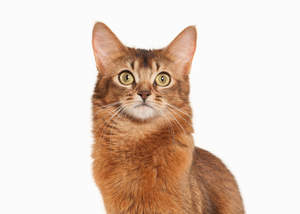 The Somali is a longhaired Abyssinian. You can read the history of the Abyssinian here.

The first Somalis appeared in an Abyssinian's litter in 1940, bred in the UK by Janet Robertson. She exported some of the Abyssinian kittens to Canada, Australia and New Zealand. Many of the ensuing litters had long hair, and they began attracting interest from show judges and other breeders. One of the former was Ken McGill from Canada, who began to breed the cats.

It was US Abyssinian breeder Evelyn Mague who first gave her long-haired Abyssinians the name Somalis. Canadian breeder Don Richings began working with her, using kittens he had obtained from McGill. The breed was recognized internationally by 1991.

Somalis are intelligent and athletic cats. They are very friendly, thriving off interactions with their owner, and always happy to play with toys (especially ones that move around). Like their close cousins the Abyssinians, Somalis love to climb up high, clambering on the top of cupboards and doors or climbing fences, trees and external walls. They are very social, but prefer human company to the company of other cats or animals. They make great family pets, and love the attention they get from kids.

Ruddy, Chocolate, Cinnamon, Blue, Lilac and Fawn and silver all with agouti hair.

Latest Reviews For Somali (1 of 1)

We have owned 4 Somalis. They are fantastic cats, so affectionate, not timid or shy, quite the opposite in fact. Used to take one on a lead to visit people in a nursing home. Very inquisitive, ours climbed ladders, scaffolding, went inside people's vans, sun roofs, super friendly/nosey. Fabulous pets.