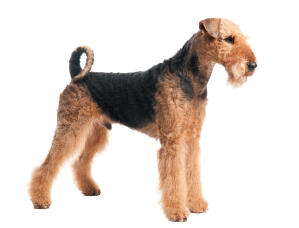 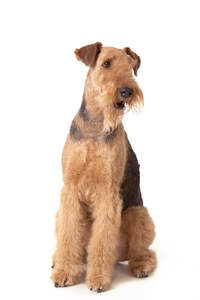 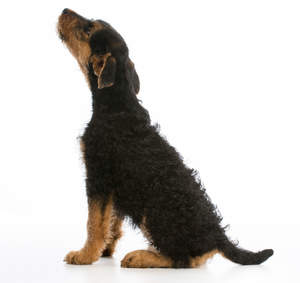 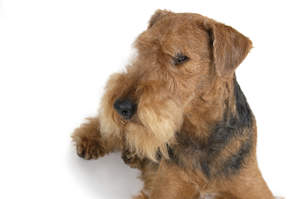 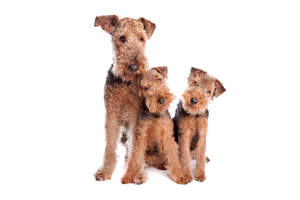 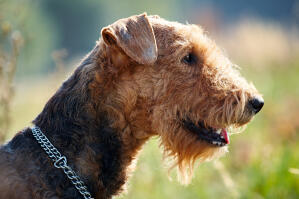 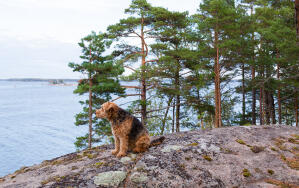 The Airedale Terrier is the tallest terrier, and on account of this is also known as the King of Terriers. This medium-sized breed is descended from Old English Black and Tan Terriers (now called Welsh Terriers). These were used by hunters (and poachers) to hunt a variety of game, including foxes, rats and otters. In the 1800's, these all-rounder terriers were was crossed with Otter Hounds to improve their water-based hunting skills. The result was the Airedale Terrier - a dog skilled at otter hunting, with a fantastic scenting ability. It was originally called the Bingley or Waterside Terrier. By 1900, it was crossed again with Irish and Bull Terriers, giving us the Airedale as we know it today.

In the US, Airedales were first kept and bred in the 1880s. They were used to hunt game, birds, and water fowl, and as versatile working dogs. The first of these American Airedales was a character called Bruce. He arrived in 1881, and went on to win the Terrier class in one of New York's early dog shows.

Airedales are full of character - playful, adventurous, lively, sometimes stubborn and headstrong. Training needs to be firm and consistent (as is the case for most terriers). They are good household pets, even though they can become bored easily. Plenty of mental and physical stimulation will stop this being a problem. When bored, they can become destructive, destroying shoes, toys, and furnishings. Long walks and games of fetch are essential, and they love having a large garden, field, or park to run in, or a river to swim in.

This is an intelligent breed, and in the past it was sometimes used as a Police dog in the UK. They a re able to think for themselves, but, once trained, will also be very responsive to your commands. The breed's dense wiry coat is best stripped rather than clipped, and this should be carried out every two months or so. This makes Airedales quite high maintenance from a cost point of view. Other than that, they require a twice weekly brushing.

The Airedale is a healthy breed, with few health concerns, although as with many breeds, Chronic Hip Dysplasia (CHD) can be a problem. It can also be susceptible to Bloat. Being stoical, Airedales rarely show signs of pain or discomfort, so owners need to keep a close eye on their dog in order to spot such problems.

Airedale Terriers are intelligent, with strong hunting instincts and lots of energy. This makes them great guard dogs. They need lots of stimulation in the form of exercise and training. They are great family dogs, and their energetic nature makes them happy to play with equally energetic children.

Due to their strong hunting instincts, Airedales should be exposed to cats early if they are to get used to them, and you also need to take care when introducing them to other dogs, as they have a tendency to be aggressive towards them.

Common health problems include canine hip dysplasia (CHD), allergies, and bloat. Airedales can also develop dermatitis if their coats are not properly maintained. To prevent this the coat should be hand-stripped professionally twice a year, a procedure that will greatly reduce the amount of hair the dog sheds.