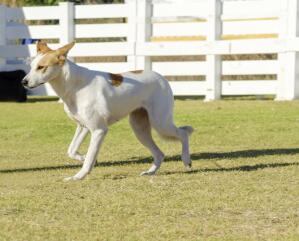 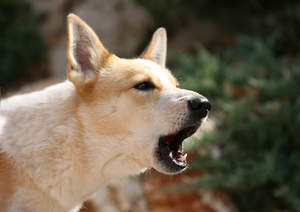 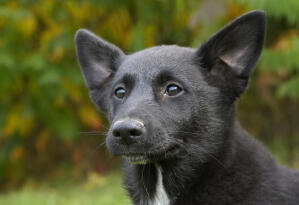 The Kanaan Hund, or simply Canaan dog, dates back thousands of years and is one of the, if not the, oldest breeds still around today. They are a pariah dog and have survived thousands of years in the desert regions of Israel and neighbouring countries. It is believed that it was this breed that the Hebrews used in biblical times to herd and guard their sheep. Until the 1930’s they remained a semi-feral breed.

It was Dr Menzel who first captured these semi-wild dogs and started a breeding program, fully domesticating them. They were used by the military as mine detectors and are also commonly kept as pets and guard dogs. Efforts were made to train them as guide dogs for the blind, but it soon became apparent that this breed is too independent for such work. After their domestication they became very popular in their home lands of the Middle East as working dogs, as generations of exposure to the harsh climate made them very hardy. They were imported to America in 1965, but weren’t accepted into the kennel club until 1997. Nowadays they are still used as herders and can often be spotted at dog shows. Their popularity as pets has also risen.

Kanaans have a strong pack mentality and enjoy being around people who they see as their pack. They can be wary of strangers. They have a natural instinct to guard their territory, this means that it is absolutely vital to socialise them properly from a young age. This includes taking them to lots of different places and socialising with other dogs and people. Taking them out with you on your day to day life whilst they’re puppies will be an immense help. They can be dog aggressive so taking them to puppy classes and later adult classes to reinforce good behaviour around other dogs is important. They like children, but sometimes may try to herd them. They need to be shown who’s boss or they may try to snatch the title for themselves. They are excellent guard dogs and will bark when someone is at the door and walking past your property. Excessive barking can be a problem if not taught from a young age.

Kanaans are very intelligent, active dogs who think independently. Bear in mind that this was a semi-wild breed for thousands of years and have only been domestic for the past 100 years or so. Training with them should be firm, but make sure to keep it fresh and to introduce new commands and tricks regularly, otherwise they’ll get bored and not listen. Games and food/reward based training is most effective with them. They enjoy learning as it helps keep them mentally stimulated and prevents boredom. They do very well in obedience, tracking, herding and many other competitions. They are classed as a working breed and physical activities will always go down well with them. They’ll enjoy playing with you, though they can sometimes be a bit rough, nothing more than a gentle bite to the arm or leg however so there’s no need to worry. They can be defensive of their owners, but are not usually aggressive towards people unless they physically attack them or their owners.

This breed will need a fair amount of exercise each day. Whilst they’ll be perfectly happy to sleep on your couch/at your feet, this is by no means a lazy dog. At least one very long walk a day is needed, though two is preferable. They can also make great jogging partners. Agility competitions are a good way to fully tire them out, they also thrive on the fast pace and praise that they receive.Try incorporating training exercises into the walk for better results.

This breed is not prone to any hereditary ailments and is classed as very healthy. Grooming is simple, they’ll need no more than a weekly brush to remove dead hairs.

Canaan Dogs have a smart and independent temperament. With them being very agile dogs with seemingly never-ending stamina, it is very important that they get a chance to exercise vigorously everyday or you may run the risk of having a bored and destructive dog in your home. Don’t expect huge amounts of affection from these dogs, whilst they do form a close bond with their “pack”, they aren’t really the cuddly type. They aren’t too fond of strangers, but are rarely aggressive, preferring to bark and back away. To prevent dog aggression, which can be a big problem in Canaans, early socialisation is key.