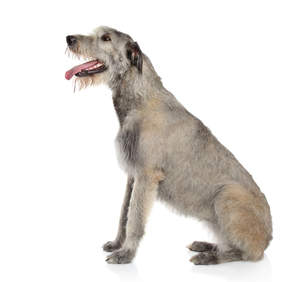 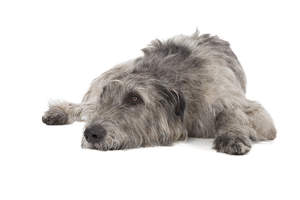 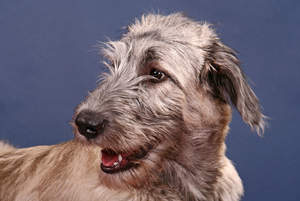 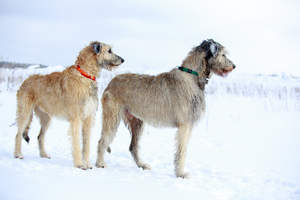 Very large dogs were often prized for their imposing stature and, due to the fact that they checked almost all the boxes, Wolfhounds were gifted to the Romans by the Irish. This breed dates all the way back to around 400AD, when they were bred to fight animals in Roman Arenas. They were a very popular breed in Ireland, often packs of these dogs would accompany hunters to bring down wolves and irish elk. By the late 1700’s, the Irish wolf population was almost non-existent, and because of this the Irish Wolfound’s numbers also plummeted. Sometime in the 1800s, breeding programs were started and by the 1870s, Irish Wolfhounds were being exhibited in dog shows.

The term “gentle giant” perfectly describes this breed. They are a very calm, placid and easy going dog. They are calm in the house and will happily sleep given the chance (and a comfortable bed). They enjoy being around people, but aren’t exactly the most cuddly of dogs. This doesn’t mean that they aren’t affectionate and loving though. They tend to get on well with other dogs, though some sometimes have a tendency to chase after cats and other smaller animals. With such long legs, the Irish wolfhound is an incredibly fast runner.

Training with these dogs needs to start from an early age and even after they are fully trained, it is still best for them to be walked on a leash or in a safe, enclosed area. They are quick learners, but can be stubborn at times. As with most dogs, they dislike being left alone for long periods of time and will seek to entertain themselves if they do get too bored. Their great height means that all food needs to be safely hidden away. Even the top of the fridge is risky. They can be greedy and will need a fair amount of food each day in order to satisfy their hunger. They are usually fine with children, though they do have their boundaries and won’t be appreciative of much “rough” play.

Hip Dysplasia and Bloat can be a problem for the breed, but this isn't that common. Damage to the tip of their tail is. Brushing a couple of times a week should be enough and a trim when the coat gets too wild.

The Irish Wolfhound has an easy going, laid back temperament. Like most big dogs they are very sociable and tend to be great with children and other dogs alike. They form a loving bond with their family yet show little to no interest in strangers, they can make great guard dogs if need be. 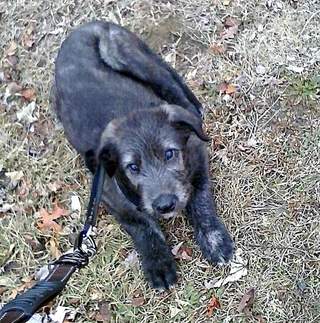 Latest Reviews For Irish Wolfhound (1 of 1)

We will always have Wolfhounds - Cynthia, California, 12 February 2021

The Irish Wolfhound is a magnificent dog and is wonderful with children. They are a friendly dog and easygoing but when provoked will protect their family with their lives. They are good with other dogs but must be trained from an early age to cohabit with smaller animals like cats. It’s important to remember they are sighthounds and their instinct will kick in so do not let them off leash unless they are in a large fenced area. They need space and exercise so ample fenced property is ideal. Exercise when they are puppies must be limited as they grow due to their size and the rate of their bone growth. They are slow to mature. Some dig and some don’t. When they do, the holes they dig are large! When in training, they do not do well with harshness and aggressiveness. Just because they are large doesn’t mean they need a heavy hand. Be patient, positive, and kind. They are a sensitive breed. Being a giant breed, their life spans are shorter than your average dog. Please educate yourself about their health issues before committing to owning one and find a reputable breeder who follows all health testing guidelines.