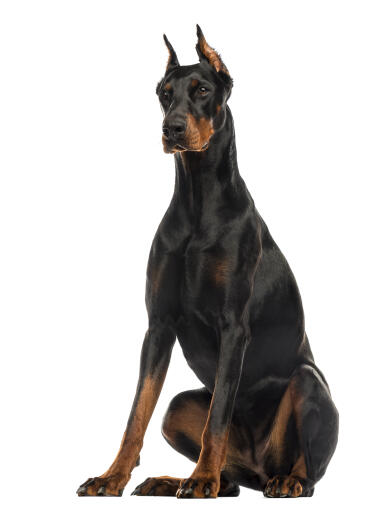 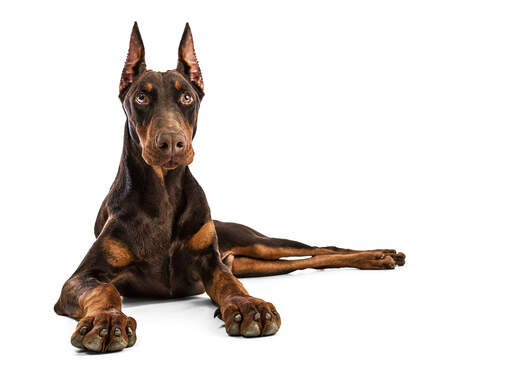 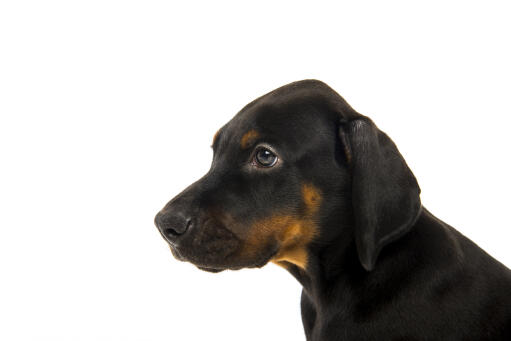 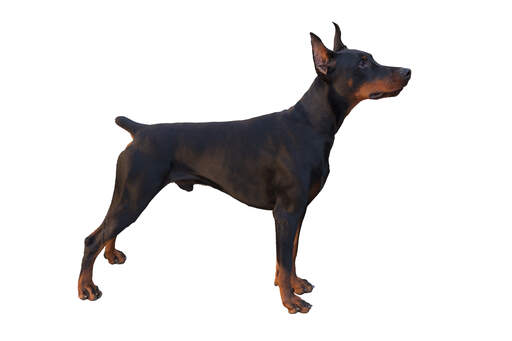 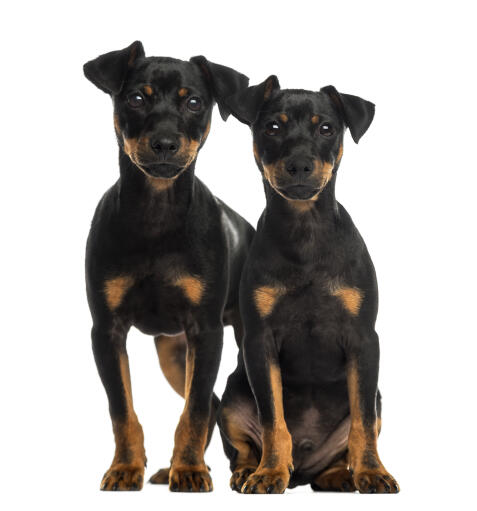 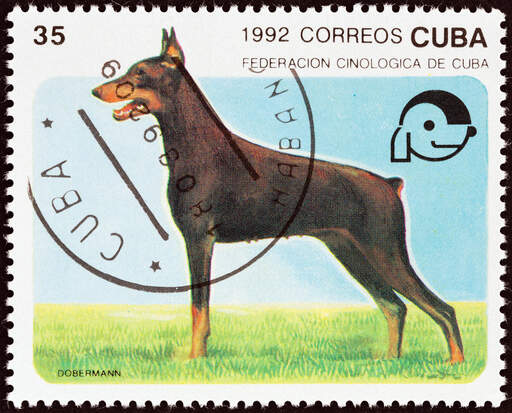 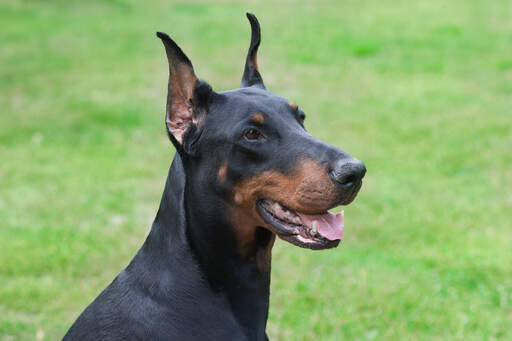 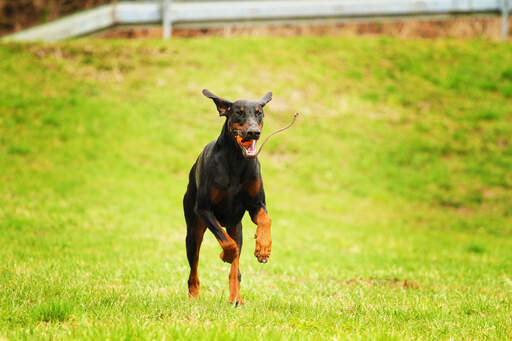 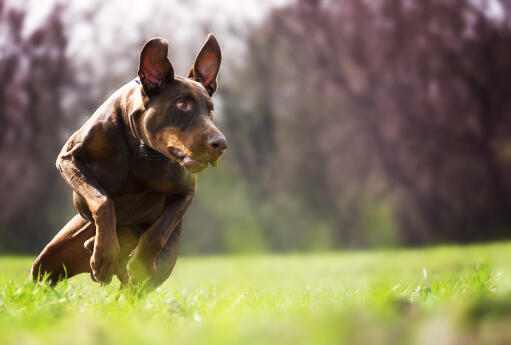 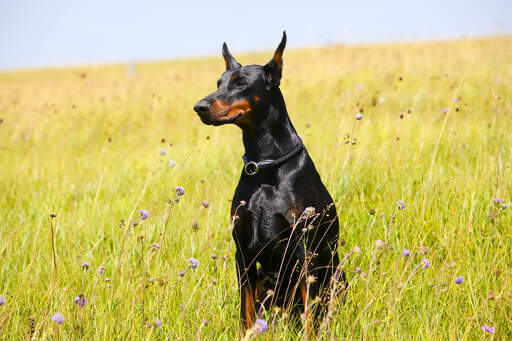 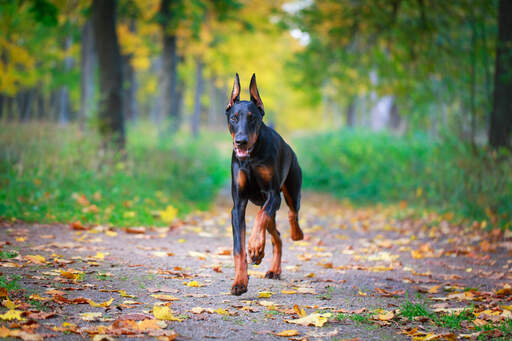 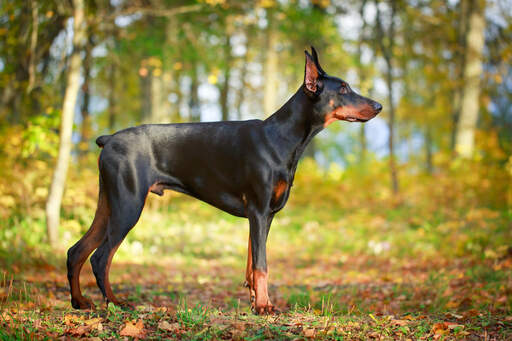 The Doberman Pinscher, or Dobermann, was created by Louis Dobermann from Thueringen in Germany around 1890. His aim was to have a guard dog that would assist him with his job as a door-to-door tax collector – the Dobermann’s main task was to look intimidating! The breeding process is thought to have involved the Old German Shepherd and German Pinscher breeds, and then crossing again with Weimaraners and Manchester Terriers. Breeders continued to develop the stream-lined, sleek dog familiar to us today.

Dobermanns are used in many roles, including police dog and guard dog (and for various supernatural duties, according to certain horror films, notably 1976’s The Omen!). In World War II, the U.S. Marine Corps adopted the Doberman Pinscher as its official war dog. The American Kennel Club revealed that Doberman Pinschers were the 12th most popular dog breed in the USA in 2012 and 2013. It is only in the US and Canada that the Pinscher tag is still used – it is the German word for terrier, and was dropped elsewhere because the breed has moved a long way from any of its terrier roots.

The Doberman Pinscher is trusting, loyal, alert, and always ready to protect its family. This is an intelligent breed and needs constant mental stimulation to keep its minds busy (and to keep its owner’s furniture safe!) They are very good at obedience training, and they ned to remain physically active with regular walks or long runs. They tend to be aggressive towards strange dogs and wary of strangers, something that stems from their guard dog roots. Socializing and regular training is important to prevent them from becoming domineering. One trained, however, the Dobermann makes a wonderful pet.

This is a large dog that often forgets how big it is, happily climbing on to the sofa and trying to sit in your lap. They love cuddles and are affectionate and sensitive towards their families, including children and other pets. Portrayed in movies and folklore as aggressive, even evil, this is terribly unfair, as the Dobermann’s looks are at odds with its big softy nature. Again, regular training is the key to this popular breed, to give all that muscle something to do. Having a very short coat, grooming is minimal, and the occasional brush will suffice.

Doberman Pinschers are alert and loyal. As a naturally athletic and muscular dog, it needs plenty of daily exercise to prevent it becoming restless and destructive. Originally bred to be a guard dog it is important that they are socialised early and frequently to produce a nicely rounded pet.

How they will behave with other dogs and smaller animals depends very much on the individual Dobermann, and on early training too. They tends to be reserved with strangers and are sometimes suspicious of anyone outside the family. As a guard dog, most of their work is achieved by simply standing still and looking like a Dobermann!

The Dobermann is a healthy breed and rarely suffers major health issues. As with most breeds, there is a chance of canine hip dysplasia (CHD), Wobbler syndrome (pressure on the spinal cord that causes a wobbly walk), blood clotting disease, bloat, and cardiomyopathy (disease of heart muscle).