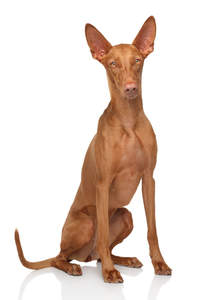 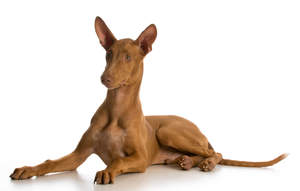 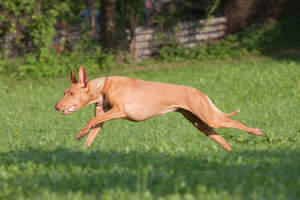 The Pharaoh Hound comes from Egypt and dates back centuries. Little has changed over the years and they still carry the sight/hunting hound traits they had back them. The breed was exported to Malta and soon became popular with the locals thanks to its great ability to hunt rabbits. They are now the national dog of Malta. The breed is unusual as they can blush when excited and like to smile when they are happy.

The Pharaoh Hound is well suited to family life and tends to fit in well with most situations. They love attention from the people around them and will go out of their way to seek it. They get along fine with children and larger dogs, though smaller dogs and other pets can be seen as prey in their eyes. If they are introduced as puppies this shouldn't be a problem. They can be shy around strangers, so introducing them to as many people as possible during their early years will help them. They are a playful breed that can get up to mischief, but this is all part of their endearing quality. They will try to get your attention whenever they can. This is a sensitive breed that dislikes any form of confrontation between people and may try to break up an argument by barking. Pharaohs like to chase things. No matter how well trained your dog may be, if they see something (they’re sighthounds so it’s almost certain that they will), they'll be off.

Pharaohs have heaps of stamina and can chase after something for miles on end, completely ignoring your calls. They are able to jump over and dig under fences. Their hearing is good and they may often bark in response to a sound you didn't even hear. Their stamina makes them good jogging/running partners. They are smart, but will often use this to get their own way. Training is relatively straight forward, the only problem being recall. They will react badly to harsh words or treatment, so approach training with a positive attitude and lots of treats as rewards. They can do well in agility and lure courting, though any chance to get outside and run will be welcomed with open arms.

Due to their thin build, Pharaohs don’t fare too well in the cold. In the winter months they’ll need a jacket and some soft bedding/ a duvet to sleep on. If they aren’t happy with your arrangements, they’ll take it upon themseves to find the cosiest place to sleep (i.e. your bed). Their coats only need the occasional brush to remove dead hairs. They have thin skin which can be prone to cuts and scratches. They are very sensitive to anaesthesia and some are prone to allergies and skin rashes.

The Pharaoh Hound is a graceful and independent breed. They are a well defined dog with string hunting instincts which can make them a bit of a struggle to walk off lead. They will chase anything they see, hear or smell.

In the house they’ll be big softies, often coming up and cuddling with you. They are good with children and other dogs larger than them, though they don’t really seem to care all that much about making new canine friends. They are difficult with cats due to their hunting instincts.

Generally they are a healthy breed, but may occasionally be prone to bone fractures, allergies and epilepsy.