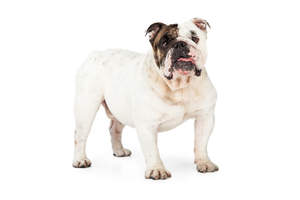 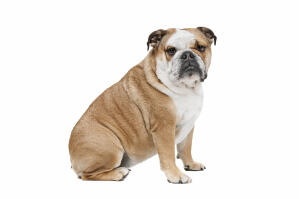 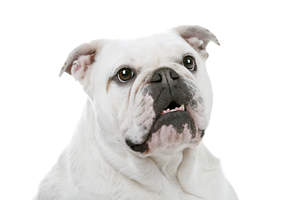 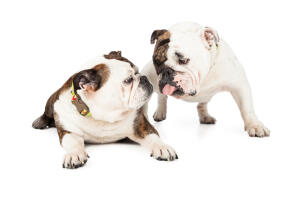 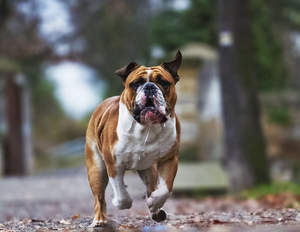 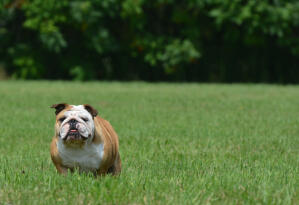 The English Bulldog was bred in England in the 12th or 13th century for the sole purpose of fighting bulls. Bull-baiting was a common sport in Medieval Europe, and the ordeal was thought to tenderize the bull’s meat before slaughter. The Bulldog was bred with a squat face to enable it to bite the bull on the nose and not let go. Bull baiting was made illegal in England in 1835, but the popularity of the Bulldog and its image as a tenacious and pugnacious character continued to appeal to English breeders.

These characteristics came to symbolize a certain wartime island spirit, as epitomized by Winston Churchill (whose features bore a resemblance to the famous dog). The bulldog had been used in political cartoons since the 18th century to represent England, and the breed became the must-have pet in Oxford and Cambridge Universities in the 19th century. All of which resulted in the dog becoming an increasingly popular pet, after the demise of bull baiting, and a symbol of England.

Meanwhile, the English Bulldog was bred into something of a caricature of its original body shape, with huge jowls and bent legs. This has not been without its repercussions for the breed’s general health.

The English Bulldog is the ultimate couch potato of the dog world, and will happily spend the bulk of the day asleep and snoring. It is a calm, placid and good natured breed, great with children as long as they don’t tease or mishandle the dog. They have a famously stubborn streak, and once a Bulldog has made up its mind to do something – or not do something, more to the point – it is hard to persuade it otherwise. This doesn’t stop them craving attention, though, and they are very family orientated. Bulldogs generally get on well with other pets but can sometimes be aggressive towards other dogs if they have not been properly socialized.

Bulldogs enjoy short walks, little and often. A long hike or a jog are not the kinds of activity a Bulldog will be able to take part in. A Bulldog who has had enough will simply stop and sit down, and nothing, not even treats, will get him moving again. These dogs enjoy chewing, so it is best to hide any shoes and children’s toys, and to provide plenty of dog-friendly chews and raw hide type bones. English Bulldogs drool and slobber a lot, especially after eating, and they will need their faces washing most days, due to the deep folds in their skin that their tongues cannot reach.

Training these dogs is a challenge, as they are very slow to learn anything. Due to breeding to achieve the flat nose of the classic Bulldog, they sometimes develop breathing problems. They will wheeze, snore, and snort, but for owners this is all part of their charm. They dislike warm weather and will always seek a cool spot to take a nap. Bulldogs are one of the few breeds that cannot swim.

English Bulldogs are docile and happy dogs. However, their stubbornness and strength mean that once they have decided to do something, you will have a tough job getting them to do something else.

This breed is generally great with children and other pets, and they need a lot of goading before they display any aggressive behavior. A gruff woof is the warning sign, and they may also greet strangers in this way. A swift, brisk walk each day is all this dog needs – the rest of the time will be spent snoring the day away.

English Bulldogs are prone to brachycephalic syndrome (breathing problems), various eye problems, and a high risk of overheating if they exert themselves too much. They may also develop canine hip dysplasia (CHD), elbow dysplasia, luxating patella (dislocation of the kneecap), invertebral disk disease (pressure on the spinal cord that can cause paralysis), heart disease, and allergies. 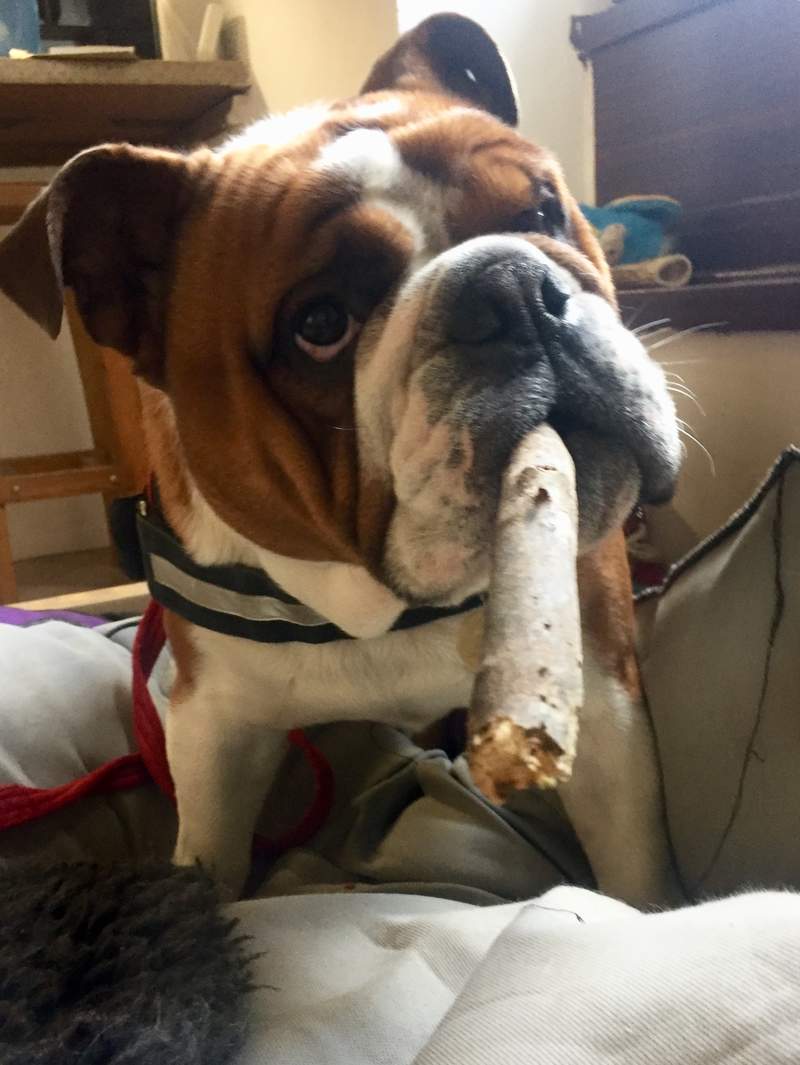