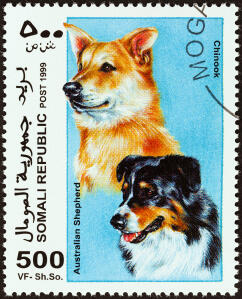 This breed started life in New Hampshire when Arthur Walden bred his husky with a mastiff in an attempt to produce a sled-pulling dog. In 1917, one puppy going by the name of Chinook became the stud dog for all future generations at the time. They are excellent at pulling sleds and were used in Byrd’s 1929 Antarctic expedition. Nowadays the breed is very rare, with under 100 puppies being born annually. They are mostly used as pets, though some people still keep them for their sled-pulling abilities.

The Chinook is a calm, friendly and easy going dog. They make good pets and will be wonderful with children if raised together. They can also live with other cats and dogs, again, if they were raised together or have known each other since a young age. They can be wary of strangers and sometimes quite protective of their family if a stranger enters the house. Socialization from an early age will help curb this and result in a friendly, well-rounded dog. They shouldn’t be shy and are rarely aggressive towards other people. They will be calm and mellow in the household and given half a chance will curl up next to you and happily doze off. Chinooks enjoy learning new things and will feel good if they please you. They work well individually, but thrive in a pack. The pack doesn’t have to be other Chinooks, but can be other breeds or just other members of the household.

They were bred to pull, so lead training will be more difficult with them. Their first instinct will be to pull you along, so you will need to concentrate on this first. They are a more vocal breed and will make a variety of sounds, from barks and whining to mini howls, so the “quiet” command should be another priority. This being said, the Chinook is an attentive breed and does very well with sledding, agility and odebdeiocne training. These dogs need daily exercise, they like to run so taking them along with you for your morning jog is a good idea. Recall doesn’t tend to be a problem, meaning that they can usually be walked off lead in safe environments. They are friendly with other dogs if used to them. Puppy training is also recommended for better social skills. They enjoy digging and will often make a hole for themselves to nap in. This can be detrimental to the garden, so keep this in mind.

The short coat is easy to maintain, apart from the moult twice a year, during which extra brushing will be needed. Like many other rare breeds of dog, the gene pool is limited so hereditary issues may arise. Carefully checking the pedigree when getting a puppy will help iron out most major problems. Epilepsy and Canine Hip Dysplasia can be seen in some adults.

Chinooks are very sociable and loving dogs. They are good with children. They are bred for sled pulling meaning that they will have lots of energy and will enjoy running around and enjoying new places. That being said, they are not workaholics and will happily cuddle up to you on the couch at almost any chance.

Chinooks can suffer canine hip dysplasia (CHD), patellar luxation (dislocation of the knee cap), and some other hereditary problems resulting from their narrow gene pool.