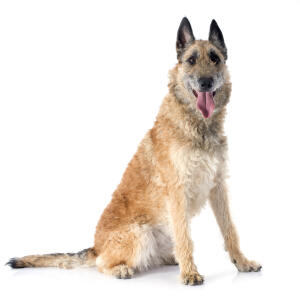 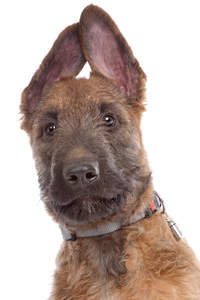 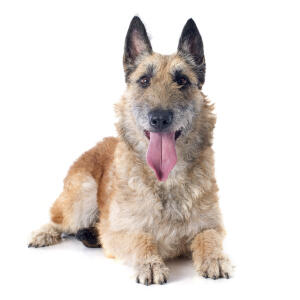 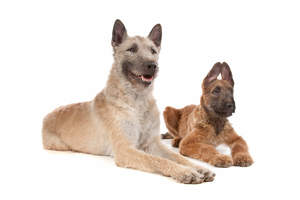 The During the First World war, the bred was originated in Belgium, one of four breeds descended from the 19th century 'Belgian Sheepdog'. It is a herding breed, and was developed to both herd and guard sheep, and were also used to guard valuable linen hung out to dry at Royal courts. They were as messenger dogs in the First World war, and it was here that their great intelligence was fully appreciated. They are the oldest of the four Belgian shepherding breeds, and the rarest.

The Laekenois is alert, loyal and protective, and thrives on working with people. This makes them a popular choice with Police forces and security firms, but they are equally suited to life as a family pet. They have an instinct to herd small children, but this can be prevented via good training from the time when the dogs are puppies. They to be socialised early to get them used to new people, places, and sounds. They are usually fine with other dogs and cats in the home, as long as they have been introduced at an early age. They are initially wary and suspicious of strangers, but if well trained hey will bow to your will and accept anyone you invite into your home.

The highly intelligent Laekenois is used as a Police dog, often for sniffing out drugs and in a variety of other areas. You can almost see their minds ticking over, working things out, and they have to be kept mentally active. They do not respond well to harsh correction or harsh training methods. They love to please their owners, and this is your secret weapon when training them. They have a reputation for shyness and aggression, but these are only issues if they have not been socialised early. They are dependable, and yet fearless when they need to be. They certainly require a strong leader to show them who is boss. Play works well, as does positive reinforcement and a loving, affectionate approach to training and learning. They excel at agility, flyball, herding, obedience and protection-based events in competitions.

Laekenois need lots of exercise and can become destructive if left alone and inactive. They like to stay close to you and are therefore fine walking off-lead in a secure area, as recall is not a problem with this breed. They are great jogging partners, and need at least an hour of strenuous exercise such as this each day if they are to remain happy and physically stimulated.

The Laekenois' coat is rough and a bit scruffy looking, wavy but not curly. The coats need stripping twice a year, but not clipping. Brushing every few days keeps the coat in good condition and removes any debris.

They also have the advantage of being, generally speaking, the healthiest of the Belgian Shepherd breeds.

The Laekenois is obedient and protective. The dogs do well when integrated in a family, forming tight bonds and with strong protective instincts. This makes them naturally suspicious of strangers, and also means they are good guard dogs. It is important to socialise them early and give them regular, consistent training so they know their place in the family.