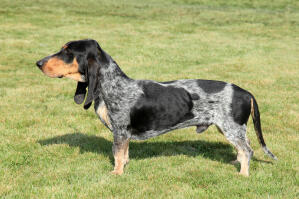 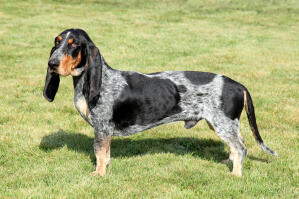 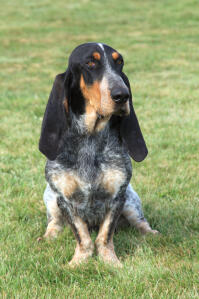 The Basset Bleu de Gascogne is a French hunting dog. It was developed from the Grand Basset de Gascogne which has been around since the 15th century. After the French Revolution, commoners were allowed to go hunting, for the first time in French history, and the breed was developed for hunting on foot, rather than on horseback. This required a slower dog to track and hunt without leaving the hunters behind. The breed became very rare, but enthusiasts have brought it back from the brink of extinction. Basset Bleu de Gascognes are rarely seen outside France, though. It is recognized in the US by the United Kennel Club.

Basset Bleu de Gascogne (BBDG) is a chilled-out breed in a domestic setting, but excitable and eager to chase when outdoors. Like the other Basset breeds it has a fantastic sense of smell and will rush off, nose-to-the-ground, in search of quarry given half a chance. BBDGs are good around children and strangers, enjoying human company. This need for human contact, though, means they pine if left alone for too long - although periods of just a few hours out usually fine. They tend to get on well with other dogs and cats. If bored, they vent their frustration on their surroundings and can be very destructive.

BBDGs are a bit slow to learn, as they are rather stubborn (rather than not very intelligent). But with a firm and yet fair hand, and consistency in the training, they do eventually learn all the commands they need. They are food-driven, which is always very handy when training a dog. When out walking, you will need a long lead, as once a BBDG latches on to a scent, it can vanish with surprising speed, hot on the trail. Walking them in a secure area is another good idea, as that way they can't stray too far. Once they get a scent in their noses recall becomes a bit hit and miss, but proper training should boost their recall obedience.

At home, BBDGs are couch potatoes, lazy and happy to snooze away the day on a sofa. This means they need plenty of exercise to prevent then becoming overweight. Once outside they seem to come alive, and are suddenly able to tap into lots of spare energy. They have a low-pitched bark, which has been described as almost melodic, and foxhound-like baying is common with the breed too. This is loud, which may be an issue!

In terms of grooming, Basset Bleu de Gascognes are very low maintenance. Their coats are short, and a quick weekly brush will get rid of the small amount of loose hair.

The BBDG is a healthy dog, and copes well with most issues. One common problem, however, is their back, which can cause them problems when they get older. They are slightly elongated, and heir spines come under a lot of pressure. It is advised not to make them climb up and down the stairs too much, to minimize the damage to their backs later on. The same goes for jumping off furniture, etc.

Basset Bleu De Gascognes are sociable and easy going. They love to spend time with their human companions. In the great outdoors, though, they are slaves to their noses and will follow an interesting scent wherever it takes them. They usually enjoy meeting new people and animals, as long as they have been socialized early. This contact with others helps them become rounded and confident characters rather than timid or aggressive.

Basset Bleu De Gascognes an suffer from canine hip dysplasia (CHD), luxating patella (dislocation of the kneecap), back problems including intervertebral disc disease (pressure on spinal cord, which can cause blindness), elbow dysplasia, and allergies.