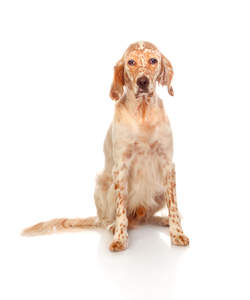 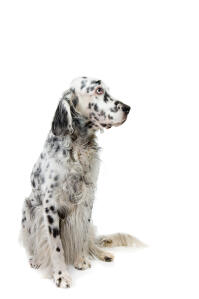 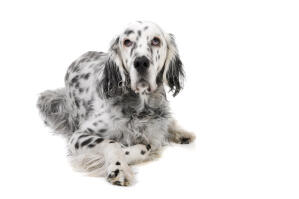 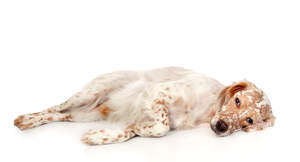 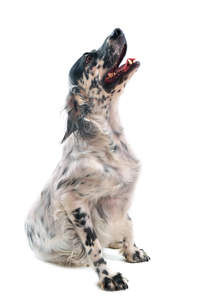 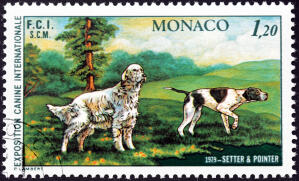 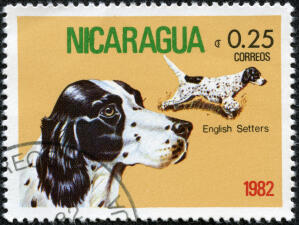 English Setters were being developed as a breed at least as early as the early 15th century, making it one of the oldest Setters used for hunting and “pointing” game. Originally called “Setting Dogs”, they were trained to find game and then freeze to “point” the hunters in the right direction.

Genetically, the modern version of the English setter seems to be a mix of Springer Spaniel, Spanish Pointer, and Water Spaniel. They were intensively bred around 1825 to produce a standard pointer-type dog with boundless energy. They are methodical in their search for prey and instinctively freeze when they find it, rather than giving chase.

English setters are strong willed and people-friendly. They can walk and run for miles and are never happier than when out on a walk. As long as they get enough exercise, they are laid back and happy to hang around in the house and jump on the sofa for a cuddle. They are generally friendly with other dogs, strangers, and other pets. As long as they are well trained and socialized, they are good with children.

A Setter that doesn’t receive enough exercise can become very boisterous in the home. They have a long puppyhood, not fully maturing until they are at least two years old, sometimes older. Training needs to be firm and consistent. They are responsive to familiar commands, and also recognize their owner’s moods with great sensitivity. They make excellent therapy dogs, being devoted and fond of companionship. An English Setter needs to run around a lot to wear itself out. They excel in agility and field trials and games such as flyball.

Grooming these dogs takes time, particularly the ears and feathering on the body and tail. Brushing a few times a week, plus a regular trim, will keep the coat looking in top condition.

There are two types of English Setter: hunting dogs and show dogs. Show dogs have a much longer coat than the ones bred for hunting.

English Setters are lively, easy-going, sociable dogs who crave attention. They hate being left alone for too long and are liable to shred the furniture in these circumstances. They are family oriented dogs and are great with kids and other dogs, and with other pets too, as long as they are socialized early on.

This is a very intelligent breed with a long memory, and they respond best to positive reinforcement when training. Push them too hard and they will show you their stubborn streak and refuse to listen and learn.

English Setters are prone to canine hip dysplasia (CHD), elbow dysplasia, deafness, epilepsy, progressive retinal atrophy (PRA: degeneration of the retina, which can lead to blindness), Osteochondrosis Dissecans (OCD: excessive cartilage build up at joints, which can lead to lameness and joint swelling), and deafness.