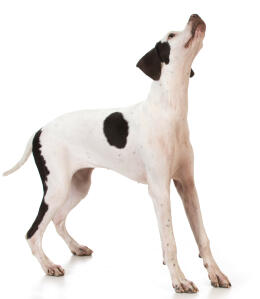 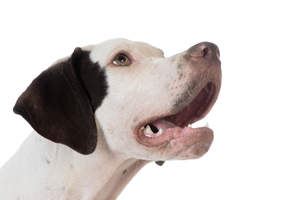 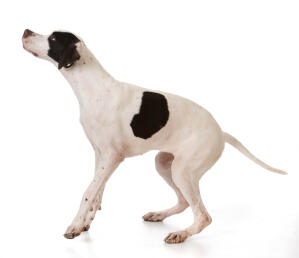 The Pointer, also sometimes called the English Pointer, dates back to the 17th century and was likely a result of cross breeding between Spanish Pointers and Foxhounds, Bloodhounds and Greyhounds. This combination produced an athletic dog that would locate game and point its location to hunters. They would ofen point at hare, then the greyhounds would be released to catch them. Later on down the line Setter blood was added to the mix to even out the temperament and produce a great working dog and loyal family companion.

The Pointer is a loving, loyal and even tempered breed. They are well suited to a very active family. They are fine with other dogs, cats and children and are rarely aggressive. They can sometimes be mischievous, and if this does happen then it means that they are bored and need something to do. Their minds are active and they need something to stimulate them to prevent boredom. They will need some socialsing as puppies, but in general are a happy and welcoming breed. If they are left alone for too long they’ll start to seek out their own entertainment, this usually means chewing up something of yours.

Training with this breed needs to be consistent but at the same time loving, as they don’t react well to harsh words. They were red to think for themselves and it may take some time before they get the jist of what you want from them. They work best with food rewards and positive reinforcement, though they can be stubborn at times. Integrating training into play sessions works well as this will also help keep their bodies active. Their pointing instincts can take hold from around 8 months. They are working dogs and need leadership as they were bred to follow commands. Their recall is excellent.

Pointers need a lot of daily exercise. A quick walk around the block will do nothing to their energy levels, they need to run. At least an hour of running a day, preferably more, is needed to keep them happy. Playing with other dogs will also keep them active and give them the chance to sniff about their surroundings. Once they sense something, pointers will freeze and point at it. It’s best to keep an eye on where they are, as once they spot something they won't make a noise. Competition is another way to keep them happy and stimulated, and in general they perform really well in said competitions. Once they’ve received the exercise that they need, pointers will happily curl up right next to you and fall asleep. The more exercise you give a Pointer, the happier it’ll be.

Their smooth coats are easy to clean and only require the occasional groom with a stiff brush. They are average shedders.

The Pointer possesses a courageous and gentle temperament. They love their family and are accepting of other animals and strangers. They need regular exercise to keep them calm inside the home. They can sometimes be too energetic for young children and elderly people. Be sure to give them plenty of exercise and socialisation to produce a well rounded and satisfied dog.

In terms of health they are a sturdy breed, though Canine Hip Dysplasia, Skin Conditions and Epilepsy can sometimes be seen in the breed. Their low hanging ears means that they can be more prone to ear infections. Elbow dysplasia, progressive retinal atrophy (PRA: degeneration of the retina which can lead to blindness), allergies, hypothyroidism and heart disease are sometimes an issue too.

Latest Reviews For Pointer (1 of 1)

I'm really pleased with my Pointer puppy, your guide is spot on, she is very friendly, full of boundless energy and prone to be naughty if not exercised, so the first few weeks, pre-vaccinations, have been a challenge. Fabulous characteristics, eager to please, gentle and responds very well to praise, we live in muddy Lincolnshire, and she's very easy to clean after her walks. Perfect with my 2 granddaughters and although she's still a little jumpy she's so light this isn't a problem and she learnt jumping up is not acceptable within half an hour. I would highly recommend this breed, but you do need to know what you are getting into, she definitely isn't low maintenance, but am loving the extra long dog walks, as it's getting me fit too!